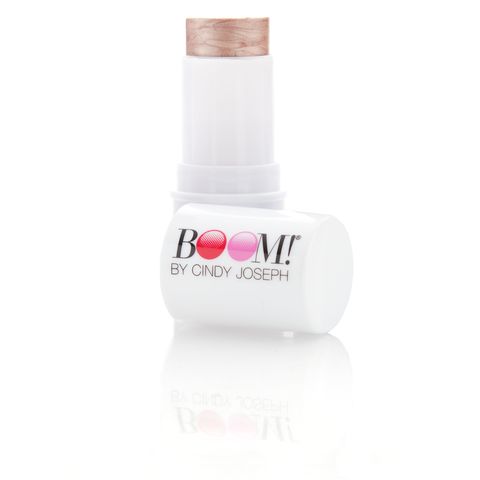 Bought this for the first time a year ago, and it has become an essential part of my morning routine. I don't wear makeup, but on a day when I don't want as much color as the Boom &quot;Color&quot; (which I also use and love), I find the &quot;Glimmer&quot; works magic with just a very tiny amount swiped over the cheekbones. It blends in with just a touch, and gives exactly the right amount of glow to my skin. I've just bought another tube (which gives an idea of how long one small tube can last), and plan to keep using this forever.

I just can't seem to find a good use for this product. I wear makeup despite what Cindy says we should not do as we mature, so once I apply my makeup and powder this glimmer just smears it all away under my cheekbones. I find the color for me to be to beige tone for my olive skin tone. I catch myself in the mirror and it is not flattering for me. Maybe for the eyelids but it contradicts what she says about using gloss or anything near the eyelid corners as it adds texture to already crinkly area. Its way to shiny for me and even if I put it on my lids extra carefully it does not stay on at all as a powder does. I'm 74 and still like the way I look with makeup and I hate it when people make me feel guilty and to old for using make up. Well they try but I don't listen. I see no reviews for her boom silk so let me say that I have bought that product twice. I thought I really loved it but I do not. I do not hate it but I do not love it any more than any other product I have tried. I often wonder, and wonder if other women feel this way, does it actually penetrate your skin??? It just seems to moisturize the top I guess but it never rubs into the skin, just kind of lays on top. I have not noticed any difference in wearing this product as opposed to my Roc.. I bought the big one the second time so I will use it till it is gone. Not sure I will reorder this product either.

Hate to be so down on this product but it's not at all what I expected. When I saw Cindy Joseph's product line I was excited to try it. I'm 50 and have found I can no longer wear make up like I used to when I was younger. I expected the Glimmer Stick to add a subtle sheen to my skin but it doesn't do that at all. It's basically good for use as a balm for the lips. It's too greasy to be used on the cheeks or brow bone. If you're looking to drop $27 bucks on a lip balm, this product is for you.

I just purchased this about a month ago, and was a little skeptical thinking it would be too flashy. I'm a natural-looking-face fan, so I was afraid this would be too obviously makeup. It is really more of a highlighter than anything, and it is moisturizing for my wrinkly spots near my eyes/upper cheekbones. I also found it is great on the center of my eyelids as a brightener.

I was on the fence when I ordered the Boom trio, the reviews were mixed. I am 58 and always wear makeup a light foundation and lately notice that it really does nothing for me that my skin looks as good without as long as I have a good moisturizer on it. But I feel naked without makeup what a step to take hiding behind it for years! I do need some or I look washed out, so yes to the mascara and blush and lipstick but more of muted shade that is more flattering. Wearing this product my doctor told me I look refreshed so there you have it, if I can fool my doctor wearing this makeup line then it gets my vote! It leaves my skin looking dewey yes you will feel a little sticky from the beeswax, but ladies, didn't you feel that way from all the make up you wore that weighed you down? At least I look refreshed and dewy now and not old and caked on!

I'm a makeup minimalist, have embraced the natural-but-finished look since I went over 40, and I have extremely dry skin. I bought the Boom trio and I love it...have since become a huge fan of Boom makeup and moisturizers. It goes on smooth and relatively sheer...it doesn't sparkle too much and my roseacea prone skin has been fine with it. I use glimmer 85% of the time on my eyelids - it brightens, doesn't bug my sensitive eyes or skin, and it's easy to put on - just roll the tube over my eyes. It's all I use on my eyelids. I've seen some use it on their lips - but I find that too glittery for me. It is Pearlescent - not too shimmery - enough to brighten my eyes. 15% of the time I put some on my upper cheek bones - it gives a, well, glimmer effect. The first time I did this a coworker said &quot;you look glowy today&quot; - and I took that as a compliment. I love this stuff. I am a natural look person, but I could see power-makeup-users adding some glimmer atop their normal routine with this. I have to reapply 2x a day to keep the glowy look, and with my dry skin I love the moisturizing element of this. Yes I wish it cost less, but I bought a second Glimmer for my purse.

Very greasy makeup. Like wearing vaseline on your face. Will not be using or recommending to others?

I've been using the BoomStick Trio for several months now, and to my surprise, my favorite is the champagne-colored highlighter, the Glimmer stick. (I also like the Glo moisturizer stick and the Color multiple, FWIW. I just like the Glimmer the best.) Why am I surprised? For one, it's a cream highlighter, and I was devoted to my liquid Moonstone from BECCA. For two, it's a mauve-y champagne color in the stick, and I feared it would clash with my pale, warm-toned skin. But no: I pat it on my (nearly non-existent) cheekbones, blend gently, and I get a much more effective gleam than even Moonstone. I don't see lines of demarcation or a clash of undertones. My favorite use, though, is as a dot on the eyelid just above the pupil, as Cindy demonstrates in a video on her site. This wakes up the neutral, mostly matte eye makeup I usually do without accentuating any creepiness on my eyelids. The Glimmer also doesn't seem to separate or crease particularly. Very nice. Whether you think this is expensive depends on what you're comparing it to. This is $24 for 8 grams, which is $3/gram. The Stila convertible color is nearly twice as much, at $5.88/gram. The Benefit Watt's Up is $3.2/gram. The Nars Multiple (the original, not the matte) is slightly less, at $2.78/gram. The Burt's Bees Lip Shimmers (which could be used as a highlighters) are $2/gram. So the price seems to me to be in line with similar products. As for the Moonstone? I use it mostly to mix with too-matte liquid foundations or to thin out cream ones.

This review is for the Boomstick Glimmer, not the Glo or the Color (both of which I like). I had high hopes for the Glimmer, but the color just didn't suit me - nor heinous, just not enhancing. It's certainly a neutral, but didn't do anything for my skin. I understand the minimalist concept of these organic products, but another color option wouldn't be a bad thing. I gave the packaging a mediocre rating because the printing on the tube rubs off after a short time. Otherwise, as previously mentioned, the product(s) are shipped in a lovely gift bag with a ribbon tie. A simple detail that is a nice to receive. The customer service from Cindy Joseph/Boom products is really good - they've responded to my email questions and concerns promptly and not with a canned reply, but an honest to goodness conversation.

It's a pitifully small amount of product for an outrageously high price. Too bad, because I do like the color product, but can buy that elsewhere for less. In fact, I've been using my Burt's Bees lipstick in exactly the same manner for years. I just liked the idea that the boomstick has a wider stick and would be easier to use. I paid $68 + $7.95 shipping for three small tubes of product, only one (the color) of which is usable. The clear is very similar to a solid vaseline or chapstick. The frosted stick is fine if you're in your 20's - I am not. Use of that color and frosted look is very aging and looks like you're outdated by wearing something akin to Slicker from the 1970's. The Trio does come in a sheer drawstring bag. To repeat: this is an OUTRAGEOUSLY PRICED product for what you receive. I have no problem paying higher prices for products that work and are worth it. I've been using Erno Laszlo since 1982 but am always interested in trying new products because it's fun! :D I used that skin care because it worked fabulously no matter my age, and skin changes. Even at age 55, my skin looked fabulous. Sadly, they changed the ingredients in so many of their products, so now I'm on the hunt again. I've stopped buying their makeup since they've changed their skincare ingredients. I was so hoping these boomsticks would be a viable make up for me, but sadly, it doesn't work. I realize these sticks are makeup and not skin care, but I can get this product at drugstores for much less money should I decide to. If this were a case of someone being a small, home-based cottage industry creating a quality product, I'd be happy to continue to support the small business, but this is anything but a *small* business. About the packaging: this item could easily and quite safely have been shipped in a bubble envelope for a fraction of the price I paid. If the price were to be reduced to be more in line with the quality and amount of product in the tube, I'd buy the colorstick again in a heartbeat. Until then, I'll continue using my Burt's Bees lipstick as my color.