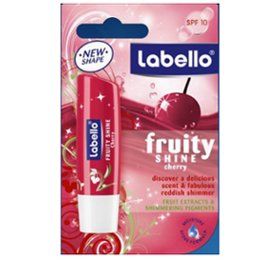 Hidden gem! This works better than Dior Addict Lip Glow on me... my lips look very plump and hydrated with a hint of colour (they’re already somewhat pigmented so your mileage may vary) Nuxe Reve de Miel (for night) and this for day are my HG lip care. They’ve never looked better!

Why did i pay $6 plus $5 shipping online for this ? I thought that this would be silmilar to nivea cherry but its not , its has two of the ingredients in most lip balms that im allergic to . I knew that it would not be good for my lips but i tried it anyway, and within the first 10 minutes of wearing it my lips broke out with zits, and it has a greasy texture, its not light like most of niveas versions . Threw it out , going back to niveas . Nivea and labello are from the same comapny btw.

This is a nice moisturizing lip balm. Also it works as a light gloss for me when I don't want to use a lipstick/gloss I just apply this it gives a nice light cherry color tint to my lips. The best part is I don't have to dip my fingers in it.

Lovely product :) a comfortable lip balm , that doesn't feel waxy or just sits on your lips , it has a lot of natural ingredients and NOT paraffin based ..nice light taste of Cherry and a hint of subtle cherry colour , I took out one lippy because I used another multi-tasking medicated cream with panthenol as a lip treatment , so I am not sure whether it really &quot;heals &quot; chapped lips ..But it certainly locks the moisture in all day in the most natural way with no funny taste .

Labello Cherry is an incredibly moisturizing lip balm with a reddish, pink stain and a nice cherry flavor. On me the color mimics Benetint (liquid form, not pot o' gloss), but since I don't like the Benetint on my lips (gross taste!), and I don't like gloss in a pot, the Labello is a great alternative. I get the same color, but I can apply the Labello without a mirror, and reapply it without worrying about it getting too red. I first used Labello when I lived in Germany, and found it again by accident in 2001. A former colleague of mine used this while he was on the U.S. Ski Team, and apparently liked the Cherry flavor. I saw a tube of it on his desk one day, and since it was hard to find stateside, I asked him where he bought it. He said he ordered it online from some Canadian supplier, but that he didn't like it as much as the old version because his lips seemed really pink when he used it. Apparently he didn't know they had changed the formulation to impart a tint (yikes for him!), but once he realized it he asked me if I wanted to buy the other three he had purchased. I was more than happy to do so, and I've been hooked ever since.