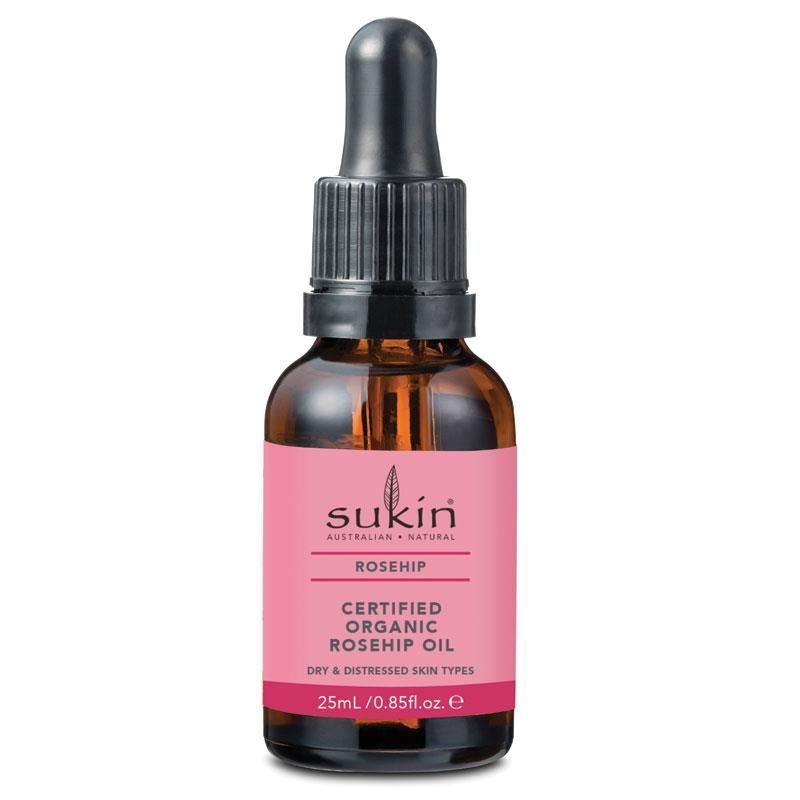 I do love this product, it leaves my skin so lovely and soft and the price (on sale for $15 AUD, 50mL) is killer for how long its lasted me, I'm 1/3 away from finishing it's been like 5 months. I'm definitely quite tolerant of smells; but this product has a strange one that is a tad off putting for me. The bottle also is possible a defect or broken as I can't fully close it; this occured the first time using the product and when I try to close it all the way it bounces back to being nearly closed. One time i tried to force it and the glass dropper part detached from the twister but it was easily reattached. It's actually my first rosehip oil but I'm going to branch out to different brands after I'm finished with this one as the gripes that I have with the product are making me want to find better alternatives but nonetheless it's still a quality product.

I have been using the Sukin rosehip oil for a few years now and this is the product that I keep repurchasing. Prior to using this I had very dry and flaky skin. I found it difficult to apply liquid foundation because it'll always accentuate the dry skin on my cheeks. However, after having used the oil my skin is no longer flaky. I also usually mix a drop of two of the oil with my liquid foundation. This is fragrant free with no strong smell. It absorbs very quickly. I usually get when it's on sale at either Priceline or Chemist Warehouse in Australia.

I love this rosehip oil. I've tried so many over the years and I just can't beat the price and effectiveness. I love that it's organic too. I have super dry, sensitive skin and this really helps me to look glowing. I swear the natural vitamin A has a slight retinoid glow effect on my skin? I need to layer a moisturiser over the top at night to lock in the hydration but I love this and will repurchase.

Best rosehip oil out there. Non greasy and very hydrating. I love using this with my moisturiser.

What I really like about this oil is that 1) it's organic and 2) it doesn't have a very strong earthy scent like other rosehip oils. It works wonderfully on dry/dehydrated skin and you only need 3 drops...I mix this with 3 drops of argan oil and my skin loves it.

I was really scared to try this product. For every dozen glowing reviews about rosehip oil-there would be one that mentioned major breakouts. I am not necessarily prone to breakouts-I don't have acne and I'm not overly oily...but I do tend to get a pimple or two when trying new products or using creams with the wrong ingredients for my skin. But I had already bought this on a whim from the health food store while buying other products so I figured Id take a risk and try it out in small doses. So far Ive been using it under my eyes, on the bridge of my nose which is always dry and red, and patting any extra on my forehead and temples. So far so good. This replaces my need for an eye cream, and helps with the extra dryness I get between my eyes. Keeps skin in these areas which are prone to fine lines moist and plump. I have done my research on rosehip oil and read that it can help everything from dry skin and aging to acne scars and acne. I have also read some useful information-that it expires quickly-within 6 months and should probably be kept in the fridge-which is where I keep mine. Mine also doesn't have a fishy smell as I noticed some others mentioned...so I'm not sure if that's normal? Anyway, I would love to use this on my chiin where I tend to break out, and where theres always some lingering redness from pimples of days gone by...but I feel like its too risky so I'll hold off on that. If I do get the guts to use this all over the face and see further results I will come back and update my review to comment on its effectiveness. I am glad to have this for the upcoming winter because it really does hydrate-and my face tends to get dry and chapped to the point of burning mid winter. So thus far I recommend checking this stuff out if you haven't already-and see if it works for you!

I am among the &quot;wish this worked for me&quot; crowd. It makes my skin glow and keeps it moisturized and makes my under eye area less crinkly. It plumps out my skin like nothing else I've tried. I used it mostly in the evening under bp cream, but occasionally during the day, and makeup applies nicely over it. However, it makes me break out. It really exacerbates my chin and nose. I tried reducing my usage to every other night, but it's just a no go. I have been saving it for days that I need my face to look on point; I was in a wedding this last weekend, and I must say, I looked damn fine. However, right on schedule, my chin has 4 big angry zits. It was super clear before this weekend. As others have said, this smells a little weird, herbal and slightly &quot;fishy&quot;. It's not something I dread or anything, and it fades. The bottle does up tight, and it's pretty sturdy, I've travelled with it. The dropper dispenses easily. I have no complaints about packaging. It was about $20, so affordable enough to do a trial run. I don't regret trying it, and I'll slowly use it up, but I probably won't rebuy due to the breakouts I experienced.

Now that I've used almost a whole bottle of this, I felt like I could give a thorough review of the product. First, when I started using this (after switching from my much adored but $$$ Boscia Tsubaki Oil), I noticed I immediately broke out! My skin is usually clear but this caused several LARGE bumps on my forehead and nose area. I'm not sure if they were pimples per se as, even when I had pimples, they would be small and easily removed, but they felt like hard, big bumps under the skin that eventually got reabsorbed. I stopped applying the oil to my face and instead patted it lightly under and around my eyes to minimize lines while trying to get rid of the bumps. I did notice that the fine lines under my eyes were substantially reduced and they were less puffy, so that's a plus. Eventually I began applying the oil to my face again to see if it was just an initial reaction, and lo and behold, my skin has since improved immensely. As another commenter mentioned, however, when I skipped using it for a few days, the fine lines returned with a vengeance. Still wouldn't call this my HG, and would forewarn that it could cause some initial purging.

I've been using Trilogy Rosehip oil for 2 years, but my local organic skincare store stopped stocking it and replaced it with the Sukin line. I would say it goes on less greasily than the Trilogy, that is to say it sinks in to my skin/absorbs more. I know this as it just doesn't migrate to my hair as much (nightmare in the morning) and my skin isn't tacky after 10 mins. I still don't think I'd use it as a day moisture source, as it does keep one's skin well oiled. I don't use any night creams as anything of any moisture giving potency clogs my pores, so I only use rosehip oil at night sometimes alternating with Paula's choice 2% BHA gel and this keeps my skin plumped and tip top. I would just add that when I stop using RHO for any length of time the fine lines around my eyes very quickly reappear.

I'm only 20 but I'm absolutely terrified of ageing and wrinkles. I try my absolute best to make sure I age nicely, and I heard rosehip oil does a good job of it. I have some acne scarring and weird uneven skin, also. I'm a fan of the Sukin range already so I picked this up. It was on sale for $9, so for oil yeah expensive but I can't comment on the original price as I have no clue what it is. This stuff is great for my dry skin. My skin is flakey but at the same time my pores can get so clogged from products I was scared to use this. At first I got what a lot of people have reported, red bumps on my face. I persevered and kept using and they eventually went away after about a month of use. So, I haven't noticed a difference in how it's keeping away fine lines etc but what I have noticed is my dryness has almost gone whilst using this, my skin tone has evened out completely (besides eye bags but eh) and my acne scarring is less severe, not gone, not even close to gone but has improved. Overall, yes I'd repurchase. Not because of the immediate effects it has on my skin but to keep it replenished and healthy.