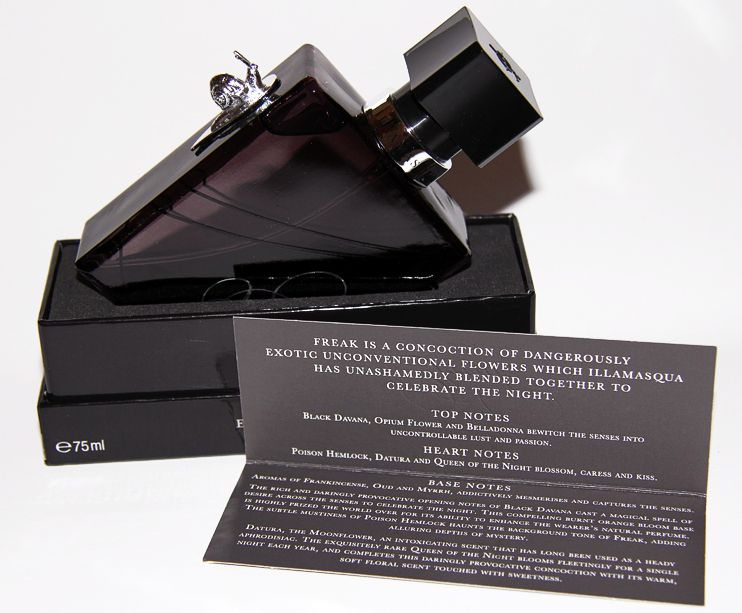 Unique but gorgeous smell. More for evening than day wear (in my personal opinion) as it's a STRONG fragrance. Some people might think it's a little TOO strong and overpowering. It's an unusual scent, maybe more for night time than day time, but hey, personal preference. Who am I to say you can't wear it all day?! I wish I could send smells through the computer, as I really can't describe the smell. You'd need to smell it for yourself. Adjectives would maybe be evocative, mysterious, STRONG! The perfume has good sillage in that it is long lasting, but as I said, it is strong so folk will smell you coming! I haven't repurchased it, but it's rare for me to buy the same perfume over and over again. I tend to change and try other fragrances that I like and I didn't love this perfume enough to repurchase it. Not that it's a bad perfume, by any means. Just as I said, I tend to change.

I bought Freak in the new Christmas exclusive range, it's a 30ml bottle which is really great because it's so much cheaper than the 75ml. The fragrance itself is definitely a heavy scent but floral and feminine at the same time, someone here has described it as 'vintage' and I totally agree, I think that is the perfect description and is probably one of the main reasons I am in love with this perfume. I would purchase this again but most likely as a 30ml as the original is very expensive.

Ok I am terrible at describing fragrances! But this is not exactly what I was expecting but turns out I like this scent. Honestly it strongly reminds me of Leslie Blodgett's "Santa Barbara" but this one is more intense, slightly different. I love heavier scents and this one fits pretty well with me - not something totally unique but it is a "safer" evening scent. It has a "cold" feeling to it, if that makes sense at all. I can wear this one year round actually. It's pricey, and certainly isn't my go-to night out fragrance, Bottle design is amazing! I would buy this again.

This was sprayed on a very ill and reluctant me in Selfridges during a miserable winter. I didn't catch the name of the perfume, just that it was Illamasqua. Surprisingly, it cheered me up immensely, it made me feel like me again, more confident, grounded and was comforting. Fast forward to April, and it was still playing on my mind. I returned to Selfridges, and explained it to the SA. She gave me a sample, and it was everything I remembered it to be - warm, relaxing and not fruity or light. I love it - the last perfume I felt this way about was the original YSL Champagne. It is just right for me. I look forward to buying the full bottle.

i did own "Freak" by Illamasqua. But swapped it. Amazingly cool bottle indeed. But I still much more prefer this "Champaca" by SPACE NK. Both Freak & this scent is made by the same nose: AZZI GLASSER. The scents are very similar, but this one from space nk smells, in my own humble opinion, much better. PLUS it lasts longer. Is more unique. And best of all = is cheaper. If you haven't got the ££-money for Freak. Try this for less. :) PS: i'm not *in any way* trashing FREAK. I just happen to prefer this one, by the same nose, amazingly talented Miss Glasser <3 .

This really does smell a bit freaky. I received a sample when purchasing something from Illamasqua online, and I sort of wish I never did because I like it so much. I love individual, odd, quirky fragrances. I like to smell original and unlike anyone else. It's the sort of fragrance that's so unusual that it keeps you guessing, keeps you wanting more. The sort of thing you smell on somebody in passing and then contemplate for a few seconds whether you should go back and question the person as to what they were wearing. I think it's got a deep sense of seduction about it. Seduction, mystery and allure in the middle of the night are all things come to mind when I smell this. It's so thought provoking. I've never felt so philosophical about a perfume before but this really stands out to me. The staying power is pretty decent, still lingering on my clothes days later. Love the packaging and the marketing of it too. (I adore those purple shades and hues) This is definitely the next perfume I intend purchase.

I like "different" fragrances if they work with my body. This is a weird one, but in a good way. I can't spray too much because then it becomes quite overpowering, but if applied effectively, it lingers throughout the day and has a crisp/clean scent with a hint of something darker/musky. I can't go into the notes at all because Ive never smelled the majority of the ingredients, but I do like this perfume. I use it when Im feeling a bit more daring or if Im bored and need a bit of a wake up call. While I do like Freak, Im not sure I would repurchase unless I could find it somewhere cheaper.

FREAK applies with a crisp tang [maybe there is a hint of mint?] that has a slightly salty, almost coppery, undertone to it. I suspect that the perfumers are trying to mimic blood and I have to say the result, though it sounds iffy, is actually enjoyable. This effect lasts for about ten minutes at most, after which it sweetens up with something that I can't place, but reminds me slightly of coke. The 'coke' leads to the floral heart of FREAK, where it fully develops into something jammy and rum-like, with a splash of burnt orange. I think this is the davana; I've never smelt davana before, but people describe it as fruity and alcoholic. Davana's main use is in higher end perfumes as it enhances the wearer's natural perfume, so the overall impression of FREAK appears to be slightly different each time that I've tried to sit down and write out a review. I'm also not overly familiar with any of the other floral notes so I'm not sure which is which, but everything gradually becomes warm, peppery and reminds me overall of white floral blends like those found in Michael Kors Very Hollywood. After the dramatic opening notes I was surprised by the sweeter warmness in the heart scent notes and was initially disappointed, but quickly came to appreciate that the softer heart does make FREAK more wearable. After a hour or so a faint wisp of smoked woods and musky spices develop, and hides the sweeter jammy notes. The star note in the base of FREAK is rich and earthy, which I believe is the hemlock. The hemlock seems similar to patchouli, but I find patchouli too heavy and cloying, whereas I don't have this problem when wearing FREAK. The hemlock gradually overtakes the floral notes one one, so after a few hours the base notes are all I can detect. Scent notes; Black davana, opium flower (poppy), belladonna, poison hemlock, datura (moonflower), queen of the night blossom (night-blooming cereus), frankincense, oud and myrrh. FREAK was made for evening wear, but I did happily wear it during the day over the colder months, as although it is a noticeable fragrance I don't find it cloying or irritating. But admittedly now that it is lighter and starting to warm up, I stick to using it for special occasions because I find it a 'statement' fragrance and a bit too much for day to day wear.

Familiar with and like most of the notes, loved the concept, so I thought this fragrance was a no-brainer. The smell attracts and repulses me. When spray it, I cannot stop sniffing my wrists! Have trouble picking out individual dark notes, although I do catch whiffs of synthetic, masculine musk-cologne with an unique metallic opening. Within 30 minutes something powdery, fruity/berry, floral sets in. Initially it seems male and female fragrances have been clumsily pushed together making something….well….wearable. Great longevity and silage. The feminine essence comes out on top after dry down; too bad it settles almost generic. End result is not terribly unique, certainly not sophisticated. I do admit reaching for it when I'm in an odd sort of mood. Can only see this as a cold weather scent. Bottle is lovely, even if it takes up a bit of counter real estate. I go back and forth over whether I would have purchased if not for the bottle and fantastic marketing campaign.