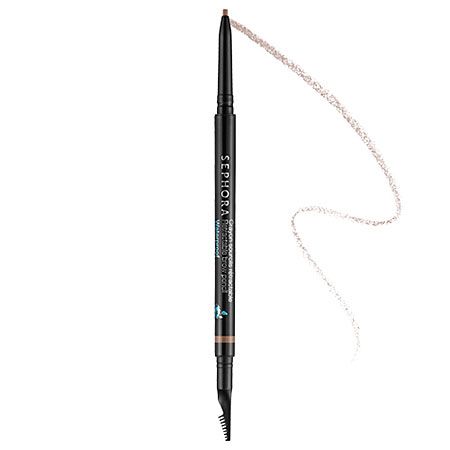 As far as brow pencils go, this is my new favorite in terms of price, color and staying power. I have soft black brows and the shade "Soft Charcoal" is perfect for me as it has no red or orange tones. I was using Brow Whiz before this one which was too red and before that, Dior brow pencil which was too waxy and hard to apply. The Sephora brow pencil is neither too waxy nor too soft but it goes on quite pigmented so I still have to use a very light hand in applying. The color goes on dark brown that leans gray and looks very natural on me. I use it for adding on to the brow tails and filling in sparse areas. The pencil is not as fine/thin as Dior's but it's a bit thinner than the Brow Whiz. Lasts all day on my oily complexion and for the most part, it's water resistant. It does come off easily with soap/water combination though. I would've given it 5 lippies if not for the "brush" at the other end of the pencil which is useless for blending in the product. If they had put a real spoolie there, it would've been a lot more useful but instead I have to grab a separate spoolie for blending. Still, this is a repeat buy for me and for the price, you can't go wrong with it.

The brush part is not usable at all. Very little amount of product. The product itself though is good but not worth the price.

I purchased this pencil because I was trying to save a few bucks instead of the $24 dollars I pay for the Brow Wiz. When I tried the swatch on my hand in the store, it glided on fine, but when I used it at home, it appeared to be too waxy and the product..sheds? if you blend too hard. It took a while to fill in my sparse brows, but other than that, the overall blending is nice once you get a good grip on it.. The shades are not that bad, nothing too red or beige, but I did have to go a bit lighter to get the color I wanted. Other than that, it's a pretty decent pencil, not nearly amazing as Brow Wiz, but it's a nice alternative. Would I repurchase again??? Yes, if I need to pinch pennies for a bit, but other than that, I think I might stick with Brow Wiz for the time being.

SkinVery Oily, Dark, Not Sure

Really good brow pencil. The selection of shades seems to cater to most brows I can imagine. Got the shade Midnight Brown, which works well for me. The comb on the end of the pencil isn't very useful, you would be better off with any kind of spoolie for brushing the brows and blending the product after application. Bought the product the day before leaving for what turned out to be a very hot summer holiday in Norway. Wore this pencil every day and it lasted through sweat, rain and applications of sunscreen. No other brow pencil I have owned has managed this.Only detractor is the unhelpful comb, with a better brush/spoolie on the end this pencil would get 5/5.

I love how skinny this brow pencil is. The brush end is very different than most spoolie ended brow pencils, and somewhat stiffer which can hurt if you use too much pressure. The formula is not as creamy as others but I don’t mind it because it actually looks more natural in my opinion. There is a decent shade choice and some shades are so close I had trouble choosing the best one for me. The good thing about that is that when you need to replace it you won’t be disappointed if some shades are unavailable.

I have this in Neutral Gray Brown and Midnight Brown. Both are great colors. No red tones and the Gray Brown is the most natural looking brow color I've ever tried. It's a cool brown/taupe and I would definitely repurchase for that color alone. The texture is not my favorite. It's a bit hard and takes more work to fill in compared to the Anastasia pencil. These remind me of the Nyx microbrow pencils but with better color options for my needs. I think these seem to disappear faster because more product is needed to achieve a good look than creamer pencils like ABH. I'll continue to buy these but if ABH had a neutral gray brown I would spend the extra money for the smoother quicker application.

The only grey/brown bow on the market. Reasonable price, wears all day through work and gym. really wish thy would make it in pot wax form, but still the best I'v;e found since Lorac discontinued their waxes. Buy them 5 or 6 at a time online (free shipping and don't have to go to the mall), because the color seems to be popular and is often out in my store.

Great pencil! Lasts, not too dry, not too creamy, love the color (midnight brown), looks natural. Just cut off the PATHETIC comb - seriously Sephora, save yourself the 50 cents production and just stop putting it on there. MUCH better than NYX pencil which DOES NOT last on me (and I have dry skin!) and doesn't have great color match for me.

I am on my third of these and am really satisfied. The shade 'nutmeg' is perfect for me, and if you are looking for a pencil that is easy to control (fine retractable tip), good for oily skin, and/or waterproof/sweat proof this is worth a shot. I use it in the pool or in the gym and have not had any issues with it melting away. I gave it 5 lippies but I agree with a review below which states a clear plastic end where the product is would be more helpful, since you don't really see how much product you have left. One day you kind of just remain with a stub! Obviously I would repurchase (as I have been doing).