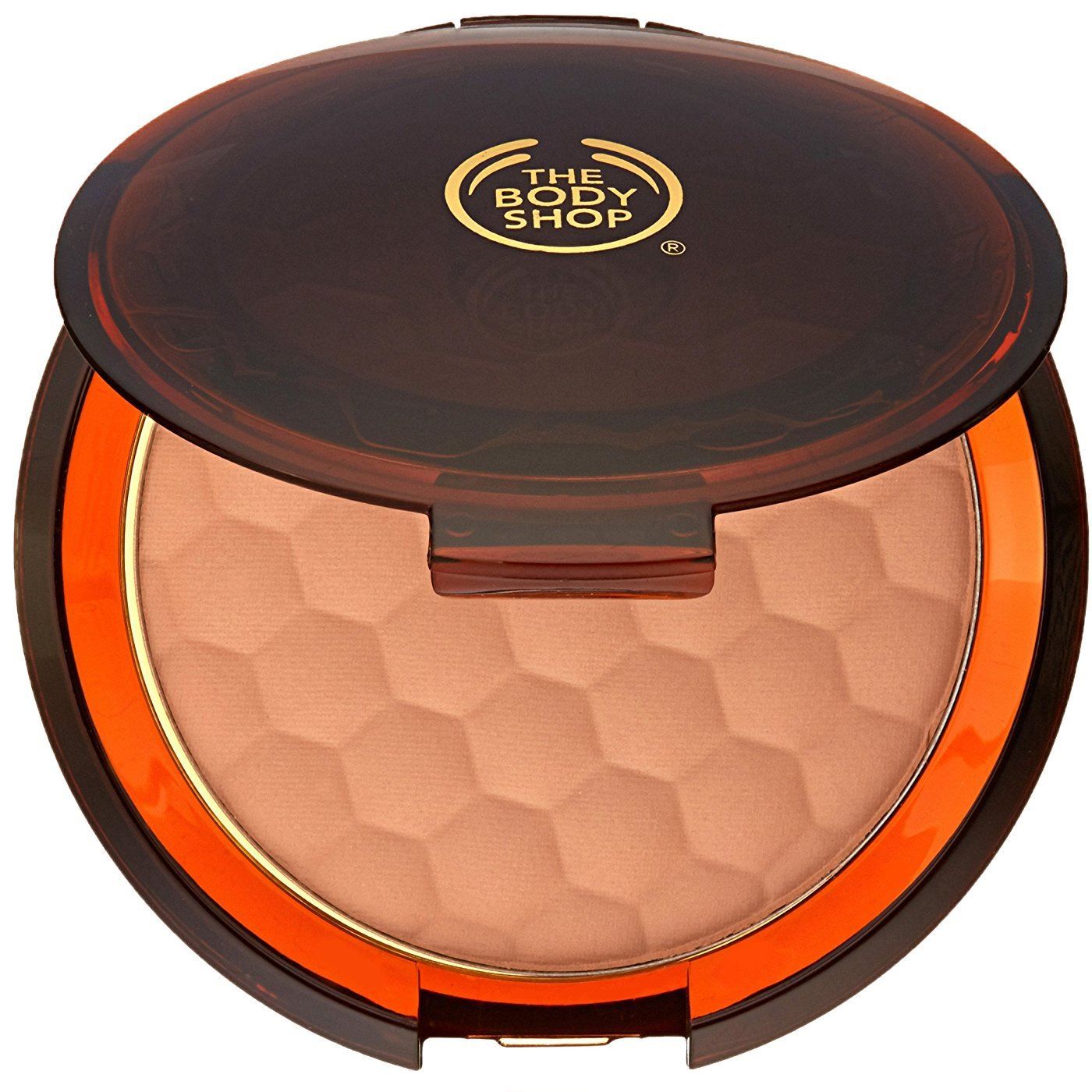 This is by far the best bronzer I have ever used! The product has a beautiful buttery formula that blends like a dream. For me bronzers need to be pigmented enough that you don't have to swirl your brush in lots, but not overly pigmented that it's easy to add too much and get that muddy look, this is the perfect inbetween! The shade I have is 01 and it is AMAZING for pale skin for an everyday bronzer. It makes you just have a natural bronze look to your skin that no on would notice you're wearing bronzer! The shade is range is fantastic I find bronzers usually have around 1-3 shades and this has more than that I can't remember the actual amount but definitely something for everyone. The price is a little pricey for a high street product, but the product is definitely worth it and lasts for ages! I have had mine for seven months now, use it everyday and it still has not near hit pan at all. The scent is so refreshing like mango but not very strong it goes away as soon as you apply it, but it is a treat when you open your bronzer that smells of mango, delicious! Would recommend to anyone!!!

It's cruelty free, but CRIMINALLY GOOD!! I love shade 01 (the lightest) as it's got no shimmer, or orange pigment it's perfect for all over dusting on light/medium complexions and will build to a natural looking colour. Secondly it's the perfect contouring bronzer, light enough for everyday, that won't give you that &quot;gulp, I've got to blend that!&quot; Moment. You can just apply merrily and look great ????

I picked this up in the lightest shade. I have issues with bronzer since I am so fair and am awful at blending so they look bad on me. This one is very light, matte and easy to blend out. It gives me a little colour but nothing over the top. I picked this up on sale but I think the regular price of $22cad is way too high for this. Would probably repurchase if on sale again.

I ordered it for $11 on boxing day but im sure they have sales often. It just came today and i was so happy :D its such a soft pigmented bronzer for the price. I have the shade 03 medium matte and its a tad darker than my milk chocolate soleil (love that bronzer too! But its a softer build-up bronzer, btw im nc20 in mac) its pretty light, so if you are my tone dont get fair matte or light matte though those are good shades for very very pale skin. ive heard the packaging chips off and doesnt look so pretty after a while and thats a shame but not too big of a deal i guess. I def would repurchase and since this was my first buy, i will explore more of the body shop!^.^ edit; i feel like it blends too easily that the colour blended away, so i chose 05, a darker shade and its much better now. its not even that dark so if youre nc20 like me 05 probably works the best. dont let the shade numbers scare you

This was actually my first bronzing powder ever (I'm 19) and I love it. I asked for help in the shop to pick a matching color and I have shade 03 (I am pale skinned). The color is not at all orange and gives you a nice warm glow. I will definitely buy this again. The texture is also great and it applies very lightly - so you can keep adding powder if you want to build up. I usually use this in combination with their all in one face base powder and their vitamin E fixing spray. Gives me a great glowy look. The only thing I disliked about the packaging is that the top lid broke off - but thats because I wasnt very careful with it.

I love The Body Shop, but I'd never gotten around to trying any of their makeup. This bronzer is my first purchase from them. I'm also going to be honest and say that this is my first ever bronzer, so I cannot compare it to anything else. I use it to contour my cheeks and nose and warm my forehead a little. Sometimes I'll use it as a blush. My skintone is on the lighter side of medium. I was in a real rush and had been wanting this bronzer for a while, so I dashed into the shop and thought that the shade 05 (dark golden matte, I believe it's called) would be dark enough for me. I wanted something that would provide a subtle contour for every day looks. I didn't want an overly chiseled look or a 'dirty face covered in mud' look. Thankfully, this bronzer wasn't anything like that. First of all, the packaging is outstanding. I am normally a pragmatic person that cares mostly about the product itself and its performance, but quite honestly the packaging kind of adds to the enjoyment of using this product. The honeycomb design is so pretty, and it comes with a good-sized mirror. It's matte, not shimmery. It provides the 'subtle contour' look I was going for. It's easy to apply and blendable for the most part, does not look patchy and most importantly, it's not too orangey nor too ashy. Now for the cons: the reasons I took off a lippie. First of all, I was a complete idiot and didn't get a shade dark enough for my skin tone. I dithered between shades 5 and 6 and went with 5 (&quot;I'll just layer the product! If it's too dark, after all, I won't be able to use it!&quot;). Don't get me wrong, 5 IS darker than my skintone, and you can easily see it, but 6 would've been better, I believe. Second con: for the life of me, I can't get this stuff to last very long on my face. The only thing that seems to work is piling it on and building it up several times - it seems to last longer that way. But if I use a large powder brush and just apply a little bit on (like in the mornings) it's gone within a few hours. I have a hunch the second problem might be due to the first one. Especially as other reviewers do not seem to have had any problems with lasting power. It's makeup, it's going to fade, but because the shade isn't quite dark enough, it only needs to fade a little for it to completely disappear. I would probably repurchase this sometime in the future after experimenting with other bronzers, just using the darker shade this time. Normally when I dislike the shade in a product I blame it on myself and do not penalize it. However, I find that this is an every day annoyance when I find that, later in the day, all my contouring has disappeared. I may change my mind with the shade. As I said, I wanted a subtle contour, and I got one. People often comment that I've lose tons of weight (when I haven't!). I quite like the trick I'm playing on people at the moment. If I used the darker shade (06) it might become quite obvious I'd contoured with something. Overall, a beautiful product that I am absolutely in love with (especially for the price), and a great first impression from The Body Shop that has made me want to buy their other products. I would most definitely recommend this to anyone with pale or light medium skin. Unfortunately there doesn't seem to be a selection for darker skin tones.

As someone with a very pale complexion, it's really difficult to find Bronzers that give a 'subtle' glow. Instead, Bronzer usually ends up looking like I've smacked some dirt on my face. This bronzer is different. I love how The Body Shop actually accommodate for fairer skin and this bronzer helps sculpt my face without being overbearing. Love it.

Saw a lot of people online recommending this bronzer for people with pale skin so i decided it was time to try it and i do love it. i have the lightest shade. The shade is still a tad warm for my cool toned skin, but it still work fine if i don't apply too much. Nice texture and super blendable, and the packaging is cute.

A nice dependable, solid product that has become a regular in my daily winter/early spring routine. Shimmer/sparkle free. My skin colour is pale but olive. Imagine the colouring of a Mediterranean person that hasn't seen the sun in a few years. That's my winter skin colour. I have this bronzer in the lightest shade- on the reasoning that I could build it up if I wanted more intense colour. It is nice and subtle and warms me up a little. It's not a product that comes off in huge pigmented quantities- but I think this is ideal for a bronzer because far better to have a little than too much right from the first go! Much easier to work with. Such is its subtlety, in the summer I think this shade will be redundant for me as I can't imagine it will show well on a deeper skintone. I've stopped short of giving it the full 5 stars because I don't think it's a show stopper or utterly amazing. But it ticks a lot of boxes.

This is the best bronzer ive ever used ! It is sooo natural and you can control the bronzing effect as you like plus you need a very small amount if you want a light bronzing effect since it has a very good pigmentation. I use it even when my skin is at its worst ( breakouts, acne..) and it doesn't break out ! Its very affordable and will last you so long. I think this is the bronzer that ill stick to forever :) !