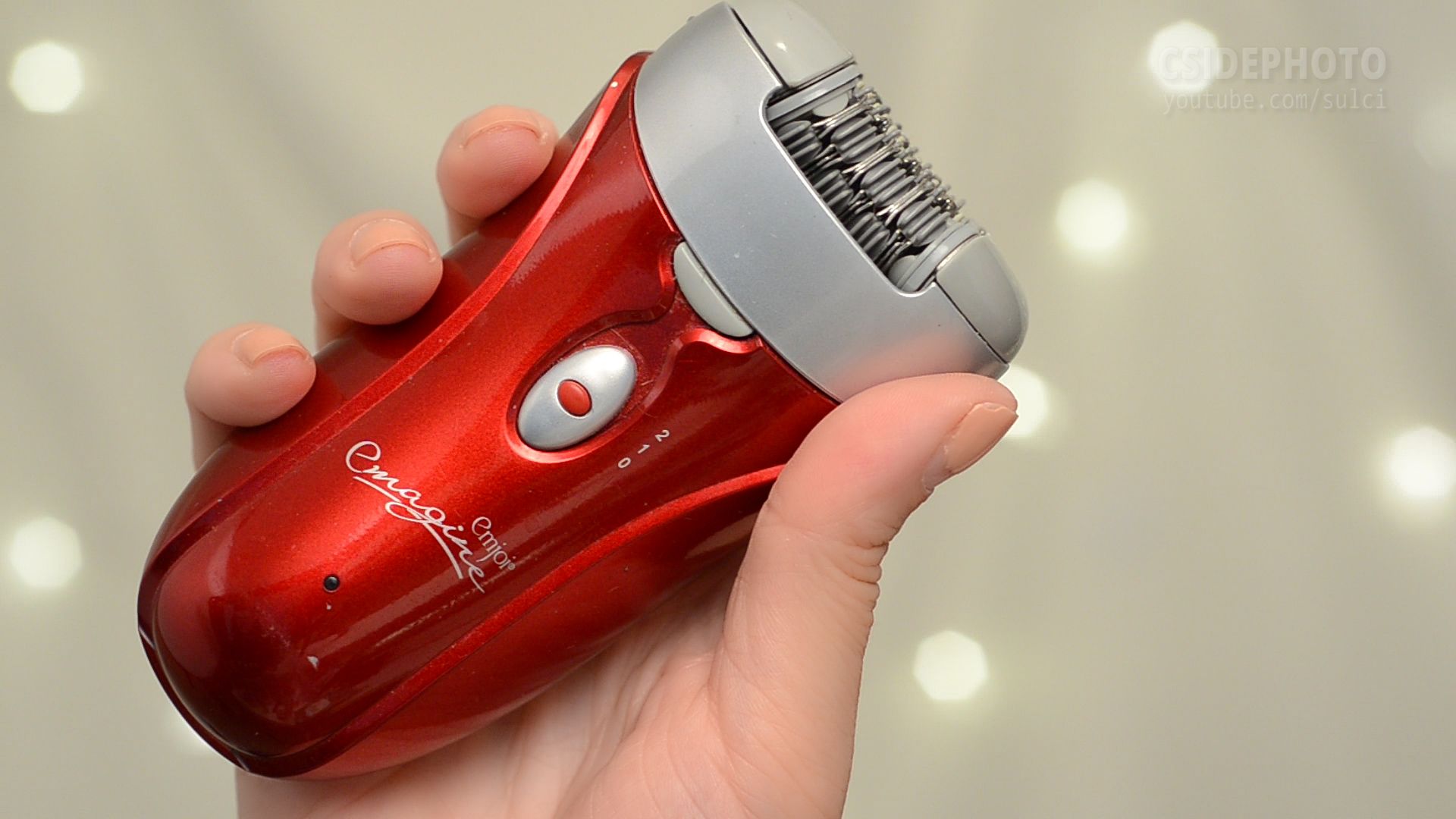 <object onclick="ga('send', {hitType: 'event',eventCategory: 'Ajax Interaction',eventAction: 'PlayVideo',eventLabel: ''});" width="360" height="320"><param name="movie" value="https://www.youtube.com/v/4XyOnxWlAfI"><param name="wmode" value="transparent"><embed src="https://www.youtube.com/v/4XyOnxWlAfI" type="application/x-shockwave-flash" wmode="transparent" width="360" height="320"></object> I love this epilator. I've tried a few other ones when mine broke after many years, but they all sucked so I repurchased this one again. I love that it plugs into the wall vs. batteries. I love that it's easy to clean. I hate that it's pretty painful, especially under the arms, but such is the nature of arm removal :) I do get ingrowns afterwards, so I shave sometimes in between epilating just to help reduce ingrowns. I usually only epilate maybe once or twice a month! I love how convenient it is! I could never go back to just shaving.

Even though the writer below me also liked this gadget,for me this is not a painful device but perhaps she wasn't used to waxing which can also be painful. But since I do wax and have done electrolysis as well, I've developed a high tolerance to pain from hair removal methods. I don't think this device is painful at all. It really is easy and it does a great job of getting rid of hair. You might need to do it as often as you would shaving initially because different hairs are in different cycles of growth so you aren't going to get every hair every time. But this gadget is pretty inexpensive and great at removing hair on arms, legs, bikini line, around the mouth, etc. It does zap a little bit when it grabs a hair and it can leave a little red mark which will fade. But I once tried the Nad's gel hair removal system and talk about pain! And it left huge black bruises that took almost two weeks to go away. Nothing like that for me with the Emjoi Epilator. Costs about $70 on QVC. Considering that wax costs about $12 at Sally Beauty, and the cost of razors, this is a great deal. Plus, most people may not know this but permanent removal of hair on the underarms also helps to reduce underarm odor. So that's another great perk to using this gadget.

It HURTS- but it WORKS! A bit of background. I have never in my life used an epilator. I have only heard about the old school coil versions as an urban legend of the lengths women will go to be hair-free. When I saw the Emjoi Emagine, I was instantly curious. It was not scary looking at all! The women demonstrating did not appear to be in excruciating pain. It was definitely pricey but I figured I would spend that much on razor refills over the summer and this will (hopefully) last for years. The whole concept is a little intimidating. I did plenty of research online so by the time it came in the mail, I'd be ready. It came and I was again surprised at how harmless this supposed torture device looks. I will admit I did put off actually trying it for a week or two. Then two nights ago, under the influence of a glass of wine, I decided to go for it. I do not AT ALL condone drinking before using this, as accidents would be more likely to happen. It just took my nerves away enough to take the plunge. I dove straight into the deep end- my underarms! I used a warm washcloth for 5 minutes to soften everything up and dissolve my deodorant. DO NOT use this with deodorant on or it WILL NOT go smoothly! I am not gonna lie. It hurts. It hurts bad. I have a pretty high pain threshold and my eyes teared up on the first pass. The good news is you get numb to the pain quickly and only the first minute or so of each section is the worst. It took about five minutes to do both and the results were immediate. ALL my hair was gone and ALL by the root! I used a little aloe vera spray (the kind that's good for sunburns with NO alcohol) immediately after. I did have some initial discomfort, similar to razor burn after and some &quot;dotting&quot; but the next morning, I was hair free and smooth. For the underarms alone and not having to touch them up two days later, this is well worth the price tag. UPDATE 6/21/2013: I have since used this on my legs and bikini line and I am still loving the results. After three weeks, there is NO pain and the more I use it, the better it works. I am using about twice weekly to get all the cycles of hair but I think soon I will use even less often. DO NOT be discouraged if the result on your legs is not 100% smooth the first few times. The more you use it, the better it works!! UPDATE 5/2014: So after having and using this for over a year, I can honestly say it has made a world of difference in my hair removal routine. Though I have since given up on using it on my shins/lower legs, I get the best results on my thighs, bikini line and underarms. I found the upkeep on my lower legs to be too much work for me, not to mention how long actually using it takes to get the results I am after. But as someone who has ALWAYS, no matter what I've tried, gotten razor burn and in grown's in my bikini line, this is my savior! I've definitely gotten my money's worth on this one!!

This is ideal for traveling, but I do not recommend this product. It plucked some of the hairs and broke off some of the rest. I feel like I might as well shave. My search for an epilator continues.

I bought the Emjoi Emagine Epilator (red) to replace an old Panasonic I have, that I spent $25 on a few years ago. I thought for sure the Emjoi would be better in every way, but I have gone back to using the Panasonic. Emjoi pros: Powerful and fast because of all the tweezer heads Emjoi cons: Very loud. I can use the Panasonic while watching tv, but I can't hear anything over the Emjoi Does not get short hairs. Emjoi needs at least a 4-5mm to grasp the hair; my panasonic will get them at half that length. That said, I use my epilator every day because I figure that a minute of pain daily is better than 15 minutes of pain monthly. If I did it every couple weeks I would probably use the Emjoi because it's so much faster to use and because it would be able to grasp the longer hairs. I rate it 3/5 because I thought that for the price it would be so much better. But it's not terrible by any means.

This review is for the purple emagine which can charged or plugged into the wall. I love my epilator!!!!!!!! This is the only epilator I have ever purchased but its worth every penny. My friend has the emjoi light caress with the light and she likes it but I tried it and it is slightly more painful than this one. The epilator itself is great, good battery life except it doesn't really indicate when its done charging you kinda have to guess. I wanted something that would last longer than shaving and it definitely does. I can go about a week or being completely smooth and then things start getting a little fuzzy. For me the best way to epilate is to keep up with it and go over the area every few days just to keep it smooth and so that i wont have to deal with complete regrowth. I've used it for my armpits, arms, legs, and bikini area. I would say i love it for my arms and armpits, as for my legs, its a little too time consuming for me so I havent been doing it but I will as soon as summer starts. For legs, I've never achieved a completely smooth feel but no hair is actually visible (you can feel the tinnnny hairs) so thats something to get used to. I have a high pain tolerance so that hasn't been an issue for me but the pain is def something that you get used to until you barely feel it. Bikini is super painful but I prefer it over shaving any day and it stays smooth for a while. This epilator grabs most of the hairs easily but you do have to go over it in certain angles or go in circles to completely remove the hair for a certain area. The only con is that after a while tiny hairs that you can't really see start to slow down the speed if you're not careful about cleaning it each time you use it. But since the head is removable I've found that removing the head &amp; soaking it i alcohol every now and then really helps get the tiny hairs out. Also, I love that the head can be replaced and is sold separately (emjoi website) if you want a diff head for diff areas or need a new one. Overall, I would highly recommend this epilator! At first, it was something that was hard to get used to I'm glad I didn't give up on it.

This is my second epilator. My first was the Remington Smooth and Silky. I bought the Emjoi Emagine off Amazon.com since it was pretty pricey. $120US. It was on sale for $75.. and free shipping. I tested this out underarms and i have to say, compared to the RSS, this didn't hurt as much!! I find that it does take a *bit* longer than the RSS but results are smoother after. I love that it has the silver ion technology since you can't wash the epilator to clean it. I haven't tried it on my arms or legs yet, but will update when i do. So far, I really like it. The shape fits comfortably in my hands as well. One thing i would have liked would be a &quot;flash light&quot; that some of the other models in this line has.

Removable cord, unfortunately not battery operated. The noise is somewhat dulled compared to other epilators I've used. Very thorough. Great for a quick tweeze of arm and leg hair. Purchased it on sale.