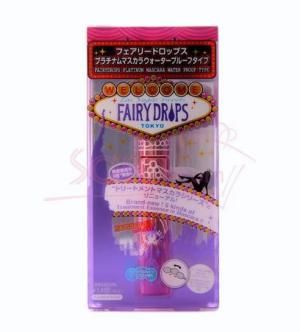 Let me get straight to the point Pros: Lengthens like crazy Cute packaging Easy to remove Doesnt clump lashes Cons: Doesnt volumize much So infernally expensive Holds curl only when you curl your lashes PROPERLY

This is a good Mascara. It stays on really well so you wouldn't need even waterproof. For me it isn't my most reached for Mascara but I do like it and would be interested in trying a different FairyDrops mascara if they do come out with one.

I am a die hard Majorlica mascara fan, have been using it for many years and tried many of their different mascaras and while I favour some over others, I do love them all, they don't smudge, holds curls and gives my pitiful asian lashes some much needed definition. They were my HG of mascaras until I found Fairy drops. For those who are blessed with long thick curly eyelashes, you would not understand how jealous I am just to have something remotely like yours. So mascara has been important to me, very very important. What I look for, is not just volume, not just length and not just curl, I need all 3. Mascaras with fibres is old news, I have been using those for years and while they do something, they just define, I want drama!!!! (for someone who has short, sparse, pitiful eyelashes, my drama is probably to a lot of ladies - normal lashes hah) Since I already have 2938474545432 tubes of mascara, whats the harm to have another 1 more? After reading heaps of rave reviews, I bought the Fairy Drop Platinum Film Type mascara (whatever Film type means, I still have no idea). Anyway.... First coat I. WAS. IN. LOVE. Holy moley it was incredible, It was ridiculously long and thick. yes its not false lashes, but then again false lashes has a lot of lashes, I have sparse lashes for the mascara to build on but boy, it was instant oomph, like push up bra for lashes. I don't like spider look so I use my trusty MJ for second coat, it separate the lashes (not that it clumps in the first place anyway, i just want a second coat of something), and my eyelashes have never looked so awesome before. Then I was like, oh what the heck lets put another coat of Fairy Drops on and see what happen. Yeehaw! it was like magic. My lashes are long and curly and thick. I don't even know what happened anymore I was so darn excited. My husband was like oh wow beautiful eyelashes. (yes coming from a guy while munching on his bacon sandwich) And I was smitten... by the mascara... I have not banish my MJ, because I still have sh1t loads of it to go through and admittedly I do also like them still (downgraded from love ohhh...) But, Fairy drops is my ultimate now. I hope it doesn't go gluggy in the tube too soon. Yes go and buy it :) no need to convince yourself anymore. hah!

I tried Fairydrops mascara in a small tube that came with a bunch of small size mascaras that I purchased from Sephora last Christmas. I finally got around to trying this little mascara in the red and white tube. The brush looks kind of funky...it looks like it's made of 3 little balls. I was skeptical if this would be easy to apply. I was really happy with it when I tried it on. It is easy to apply, and made my short thick lashes look long and separated - with just 1 coat! It's a huge time saver not having to apply multiple layers of mascara to get the look you want. It doesn't smudge and lasts until I take it off. I am going to purchase this in a full size tube! EDIT: I purchased a full size tube and have been using it regularly. Instead of drying out it gets sticky and gummy - not a pretty sight. Will not repurchase again.

NC25, Chinese short/sparse lashes. Red/white packaging. The previous reviewer had it spot on, so I will only add.... With my short lashes, the wand makes it hard for me to get to the roots w/out hitting my lash line and smearing black mascara on myself.

This is for the waterproof one. First of all, really pretty pink packaging! It is a nice enough mascara, but nothing special either. The colour is quite light which I don't really like, but it might be nice for those who want a natural effect. It lengthens only slightly and does not volumize much either. I find the curling power is very poor though, which was a killer for me. It might hold better on non asian lashes or lashes which are thicker and more naturally curly. It removes pretty easily too for a waterproof mascara. Might be nice for some people, but for me it is a bit too boring and can't hold the curl.

Fairydrops Platinum- the film type, aka non-waterproof- is basically my HG mascara. Looks amazing in one coat, outperforms all the low and high end ones I've tried. In two coats it's the closest to false lashes a false lash mascara has ever come on me. No issues with it whatsoever and it's a breeze to remove. Perfection in super adorable packaging. The only downside is that I have to get it from Hong Kong and it costs about as much as MAC's most expensive mascara- but it's about ten times better, so I don't mind that much.

This is the review for the non-water proof, sold in Japan version. Not sure whether it is exactly the same as the Scandal Queen sold in US. First of all, just to let you know I have very oily lids. Before my encounter with this mascara, I had been using water proof mascara. My problem was so bad that even water proof mascara would smudge on me (yes, even the department store brands, such as Lancome), leaving me with panda eyes that were incredibly hard to fix by lunch time, because it was waterproof.... Other than Kiss Me Mascara, I had to use Clarins Double Fix Mascara on top of waterproof mascara to seal it off! Ridiculous! It is all fine, other than time consuing in the morning, and pain in the butt to remove at night. All the rubbing, and soaking eyelashes with makeup remover... I was giving myself wrinkles. Then I switched to tube/ fibre mascara in hope to fix my panda eye issue. While they are great for lengthing, most of them are quite bad in volumnising. But this one is nearly everything I want from a mascara. It lengthens, it adds volumn, and it gives my droppy eye lashes nice curl without resorting to eyelash curler. All I need to do is to tilt my head backward a bit while apply it, after 2-3 coats, they are curled automatically. I don't even know how it manages it. Best of all, it can be removed with warm water, so good-bye all that nausty night removal routine. The only fault that I can pick out is it does have tendency to flake a little. Buy it is easy to clean up with a cotton tip or just finger tip, unlike the smugdes created by waterproof mascara, which truely refuse to budge. What can I complain about it?