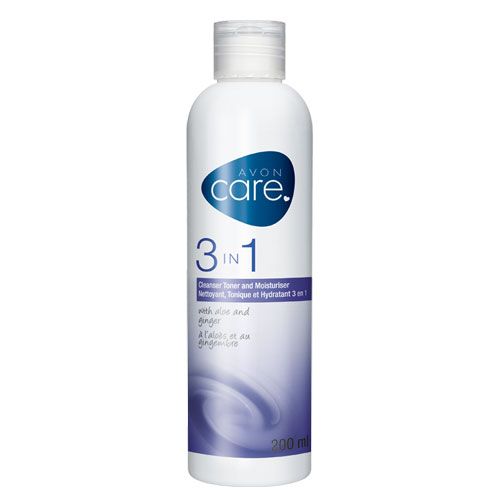 My tube says this is called &quot;Avon Care 3 in 1 Cleansing Lotion with Aloe and Ginger,&quot; and the packaging is similar that the one pictured, just smaller and in a squeeze tube. Like many multi-use products, this is one that fails to deliver. Firstly, Avon made the mistake of putting sodium lauryl sulfate in it, so it is way too drying; there is no way this cleanser is going to &quot;moisturise&quot; anything! If I had known SLS was in this, I never would have bought it, even though it's fourth on the ingredient list. I notice some people have compared this to Cetaphil. Like Cetaphil, this does have a lotion-like consistency which barely produces any lather, but it's there that the comparison ends. This cleanser contains SLS, ginger and fragrance, so it's hardly going to be hypoallergenic or suitable for sensitive skin, (but at least the ginger is last on the ingredient list.) I don't know if this is any good at removing makeup, as with two young children I don't often have time to wear any these days. This isn't a bad cleanser, there's just no reason to bother with this one when they are so many better ones out there, both from Avon's own offerings, and elsewhere. It is reasonably priced and well-packaged, but that's not reason enough to buy it again.

I do like this cleanser, it has a very light consistency so it doesn't irritate my acne-pron skin whatsoever which is a huge plus BUT it doesn't remove heavy makeup at all. Pros: very affordable; good for sensitive,acne-prone and combination skin; almost no scent; leaves skin smooth; So-so: Avon is kind of hard to access in place where I live, that's why probably won't repurchase Cons: too thin to remove makeup

I purchased this based on the other MUA reviews and was not disappointed. Basically, this is a very thin, lotion style cleanser that does not lather. It's kind of similar to Cetaphil. Personally, I can't stand cleansers that lather. They irritate my skin and dry me out. However, the directions do say this will lather. So, if that's a selling point for you, you'll definately be disappointed. As for its cleaning ability, I've been using this in the morning, and it's done a good job. I use cold cream or a heavier cleansing cream at night, so I can't really can't comment first hand on its makeup removing abilities. However, my guess would be NOT GOOD! This stuff is really thin, and I can't see it cutting through layers of makeup. Overall, this is a good cleanser for morning use or nights when you aren't wearing any makeup.

I have to agree with the reviewer Shereenmohsen It's a great , gentle and washable cleanser for combination/normal skin ...But it doesn't replace Dove Beauty Bar which I loved and used all my life ...I use other make-up removers that don't need washing but I prefer a cleanser with water after it sometimes or just to clean my face , this one is ideal ..and not expensive at all ..It 's not drying as well , nor greasy on the face . Still loving it and it's going to be a staple in my skin care routine :)

This cleanser is great on my 53 yr old skin! I was skeptical at first but it works better than Mary kay's and is cheaper! I have sensitive oily skin and this works wonders!

very good gentle cleanser that did not dry out my skin it cleanse , refresh &amp; moisturize skin in one step the reason I gave it 4 stars is that my new Dove bar does the same with less price

I bought this for $3 from an Avon lady that used to sell at my former job. Its a clear, thin gel, and does not foam. Doesn't really have a scent, nor does it irritate my skin. It removes makeup quite well and my skin feels very soft and smooth after using it.

This cleanser is kind of strange, but I do really love it. After reading the instructions, I expected it to lather; it does not. I'm ok with that, though, I don't really have a need for lather. I have used it two different ways. I first used it by wetting my face and hands and then applying it and rinsing. Then I tried putting it on my face dry and then rinsing. I like it both ways. It removes my makeup well, leaves my skin feeling soft and smooth and not stripped at all. It smells very nice, but is not too strongly fragranced. The price is very reasonable. Edited to add: as my skin got dryer in the winter, I experienced stinging with this. My skin definitely gets more sensitive in winter. I put it away for a while.

Maybe this isn't for my skin type. But this dries my skin out.

I love this new Avon cleanser...it is soft and doesn't strip your skin. I use it in the bathtub to remove all my makeup and the grime of the day. Love it ...have already ordered two extra tubes so I won't run out.