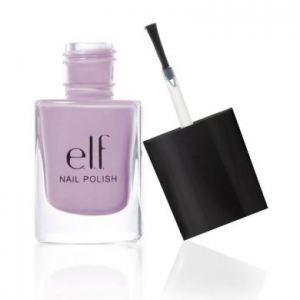 the new formula is pretty awesome. compared to the old i definitely say it's worth the hike up(from $1 to 2). it dries faster, goes on smoother and has a smooth consistency which leaves no streaks. 2 thin coats was enough for me. i'm not too fond of the color so i'm not sure how quickly i'll use it up, however i will be repurchasing other polishes in different shades.

as of december 2011, the formula for e.l.f. polishes has been redone, so it may be better to disregard reviews from earlier years (especially any that comment on a $1 price tag; the reformulation came with a price increase to $2). that said! i wouldn't call this particular color lilac (or at least, it's not the light grey-purple i've come to associate with lilac); it leans to a red-purple more than blue, coming out as a creme very similar to mauve. it took about 2 coats (one regular, one light) to achieve full opacity. like a lot of elf polishes i own, i'll take it off with remover to paint something new long before it actually starts to chip and peel. i'm not terribly interested in the color itself--not so big on mauve!--so i wouldn't repurchase, but i'll still use the bottle until it's gone.

I'm obsessed with finding the perfect shade of lilac, so I own a LOT of different brands/shades. I think this is a pretty lilac, but there's a bit more gray than I would expect in a lilac color, so I would consider this color more of an Autumn color than a pastel-y Spring one. It's rather watery so it took 4 coats to get total opacity. I was pleasantly surprised how well it looked against my olive skin tone, but even with seche vite base & top coat, this polish started flaking/disintegrating after 1.5 days. It's a pretty color for a great price, so I can't complain too much. I'd definitely buy it again, but don't expect too much.

What a gorgeous shade for Spring! Took a bit to dry but the shine in so intense! I thought my nails were still wet but when I touched them they were dry :) Will definitely re-purchase this polish again in different shades! My new fave :)

I love this color. I'm a n00b at painting my nails but found this polish, from the 2011 Summer Set, easy to work with. Two coats had it opaque and it wasn't streaky. It's a nice lilac grey that is gorg for summer. It showed tip wear after three days (but I didn't wrap the tips) and it peeled after six days (but Seche Vite does that to me). It's my favorite over several higher end polishes. The one odd thing is the cap is a bit awkward and it does tend to dry slow, even with a quick dry top coat. I do recommend it and I would buy it again.

I have an nc43 south asian skin tone and some pastel nail colours just don't look right but I really wanted a nice light lilac colour on my nails. Luckily the ELF one is perfect! Its not too light as its a slightly mauvey lilac which is why it goes well with my colouring. It needs 2 coats though which doesn't really matter since ELF nail polishes are only £1.50.