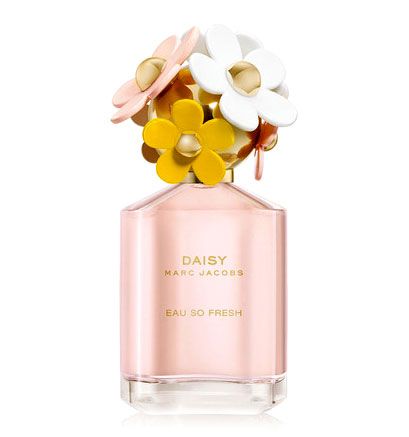 This is a great spring/summer fragrance, although I guess you could use it any time of year. I have used it in the fall as well. I first smelled it on my friend about a year ago. She smelled so good! Lol. I asked her what the fragrance was, and she told me Marc Jacobs Eau So Fresh. I asked my husband for a bottle for a birthday gift. I must say that it smells good on me, too. Ha, ha. It’s also the one cologne I use that doesn’t irritate my eyes if I use it behind my ears or on my neck. I have other fragrances that I can apply only on my wrists and or behind my knees because my eyes water if I use it near my face. That’s another plus. It’s a very light, flowery and airy scent that is never overpowering.

This is my favorite perfume of the moment. I just went out and repurchased the largest bottle of this last night, because I need this in my life. I first sniffed and bought this last spring, after testing all the different Daisy perfumes, this one was hands down ME. It immediately reminded me of a scent from my childhood that I couldn't really place, but it was a scent that invokes feelings of happiness and comfort, while making you say &quot;mmmmm&quot; at the same time. I love fruity florals, and this is the ultimate fruity floral for me. It smells like the word &quot;pretty&quot; to me. It makes me think of summer time and fields of flowers and berries and sunshine. I think my nose picks out the violet note the most, along with raspberry, rose, and plum. But mainly it's a vague yumminess, a juiciness, a clean freshness with a hint of sweetness...by the end of the day I smell a slight muskiness and woodiness. Everyone compliments me on this perfume, and it's always the same compliment. They say &quot;MMM you smell good&quot; then ask what it's called (and I cringe when I tell them because I hate saying &quot;eau so fresh&quot;) and then they tell me they like it because it's nice and light and not overpowering. So...I feel this is perfect as a daytime work appropriate perfume, if you're worried about offending anyone who's sensitive to scents. Perfect if you yourself are fussy about perfumes and are turned off by sharp, strong notes. Perfect if you like people to sniff you and tell you that you smell nice. Probably a safe bet if you were looking to buy perfume as a gift for someone. Also I'd like to mention, since I browsed the reviews for this before first purchase, and was nervous because I noticed a lot of people complaining about lack of staying power...I too will sometimes stop smelling this on myself after a few hours ( unless I'm working up a sweat or put my nose to my skin) but other people walking behind me will smell it and comment on it long after that. So perhaps this is one of those scents your nose just &quot;gets used to&quot; and stops smelling after awhile. But it's never disappeared entirely from my skin, and I can still smell it on my clothes the next day. Bottom line...love this. Yum

Gorgeous body lotion. I assume the perfume is just as nice. Smells feminine and classy and I love the cute packaging. You can't beat the scent of marc Jacobs, they've literally got a scent for every girlie out there.

This is one of my absolute favorite perfumes I have ever owned. It smells like a garden of fresh flowers. It's young, fresh, and very feminine. It actually smells EXACTLY like the Sakura bath bomb from LUSH. I feel incredibly flirty when I wear this perfume. It's clean and light, so perfect for everyday wear. This is one of my signature scents! Very pricey, but worth it!

Toted as a greener, fresher take on Daisy, I'd say for the most part that is true. Unfortunately, somewhere during the transformation Daisy Eau So Fresh dropped everything that gave Daisy its character (what little that it has), and somehow turned out even more boring that its original. Daisy had much more emphasis on its juicy medley of fresh fruits. In fact, my favorite aspect of Daisy was the delicious true-to-life apple accord my nose picked up on (it's actually a mix of various summer fruit notes, although together they smelled exactly like apples to me), and that is completely missing from Eau So Fresh. All you're left with is a generic, yet pleasant springtime perfume, only suitable as an appropriate gift for anybody in all its safe and boring glory. Also, the lasting time is abysmal: on my skin, two hours and the scent is gone from existence. No thanks.

Got this for Christmas and absolutely love the scent, HOWEVER it does not last on the skin at all!! To combat this I got the purse spray which is so handy but it would just be far better financially if Marc Jacobs made this a longer lasting fragrance!

I absolutely love this fragrance. I don't wear perfume every day, but like to put some on when I go out on the weekend, and this is my favourite by far. I used to have the rollerball, but found that the scent wouldn't show up on me no matter how much I swiped it. Then I purchased the spray pen version, and it works perfectly. It's such a fresh scent, with delicate florals and it is sweet without being overpowering. It works as both an everyday and nighttime perfume. My boyfriend notices whenever I wear it and always tells me that I smell good. The only downside is that the scent doesn't last too long - only a little bit of the scent lingers after around 2-3 hours. It doesn't bother me too much, as the spray pen is portable and I can re-apply if needed. Would definitely recommend, especially if you are new to perfumes - this would be a great one to start with!

VERY VERY VERY disappointed in this perfume. I first smelled it from a magazine ad insert. Swiped my wrist on the paper, one night, while reading in bed. I woke up the next morning still smelling it on my wrist and LOVED LOVED LOVED smell!! My hubby bought me bottle, from Macy's, for my birthday and it does smell wonderful, BUT ONLY FOR ABOUT TEN MINUTES!! THEN THE SMELL IS GONE!!! $98 is WAY TOO MUCH to pay for a body spray! Marc Jacobs needs to re-market this, and lower the price, as a body spray or improve the scent to last at least a full day. All the other perfumes I use lasts for days on my clothing.Would love to buy again but won't waste my money.????

I work in the healthcare industry and have been discouraged to wear strong perfumes at work as certain scents can be offensive to patients or exacerbate their allergies. Initially I was going to purchase daisy dream EDT b/c I had gotten a sample from sephora and liked the smell and longevity. I smelled eau so fresh in the store and thought it was more fresh and a little less floral, which I liked, but the two smelled very similar and eau so fresh is a lot cheaper because you get more volume for your money. I ended up buying eau so fresh from amazon because it was cheaper than daisy dream and b/c amazon was selling this for $40 less than the mall or sephora although i was a little nervous about the authenticity from amazon despite numerous reviews stating they felt the product was authentic. The packaging was indeed impeccable--sealed in plastic, nice thick box with embossed flowers, heavy glass bottle with very authentic look and feel. I immediately tested this out and was extremely disappointed that the scent seemed to disappear on me within minutes. I became worried that the product was a fake, but I inspected the bottle and box and read multiple amazon reviews that claimed the product was authentic. Also, the product was sold by amazon through prime and not a 3rd party vendor, so I felt more confident that it was not fake. I then did more research online on sephora's website and makeupalley, and many reviewers complained that the scent did not last very long (minutes to hours at most). In doing more research, i learned eau so fresh was marketed towards a younger clientele, so that explained the light scent and large volume. I realized that this product was more like a body spray than an EDT or EDP. Since I bought the very large bottle (&gt;4 oz), I decided I would try to experiment with using about 3x as much of the spray to see if it would concentrate the scent. Initially, after spraying 3x as much product, the scent seemed to fade away immediately, which was very disappointing. However, throughout the morning I could smell more and more of this perfume and realized that the perfume oils were warming up with my body heat and releasing their fragrance. However, the scent is still very subtle and requires someone to be very close to you (hugging, standing shoulder to shoulder) to really smell it. I enjoy smelling this perfume on myself throughout the day, which is nice, but the scent does not radiate like my other EDP's (Chanel coco mademoiselle, flower bomb). However, this effect actually makes the product more appropriate for my work setting. Daisy dream EDT was definitely stronger than eau so fresh, so if you are looking for a stronger sent that lasts longer, I recommend buying daisy dream (although it is still not as strong as my EDP's). I will likely not repurchase eau so fresh when I run out (which will hopefully be soon since I'm using 3x as much so it's more like a 1.7 oz bottle than a &gt;4 oz bottle) and will buy daisy dream EDT next. Still, if you use 3x as much of eau so fresh as you would normally, you can get decent scent and staying power. The scent also develops the longer you wear it, so be patient if you feel like the initial scent dissipates too quickly on you. The initial crisp fresh scent goes away within minutes but the scent that lingers is more floral and powdery fresh, which I don't mind.