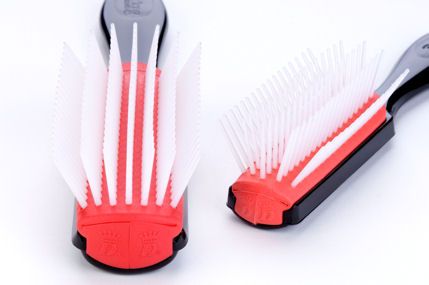 I have long thick hair that is very tangle-prone. Ever since I was little my hair has been extremely prone to tangles and looking messy. I will give my hair a long thorough brushing, but a few hours later find knots and tangles that I either missed or somehow were created in the little time since. It's very annoying. I have had the Mason Pearson mixed nylon/boar bristle brush for about eight years, but more recently I began to realize that it probably wasn't managing my thick, tangly hair as effectively as another brush might. This is because the bristles are quite short, so running the brush through thick hair will only run through the top layer. I would brush from underneath, too, but this still wouldn't quite get to everything, and I wasn't going to start separating my hair into a dozen sections twice a day just to brush it. After looking at reviews I picked up the Denman 9-row Classic Styling Brush with nylon bristles. It looks the same as the brush in the photo here on MUA. The bristles are long and stiff, so it looked like just the thing to effectively brush thick hair. I've been quite happy with the brush so far, especially for the price. Brushing from the top, the bristles easily reach all the way through to my scalp. They're inflexible enough that they can't move around or over my tangles when I hit one, and the stiffness also gives my scalp a nice scratch/massage which I think is good for it. I'm looking forward to brushing my hair again because it feels good, and it brushes thoroughly for less time and effort. I still use the Mason Pearson in the morning after using the Denman, just to smooth out the look. At night I just use the Denman. So the brush is very effective for what I purchased it to do. I'm also a sucker for packaging, and the Denman Stylish Brush is pretty cool-looking. It has a classic, charmingly retro design. It feels pretty sturdy too, but I'll update my review if that turns out not to be the case. I left one lippie off for the con I've found, which is that the brush does not catch hair particularly well when it comes out during brushing. The hair comes off into in the brush for the most part, but it stays in the brush very loosely. The hair sticks all out the sides and fall out of the brush easily. In comparison, other brushes I've owned will hang onto the hair I shed during brushing more securely, so I don't have to worry as much about getting hair everywhere. To be clear, I obviously pull the hair out of the brush regularly, but I find with this one I have to do it more often. For this reason I don't think I'd recommend this brush to someone who plans to bring it around with them a lot, like in your purse or car, because you'd really want to remove the hair after every use.

I got the Denman D6 BeBop massage brush (a small circular shaped rubber plastic brush with a handle on the top you can put your hand thru if u want to) it’s great for curly hair &amp; applying product I got it in my November 2017 surely Curly subscription box. It feels so good on the scalp it’s an amazing brush the only brush I really like I own. Perf for curly hair !! I don’t know how much this costs (surely Curly is $37/month) but this little guy was my fave thing in my box this month !!) super awesome!!! #winning

I've had this brush for about 3 weeks. I bought it because my old Aveda paddle brush has lost its cushion so that the central bristles are facing in odd directions. Anyway, I was attracted to the Denman due to the long history of the brand and the fact that you can take the brush apart to clean it. I have very long (approximately waist-length), somewhat thick, mostly straight hair with a slight body wave. My hair is strong and healthy and I don't have any significant problems with it. My hair care routine is pretty simple: no sulfates, avoid silicones when I can, air-dry most days, no heat styling. I only brush my hair before I wash it or if I need to work dry shampoo through it. This brush is sturdy and attractive and does what it's supposed to. It does not glide through tangles as easily as my Aveda brush did, so I have to work out tangles before brushing. I also wish the bristles were not made of plastic since it leaves my hair full of static, but it's not a huge deal. I use a round brush for blowdrying, so I can't comment on whether this brush would work for that. I suspect the rubber pad would make it difficult to use. This strikes me more as a simple grooming brush. I love being able to take the brush apart for a good cleaning. It's a bit of a struggle to get the rubber pad back in place, but perhaps it'll get easier over time. I've read that wetting it can help it glide into place, so I'll give that a try. I also like being able to customize the number of rows of bristles. This feature is probably most useful for people with super thick, textured hair. The price is reasonable, in my opinion. It was around $12 at Sally's, but you might be able to find it slightly cheaper elsewhere. Love the fact that it's still made in the UK instead of being outsourced to a developing country just to trim labor costs. I'll update if there are any problems., but overall, I'm pretty happy with it.

I really do like this brush. It works very well for running thru my afro before using a blow dryer (with comb attachment) to straighten/dry. It gets rid of all shed hair and tangles so I ca move my blow dryer thru quickly. There is a knock off version by Beautique that is at Sally's. I have that as well.

This isn't a bad brush and while I like it when I blow dry my hair, I think it's a bit overpriced. There are other brushes that are similar to the Denman for less money. The bristles are hard so be gentle when brushing, especially on the scalp. I didn't notice a big difference with styling apart from my hair being a bit more smoother and less static cling. (I think this also depends on the styling products used) Maybe this brush would be ideal if I had really curly hair and wanted to blow dry it straight but it doesn't do all that much with my fairly straight hair. I might check out the Aveda paddle brush and just use the Denman one for regular brushing.

I don't understand how people can use thus brush to detangle curly hair. I don't think this brush is made for that. I wanted this brush since I saw it on YouTube, but I was confused because I only saw one review using it as a styling brush and many others using it to detangle. I bought it, and this gives me the best curl definition ever seen!! Now I only use it for styling, to detangle I use Ouchless by Goody. 3a - 3b curls

This is a sturdy brush which isn't very forgiving for hair. It's good for blowdrying, but that's about it. I find it pulls my hair out far more than any other brush. I would not buy this again as I've lost too much hair using it. I would say this might be ideal for men though, I imagine it works on short hair which doesn't tangle.

After discovering the Denman hairbrush range (through hairdressing) i will never use any other brand of hairbrush! love the whole range of denman brushes, each perfect to create a certain style or look. there is a huge variety of Denman Brushes and once you know the appropriate times to use each one - fantastic! A hairbrush for every style you're wanting to create. Definitely worth paying a little extra for a fantastic long lasting hair brush which you can rely on to do its job. loveee love loveee x

I have never written a review for hair...well...hair ANYTHING here before, but I just had to share my feelings and user experience on this, as it is a HG for me ( and I don't have many of those at all). I ADORE THIS BRUSH!!! No, seriously, I really do. My dad used to use these on my fine, blonde hair when I was little, and for years I missed the massaging action of the bristles and how easily it glided through my very tangle-prone hair. So I recently purchased my own at Sally's for $10. So worth it. Oh, it is so good. Detangles like a dream, even when my hair is a rats nest after washing with my shampoo bar ( I don't usually use condition since I made the switch to Shampoo Bars), and that is seriously saying something. One word of caution though ( and a main reason I wrote this review): BE CAREFUL USING THIS TO COMB THROUGH OILS. It does a fabulous job of this, of course, but..... THE OILS WILL CAUSE THE RUBBER PAD TO BREAK DOWN FAR MORE QUICKLY THAN NORMAL. My rubber pad became sticky, which is the first sign of breakdown ( ever stretch a rubber band that has become sticky?? Yah, not good) so just be wary. All in all, this doesn't affect my rating, as this is just the most awesome brush of this type ever and since the oil thing should be a given, as the base is real rubber and real rubber breaks down in the presence of oils. ENJOY!!! :D

I used to buy those hard plastic vent brushes that are so ubiquitous but they were so hard to clean with the ball tips holding onto the lint, I'd just toss them out. This brush is so easy to clean, and it doesn't scratch my scalp even though it has no ball tips on the bristles. It'll last forever.