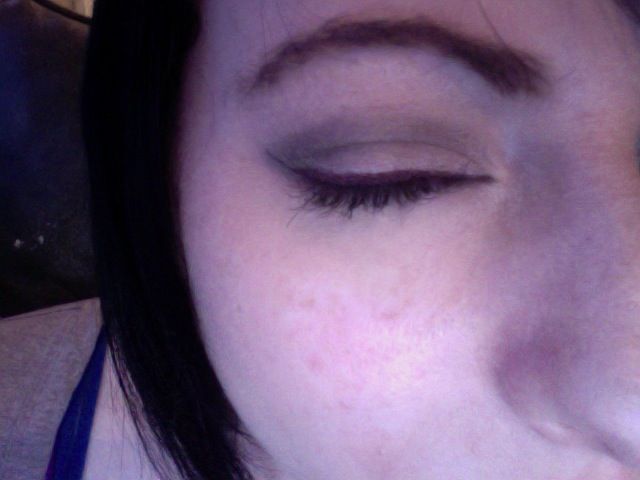 I got this last year from the Style Seeker Collection and since then I have been obsessed. I have a lot of pencil, liquid, cake, gel eye liners and this is the one that gets the most use and abuse haha! This is always my go-to when I am in doubt. It goes with ANY makeup look. I am halfway down my pot. It is a deep dark purple color and it is so pigmented though not entirely opaque. It is so creamy and very long lasting, easy to apply with my MAC 210 brush. It does not smudge, crease, transfer, or flake. I usually wear my makeup 12-14 hours a day. I am so impressed. Will repurchase when relaunched. YOU NEED THIS!

I have many many MAC fluid lines. Several are my HG liners such as Blacktrack, Avenue, Waveline - however this did not become one of them. The color was just not as distinctive on my eyes as I would have liked - my eyes are a hazel/brown and I hoped there would be more dark purple hue to it when it just didn't. It came across as a dirty brown on me. I still use it occasionally but more when I want a dark brownish look. Avenue is my favorite brown, though, and it was a limited edition that I picked up two of when I got it and realized how great it was! I do hate how so many MAC products are limited editions and the only chance you have of getting a product you love again is if they re-promote. Anyway, had higher hopes for this - won't be chasing this one down again.

This is a nice eyeliner which looks great on my hazel eyes, it really brings out the green but isn't too crazy to wear in the daytime. It's pigmented and goes on smoothly. I rated it a 4 because it's not an OMG love product but I don't have any issues with it except that it's kind of a small amount for how much it costs. Hope this helps :)

As a rickety old weirdo slash goth I've been wearing supermassive eyeliner since before half of these reviewers were born- lol - scary; I really can't think of a brand or format I haven't tried. That being said, I've somehow managed to avoid MAC fluidliners up til recently, mainly because I've had just about enough of spending $$$ on products that virtually desiccate in the bottle before your eyes. By now I can use a formula once and tell you how long before it ends up as a dry black lump. Handled with care, and because it is denser and less laden with volatiles and alcohol than many others, I can tell that this formula has a decent lifespan, so I am confident on that account. Great tip- use a little boiled water to refresh your cakey/drying mascaras and liners. They're still going to die on you, but you'll get another month out of them. The pigmentation is 8/10- there is a slight translucence, but I find this useful when you want a more modest effect; many other liners are completely opaque and don't allow you to develop shading and nuancing. So to me this is a plus. The colour itself is eyecatching without being eyef*cking; you don't feel like a 15 year old UD glitter victim. It is a smoky dark stained merlot and I don't see much sparkle in the finish at all. I have large green eyes with gold and ochre speckles and while it is complimentary, it is not super-contrasty and thus not a LOOK AT MY EYES type of situation. More of a 'consider my beauty holistically' effect ;-) But I'm someone who has worn inch wide UV red liner to the supermarket so perhaps my terms of reference are quite erm... broad. If you've only ever worn black liner this may still be a bit of a shock to the system. The wear is among the best I've experienced, and I don't say that lightly, because I have oily lids and wrinkles and I am a chronic eye-toucher. But it comes off easily just with your usual cleanser. The only product I've used that would better it wear-wise is an old Dior liquid liner I forget the name of now- I use to put that on at noon and it would still be solid 24 hours of partying later. This one comes close. There is no grit, no wandering greasiness, it gives you a little time to work it if you want smudge and I get around 2 hours on the waterline, which is fine- there's very little that will actually stay put there unless you want something resembling industrial floorpolish crusting up your eyeballs. So overall this liner gets both thumbs up; there are no downsides or major issues and it is a solid investment.

They finally have this colour back in stores! I wanted to buy it last year but waited too long and then it was gone. I have hazel eyes that are more on the brown side than green, and I wear Dipdown fluidline almost daily. This colour is a really nice alternative to brown and I feel it brings a little more life to my eyes since I typically wear taupy eyeshadows. The colour isn't as opaque as some of the other fluidlines, but after a few extra strokes it's great! I'm glad I finally got a chance to purchase this!

Beautiful dark burgundy with somewhat undetectable shimmer that disappears once applied. It's the most perfect eyeliner color for green eyed galls like me! I have never gotten so many complements on my eye color in my life! It makes them look neon! unfortunately it's limited edition :( but I stocked up on three extras!!!

I'm a fluidline junkie and this is one of the better colors they've come out with. It's a warm burgandy brown with no shimmer. Just like most fluidlines, it's so soft &amp; creamy and applies with no tugging and stays put all day. I never wore black until recently when I purchased Blacktrack, I've always been a brown eyeliner girl so this is the perfect addition to my fluidline collection. I wear this alone when I'm having a naked eye day or with browns or purples. This color is more fun than black or brown but it's not like a crazy jump out at you vivid purple. I have many fluidlines so using this all up would take some time but I would gladly buy another.

I really like this color and I'm a big fan of the fluidlines. They are creamy, easy to apply and last all day long without budging. My only peeve with this is that it is not quite as pigmented as other fluidlines I've tried. it is still very pigmented but not as much as I was expecting. Overall i really do like this product.

This product is amazing. I use it daily and it doesn't smudge afterwards and it stays on all day long, no re-application needed! The only flaw is that it can dry out in the container and then it's useless. Hasn't happened to me, but mine seems like it's well on its way. But I suppose that's okay since I've had it for over a year. It also does a number on my angle brush, when it dries up. I apply make-up in the car, so I use baby wipes to wipe it off each time. It's necessary. Otherwise, you'll go through many angle brushes - trust me, I have learned the hard way.

This is my new favorite liner, I use black to line the top and this for bottom, I apply it with the thicker ELF angled brush and you can hardly tell it's purple, it just makes your eyes pop.