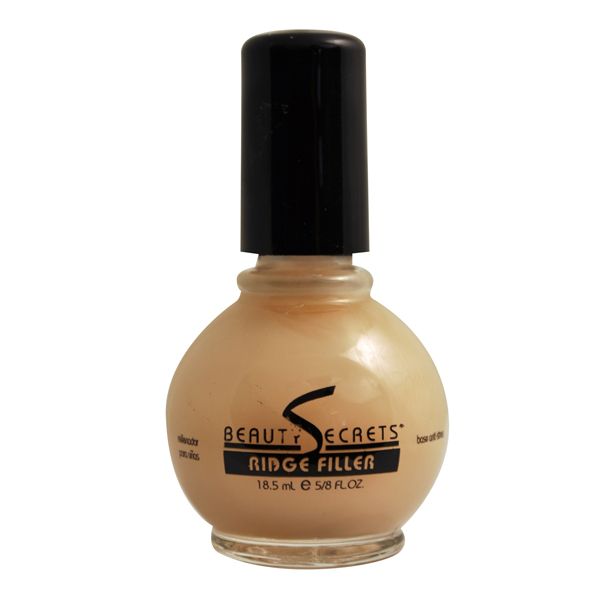 First ridge filler that actually works. It's by Beauty Secrets. The brush is the standard thin brush and the polish is opaque but it does NOT leave streaks, which most polishes do. It also dries quick and clear! Leaves my nails looking smooth and the color goes on smoother and dries quicker. It's not a miracle worker you do have to work on your nails a bit and buff all the ridges and indents in your nails. I give myself a full manicure for the best results. I don't do it every time I use the ridge filler cuz who has time for that! It also helps with reducing nail polish chipping.

This product worked great for me at first, but it quickly became goopy and bubbled my polish after a few uses. The bottle is cute, though.

This is a cheap, semi-opaque base coat I use often. I got a 2.5 oz bottle (= to five regular bottles) for only $4.99 at Sally's. It does the job and dries pretty quickly. Doesn't seem to prolong my manicures but I change my polish often so it's not really an issue for me.

The Beauty Secrets Ridge Filler goes on pretty well, but that's the only pro. It does not dry. No, not "it dries slowly," but it DOES NOT dry. Hours after the last coat of polish has gone on, you can bump the nail and the entire thing will smudge off. I've given it the old college try, but this is something I actually regret buying.

I purchased this product hoping that it would compare to OPI's Ridge Filler. I was wrong. I do not recommend this product at all. It goes on smoothy but that is it's only pro. Within a few hours it starts chipping off. I don't just mean chipping off at the tips of your nails. Whole chunks of nail polish come off, every layer all in one piece. It is an awful ridge filler/base coat and is a waste of money. You are much better off buying the OPI Ridge Filler even though it is more expense, but it is worth it.

I liked this ridge filler. It went on smoothly and easily. The polish brush is your standard narrow brush but no strays, which is unusual for a polish this cheap. (paid $1.99 on sale at Sally's) Big bonus, dried really fast between coats. I hate draggy nail polishes and I hate polishes that take 30 minutes to dry between coats. Incidentally, so does the hubby, since our bathroom is en-suite and that's where I do my nails. The faster, the better...gives him less time to bitch about fumes and vapors and whatnot. It makes a good base for my colored polishes but I also discovered that it makes for a pretty excellent mannequin hands look (if you're into that - I am). I have light-medium skin and this color matches my skintone pretty well. Mannequin hands look good when you have (ahem) aging hands like me! I don't mean the ghastly "corpse hands" look that some pale polishes can give you (Zoya Pandora, I'm lookin' at YOU...freshly dead...bleeaahhh). This just smooths down the ridges and makes for a polished, albeit slightly matte, finished look. I put on SH No-Chip Top Coat over the top if I want it to be really shiny. The matte look is more of a natural buffed nail appearance than true matte. It doesn't so much fill in my ridges as round them out a it, but I have fairly severe vertical ridges in my nails...always have. The ony thing that truly fills in those suckers is acrylics. And I went down that road. *shudder*. Even with a good nail tech and good product, my nails were pissed off, weak, and flaky for six months after I had them (properly) removed. Never again!!! Wear time is above average for my horrendously-abused hands. After two days of on-off-on-off gloves in wet snow, along with scrabbling at bindings, dealing with helmets and snowboards and little girls' mussed-up hair, along with general Mom stuff, I only had two chips. Yet, because of the flesh-toned nature of the polish, the chips were all but unnoticeable. The bottle is round and short and easy to tip if you are clumsy like me. The smell is fairly strong but not as horrendous as, say, Seche Vite. This stuff is formaldehyde and toluene free as well. It's silk-enriched, although I'm not sure it has any beneficial effects as the silk is essentially suspended (and probably dissolved) in the lacquer, but I'm sure there aren't any deleterious effects from the silk either. I haven't noticed my nails in any better or worse shape since I started using this about a week ago. All in all, a nice, inexpensive base coat or mannequin hands look essential. Not quite HG, but close. I would give it a 4.75.

I like this ridge filler but idk why it does not fill in ONE ridge that I have...it bothers me so much but maybe thats just me :/ It is great as a base coat though because the polish lasts wayyyyy longer with it since it is kinda rubberized so it really sticks to it. I guess I need to do a little more light buffing then this will be perfect because it is really affordable. And I'm never getting stupid acrylics anymore, my nails always get weak and full of ridges when I do. More than likely, I will buy it again unless I find a better one. Sorry for the bad review I really want to give it another lip, but that would be a little dishonest..:(

I bought this ridge filling base coat about a week ago and have used it several times. It's really great! It says it has silk fibers in it and I believe it, I used it on my grandmother's nails that had the biggest ridges I've ever seen on a woman. And the results AFTER a light buffing and application of two light coats was fantastic! I used it on my own nails and was very impressed with how well it wears. I was lucky and got the last one they had! Definitely will buy again. EDITED: I think it chips more then say CG Strong Adhesion, but what I do now is use the Strong Adhesion first then use this on nails that have wraps to prevent tears from becoming breaks. It works great this way.

I have been on a base coat kick lately, and the reason I got this one was because I wanted an opaque(ish) base coat for light/nude polishes. This is the first one I am trying out for that purpose because I've been pleased with other products from this brand, and because it's very economical ($2.99). On trying it I found that it's not opaque enough for my needs, but it's an excellent base coat. It applies very smoothly and dries quickly. My polish applied SO much better over this than other base coats I have tried. I mean I didn't realize my other b/c's were even slightly sticky and causing the brush to drag until I used this. It also makes my polish wear a lot better than other b/c's; normally after 48 hours I'd have extremely noticeable tip wear, but right now it's just the faintest trace of that. I'm really very impressed with this, and would definitely buy it again.