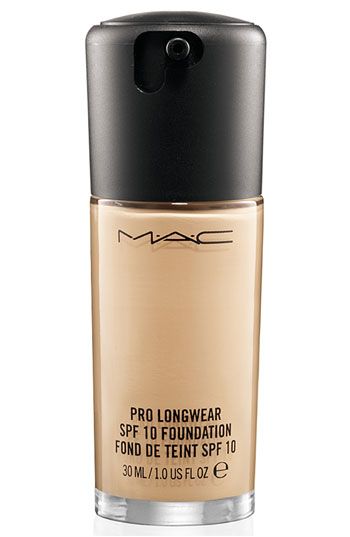 I received this as a sample and DANG it is thick! It looks ok on first glance but I really dislike it as a foundation. It’s hard to spread- easier with a beauty blender. A little goes a long way, so it’s value for money, at least, but the finish rapidly goes downhill. It looks very obvious on my face and sinks into pores even with primer - I’ve tried a couple of different primers now. It also very obviously sits on the skin- it’s not a natural looking finish at all, and personally I hate looking caked in obvious foundation. Huge pass from me.

My current favourite foundation! A little goes a long way with this stuff, and it stays on great throughout the day.

This foundation is bullet proof - so longwearing and it has great oil control. You'll need an oil cleanser or something strong to take this off at night. It also has a pump bottle, which is great. My two complaints with this foundation are the price and the shade range (I wish they went a bit lighter than nw13!).

I have this in NC35 and it's genuinely gorgeous. It looks like your skin but better - but make sure you moisturise properly and use a primer. The coverage is medium. One thing which you should know is that it oxidises, so get one/two shades lighter. But it looks like SKIN. And it stays put. I literally tried this on in the MAC store, and the makeup artist put this on my face without a primer, a moisturiser, a setting spray or a powder. And I went about with my day, I sweated, I got dehydrated, I ran, and it still looked amazing even without additional products. If you apply this with a moisturizer/ Fix +, it gives off the most glowing, gorgeous skin I've ever seen in a foundation. This is genuinely a holy grail product for me.

It separates and looks patchy. Definitely wouldn't buy this again for the price. I'm gonna stay with my Revlon Colorstay for sure.

I am obsessed with this foundation! It has really good coverage (I would argue it's full coverage) and the finish is stunning. It's not completely matte, it has a little bit of dewiness to it! It also wear for a very long time! Check out my full video review: https://youtu.be/4xN4Bh5IxLM

I hate that this product doesn’t come with a pump. Why should We have to buy a pump? Am I missing something? But anyways, i feel like this is medium coverage which is ok.. but the amount I have to apply to cover my hyper pigmentation is ridiculous. Shame, because you actually do get a lot of product in this bottle. Works better with a brush. It also separates after a few hours (mostly t zone) no matter what I use with it so I can’t say it lasts that long.

Ive bought this foundation twice. The first time I loved it! I have a light skin tone but do prefer to look more tanned so I bought the NC30 after being matched up instore. It’s a very warm yellow colour which I really liked. After buying it again a few years later I don’t reach for it anymore! This is a very matte foundation and I have dry skin so it shows all my texture , pores and looks so drying!! I haven’t used this in a while since! It feels like I am literally putting paint on my face! Maybe this would be better for someone with oily skin? The price is £27 which is a fair price to say it’s a high end brand however I definitely wouldn’t buy again!

I was given this foundation by a girl at the MAC counter as she advised me that the Studio Fix I had been using was designed for oily skin (I have Normal/Sensitive skin) and that this would be a bit better as Pro Longwear is designed for Normal/Dry skin. Since then though I have heard the opposite. It reminds me a lot of EL Double Wear, but I feel this is better. It is not as heavy as the DW nor as drying. It also looks better on the skin. HOWEVER, I do find this foundation quite drying on my skin, and it is VERY matte. I was a bit confused after the first couple of uses because I couldn't figure out why it was so drying when its supposed to be for dry skin. The Studio Fix still dries my skin a little, but not as much as this this. Personally, I am also not a fan of super matte foundations, as it tends to really flatten and dull my skin, and takes the natural glow out of it. I feel this foundation is definitely more suited to Oily skin rather than Normal/Dry skin. Coverage is quite good, a tad less maybe than Studio Fix. Also, just as with Studio Fix, you need to work fast with this foundation as it dries quickly. This also definitely lasts longer than the Studio Fix also, and is definitely less transferable. In Studio Fix I am NC42, however in Pro Longwear I am NC44. The NC42 in Pro Longwear is lighter, and more yellow than the NC42 in Studio Fix. Since they do not carry NC43.5 in Australia(which sucks) NC44 is the closest shade to my skin. I would advise possibly going up a shade. I am not sure yet whether this definitely causes breakouts, but I have noticed that every time I use it, the two days after all of a sudden I get angry pimples out of the blue. If I also use this foundation when I have breakouts, it does tend to make them worse. However I know this isn't the case for everyone but just thought it was worth a mention. I really wish MAC would bring out a new liquid medium/full coverage foundation that has a satin finish instead of matte. The market is riddled with matte foundations everywhere, it would be nice to find something satin and less stark. For a make up company as renowned as they are, they sure do bring out some wishy washy products, particularly foundations. Apart from their shade selection, I don't feel like their makeup is all that much better than drugstore foundations in terms of lasting power. It really sucks, because like a lot of other users of MAC, due to my skin tone MAC generally the best I can get to the correct shade, drugstore foundations are not an option for me at all since they're all too red or pink. Just wish their formulas were a bit better.

I have been a die hard Double Wear girl for at least 15 years I’ve tried others but always go back to DW in ivory beige. That was until I tried Mac Pro longwear foundation in NW 22.....I was given this as freebie from a friend and when I looked at the bottle I thought it would be too dark I was pleasantly surprised. This foundation glides on beautifully gives great coverage and is buildable the colour settles perfectly on my skin and I don’t feel like I have a heavy foundation on. It lasts all day and doesn’t need touched up but when I have it’s gone on great and there is none of that dirty look that sometimes happens when you try to apply over the top of your DW. I apply with a brush and add a little of the Mac strobe cream under it to my cheeks to give me a bit of lift. The other day I thought I’d put on my DW as a change and it felt so thick and un natural on my face. The Mac doesn’t sit in lines or cake which I noticed the DW did do when I used it the other day. I came across this foundation by chance but I definitely think at 42 this very slightly lighter consistency foundation is better for my very slightly aging skin. It’s cheaper than DW too which is an added bonus.