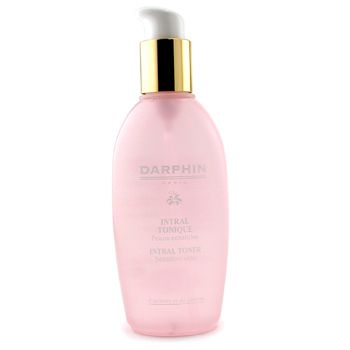 I have been using this toner for nearly two years and am quite pleased with it. Note: in France, at least, the packaging has changed, it's not a pump anymore. The toner is mild and gently removes any traces of cleanser (also Darphin) left on my skin and leaves it well prepped for a serum or moisturizer. It might not work well for someone who wears heavy makeup, but if you wear only light to moderate amounts of makeup and you don't like harsh or strong products, this is worth considering. The scent is pleasant and light.

I bought both the Intral Cleansing Milk and the Intral Toner, and though I am not particularly impressed by the cleansing milk, the toner is just terrible! It left my skin red blotchy and irritated. My skin is not even very sensitive (I use Biologique Recherche P50 as an exfoliating toner every other night and my face can handle it very well) but this toner is quite drying and leaves my face full of redness. Nothing soothing about it. I wonder how it is marketed for reducing redness... The Clarins Camomile Toner is cheaper and way better (smells a bit like Camomile though).

I really like this toner, I don't have super sensitive skin, but still it has its sensitivities and I like to pamper it. I bought this toner because I got it on sale and it doesn't have alcohol in it. What can I say? I like it! No stinging at all, it gets at the dirt, I like how it doesn't dry out at all and the scent is light and pleasant. It's on my request list for friends when they go to France (always have to have a list ready because it seems like people inevitably tell you they're going at the last minute). Unless I find something better, it's a keeper

I saw some recommendation on the Intral line for sensitive skin and decided to try the Intral Complex and Intral Smoothing Cream. I got couple 50ml travel size bottle of the Toner and Intral Cleansing Milk after splurging at Darphin. The toner is my least favorite of all and the only item I don't like. I have sensitive skin and obvious broken veins under my nose and cheek. I have noticed that over year the the broken veins around my cheek increases, and it made me nervous as my doctor told me it can only get worst over years. I even often get small reactive small bump around my nose and mouth during change of season and simple when I feel ill. As thus I started my quest on searching the HG product to reduce my redness and clam my sensitive skin. I started the Intral line slowly by switching one item one by one. I feel fine with other product, but the toner is the one thing that give me trouble with. I found it doesn't fit me after I used the toner for couple time and didn't feel anything particular or helpful. Once I felt my skin is very sensitive and about to the reactive to something. I used the toner to do a toner mask. I thought since the Intral toner is suppose to calm the skin, it should help me with my reactive skin. However, my skin get even redder and tingle a bit after I did it, I soon know the toner isn't that good for me. The Intral Complex and cream did help me to get less reactive during season change which I am grateful about. But as for the toner I would say no no no. I don't know how the product in the same line can act so differently. I am just glad I didn't buy the toner myself.

Pointless. I have eczema. On my face. It flares up when I eat poorly and I have found several products (LUSH Dream Cream being one) that help me during these...unfortunate times. This, regrettably, is not one of those products. Darphin is one of those fancy French lines that you can get in SpaceNK and other luxury beauty stores so, of course, I expected some results. Let's just say it was not cheap. This is the toner in the Intral line that claims to reduce redness and soothe skin. The toner is a light pinkish color and smells slightly of expensive flowers, although not like chamomile, which is supposedly in the toner. It stings a bit and does nothing to reduce redness or soothe irritated skin. I was using it in the morning after washing my face with water and it really made zero difference in my skin. I used up over half the bottle before just giving up on it. After giving it up, my skin had no changes in it. Well, there you go. Useless and worthless. Save your dough and just buy some rosewater or Avene Thermal Water (highly recommended) instead. Much nicer prices and much better results.

I actually didn't use this. My mom did. He has pretty bad rosacea on her cheeks and nothing ever works. But, we went to the beauty boutique in shoppers drugmart and this lady started talking to her, showing her this product. She put some on a cotton ball and gently patted my moms face with it. At first, nothing happened, but within the next 30 seconds almost ALL of the redness on her cheek went away, LITERALLY! My mom was sooo happy and now she uses it every night. Her skin had never looked better!! I would totally recommend this for people with rosacea!!

Lovely toner. Smells beautiful (although that's probably not a good thing). Did what it said on the tin which is increasingly difficult to find nowadays

I was looking for a calming skincare product and was recommended this line. I did not like the serum too much as it did nothing for my skin, but this toner is really nice. I really like the smell of it (same as the serum) and its very gentle on my skin. i found it very soothing, relaxing, and hydrating.

I guess I'm one of the very few who have had a bad experience with this toner. I love the cleanser but this toner is my personal hell. It stings, burns, increases my redness and I literally can't keep it on my face. Other than the cleanser, the Intral line doesn't do much for my sensitive skin let alone curing redness, but this toner is the worst of all worlds.

I love this cleaner and toner. I used it for a while and it makes my skin look wonderfull. Healthy, glowing and no irritation or spots. Because my skin looked so good, I thought that I could swift to a cheaper cleanser. It was okay for a few weeks, but then my skin lookes less good. I never imagined that something simple as a cleanser and toner would do anything spectacular to the skin. I always thought: it just cleans. So I buy cheap cleaners and invest in good creams. But I have to say that I was wrong. This product really does something for your skin. Now I only use the cleansing milk and toner from Darphin. It cleans very well and it smells very good too!