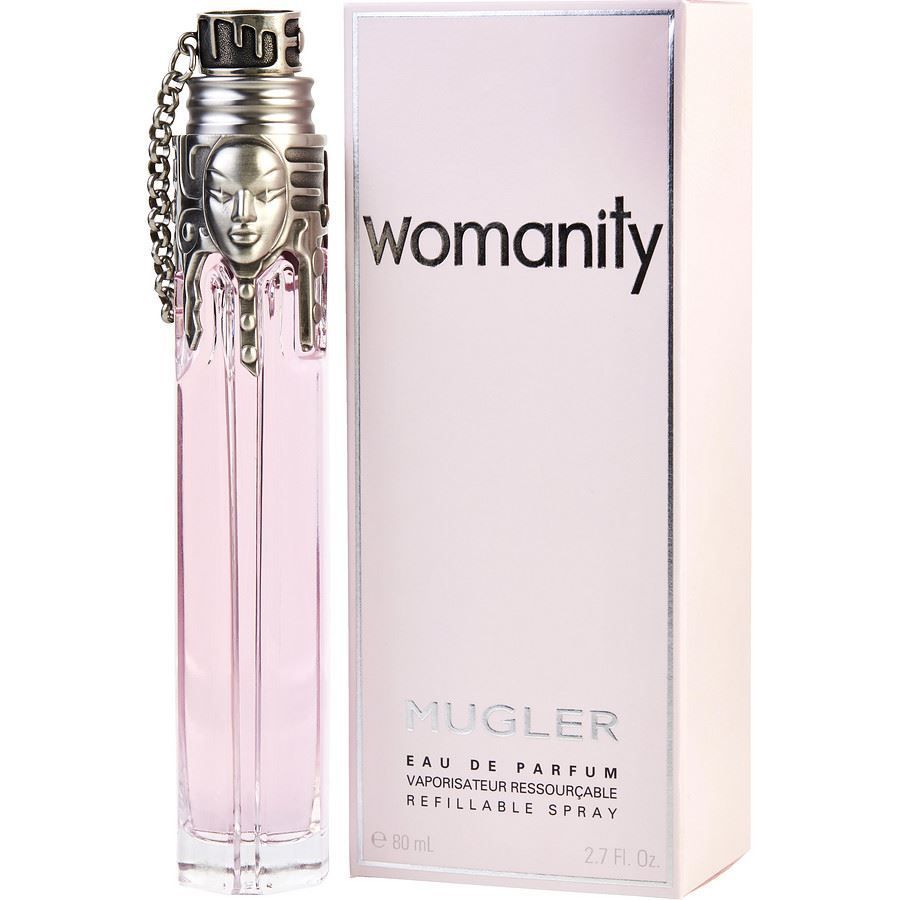 The first time I tried it I hated it passionately,but after a few months when I had a chance to receive it in a swap I decided to take it because I hoped it's a gem that right now my immature nose can't get it and it deserves some time..I used to hate Angel even more and after a couple of years suddenly I started to like it so I hoped the same thing will happen with Womanity.a half used bottle of Womanity was sitting in a dark corner of my drawer for almost three years until today,I decided it's the right time to give it another chance I don't smell anything wired,disgusting or out of place in it anymore.just a slightly sweet fruity note in a base of salty sea notes and some green notes.after trying hundreds of perfumes in the last three years,I know what I like and what I don't like in fragrances.now I can see why I used to hate Womanity.because I hate salty notes(the only reason I can't like Olympia),aquatic notes and most green,leafy notes.fig is not a favorite fruit note either so now I can see there's nothing wrong with Womanity.actually it's well made and balanced.just that I don't like it because it's not my type.to be honest,I feel the same love-hate relationship I have with Angel here too.after an hour I can't detect that salty,aquatic note and at those times it looks like a delicately sweet yet fresh,pleasant fruityfloral and I enjoy it at that times.I'm going to decant some of it and give it to my sister in law who I'm sure will like it.I will keep a tiny amount for myself to use,whenever I'm at home and I'm in the right mood to tolerate it's first hour(I really hate it's first hour.to my nose it's salty,aquatic note smells harsh and cold like an old piece of iron) make sure not to blindbuy it but also make sure to sample it and give it more than one chance.if you like it,it can be your signature

Wow, I wish I'd tried this sooner! Why didn't I? Errr, yeah, the hoo-ha reviews. I don't know how people smell BV in this. I tried and tried to pick it up. Nope. What I get is what the pyramid lists, no more, no less. Starts off as the inside of a delicious fig, so slightly sweet for the first few minutes. It's mixed with the salty scent of caviar (NOT fish, not brine, not marine water, not sea weed), then continues to the green scent of a fig tree heated by the sun on a very hot summer day. I pass a fig tree like that daily, and the perfume is a convincing replica of the real scent. I notice some people say it's aquatic. To me, apart from the initial fig fruit, it is a green scent, but not aquatic. I get where those associations come from though, since this is such an atmospheric scent mimicking the Mediterranean coast. But no worries about the Blue Lagoon scent of Ajax floor cleaner that you get in some aquatic fragrances. I suppose some people probably really dislike salty notes, so I'm guessing that's what reminds them of body odor or fish, but I personally smell nothing of the kind and ironically, Womanity gives off these wafts throughout the day that to me smell like....a freshly showered, very clean person! At a beautiful seaside resort. Maybe eating caviar with a halved fig. It projects nicely (one spray, two at most), but my bottle at least isn't very long lasting. About three to four hours I'd say. Not a beast, but it's just right for me. I'm scared to recommend a purchase because of how bothersome it is to some people, so don't blind buy, but please, I beg you, if you haven't yet, try it at the counter. Try it on your skin, when I tried it on a paper strip it was vaguely metallic and not much else (no metallic note on skin). If it works for you, it'd have tremendous signature scent potential, and is very different than most mainstream fragrances. I finally found something I want to keep buying. ETA: I appreciate that there are no unpleasant surprises with this scent. It has never turned on me. If your skin perspires a bit where you applied it, if it stayed on your clothes, or when it's way way in the drydown, it still smells pleasant. it doesn't have a note or accord that misbehaves under various circumstance, so I never worry it's going to do something funky out in public.

expected the bottle of scent to be a lot pinker due to the photo. The liquid is a very pale pink, you have to examine it closely to notice that it is in fact pink. If I didn't know it was figs and more about figs then I'd think it was a floral, this smells sweet and floral on me, yes it had a hint of sea breeze, well put together, beautiful scent that lasts to the next day. The bottle looks like it should be called Viking Woman, the bottle look does match the smell of the scent, even though as the name stands as Womanity the bottle says it all ♡

This scent is a power house. It has very heavy sillage and it lasts for several hours on clothes. The bottle is very lovely. I really like the hanging chain. I was really excited to try this scent because I love the smell of figs. Many perfumes that use figs use both the leaf and steam but I was in the market for a summer perfume that was based on the fresh, juicy fruit part of the fig. Upon first sniff I got a wave of sweetness with a hint of fig leaf as I continued to wear it the caviar note pushed through on my skin it smelt like salty perspiration on a hot summers day. I love the figs in the scent but I do not like the caviar note.

I can't quite pinpoint what it is about this scent that I like. I am NOT a fan of sweet or overly floral scents so if those are your favorites, you may not like this. I do enjoy a woodsy/musky warm toned perfume and THIS is it. I detect a note of cinnamon and it is this spicy quality that intrigues me most. I like it so much I don't really care if anyone else around me likes it or not! It is wonderful and I wear it just for me.

On first opening the box i could immediately smell the unique fig aroma, never smelt anything like it. Loved it. Applied the scent and it was sweet yet so intriguingly beautiful and complex.. Still enjoying the different notes that keep turning up. Excellent scent!

My dad bought this for me 2 years ago and i was so impressed with the bottle but i didnt like how it smells so i just kept it in my drawer. A month ago i just found out that this fragrance actually smells so good, like really good! I sprayed it on my wrist and when i decided to still hate the scent, it changed! Its very strong for the first 10 minutes until it settles down on your skin and it loses the strongness then becomes a unique beautiful scent that reminds you of beach, I SUPER LOVE IT! I feel bad for keeping this in my drawer for 2 years lol.

This perfume is gorgeous, I have been wearing it now for over 4 years and people are always remarking on the beautiful smell. It's more musky &amp; woody than really sweet or sickly, without being overpowering. The bottle is very unusual and different, which I love, you can also refill the bottle which is great. I would definitely recommend this perfume, despite the negative reviews. If you are looking for something that little bit different then go and buy it.

I never attempted to try this fragrance for I was polarized by all the awful reviews I'd heard saying it was fishy and nasty. A sweet swapper sent me a sample of this and I fell in love with it right away. It's not like anything else I've ever smelled and it's a fruity, salty, fresh scent. Perfect for summer and I don't think it's overwhelmingly strong either but does last most of the day. I got a &quot;half-used&quot; 1.7 oz bottle off fragrancenet's ebay store for $20. It was maybe sprayed once so I was happy with my score. They do have some left BTW. A lovely scent but I know that a lot of people dislike it, could be skin chemistry, so It's probably best to not buy unsniffed.