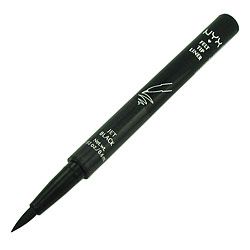 I bought both the skinny and fat. The fat has better pigment, even though they ought to be the same, but the tip starts to weaken and crap out after about two weeks, (I ended up snipping the very end off because it was frayed and useless), so that makes it harder to get the pristine line you'd want. Also, because the thin one doesn't have as great color payout, you'll feel inclined to go over the same line several times, but in the press you may end up removing some of the pigment you'd already put down. They're not bad, and certainly better than several other liquid/pen liners I've tried, but they're far from fuss-free.

I bought two of these at Ulta because they were BOGO 50% off. I had been looking for a cheaper alternative to the Napoleon Perdis Neo Noir liner (and previous to that, the LORAC liner). But after swatching on my hand once, it was clear that there was absolutely no comparison. These NYX ones are ok if you just need something cheap and don't care about things like pigmentation but the black pigment on these are crapola. You can tell they used blue dye to make the black in this, which results in just a blue black liner, not pitch black like the other ones I have been using. Sorry, but if I buy a black liner, I want it to look BLACK not BLUE. Waste of money.

This is not pigmented, looks streaky and doesn't stay put.

it's a nice eyeliner but it's just not long-lasting.. It's easy to apply and looks good but I wouldn't buy it again.

This is the first time that I have tried a liquid eye liner. I decided to try the NYX liner because I am in love with their eye shadows. I bought the Pen Eye Liner in Dark Brown. It's a slim liner so it's easy to apply. I tried to use this to tight line my eyes, but most of it ended up on my lower lids. This works great and it's long lasting. The lid on the packaging is fairly tight, so I am hoping that it won't dry out. Chances are I will be this product again ~ next time in black...