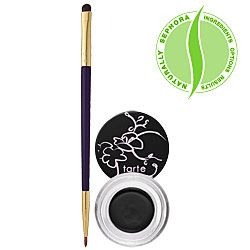 I really like this liner. It glides on smoothly, it has a nice silky texture, and the packaging keeps it from drying out at all. The longevity of this product is good as well. I've slept in this makeup (lazy nights) and it only slightly fades. I also ride a motorcycle and to my surprise it has stayed on pretty well, sometimes it MAY fade a little bit (due to extreme humidity/wind conditions underneath the helmet). However, I can count on this eyeliner to stay on all day and night under normal circumstances. This is the best performing eyeliner I have found thus far, so I will stick with it. My only problem with it is that it is a bit on the expensive side, especially if you buy it with the double ended bamboo brush. It also isn't as black as I would like it to be, but it's not a huge problem for me. EDIT: I went swimming with this liner and it magically held very well. My number one priority when it comes to swimming with makeup is that it won't smudge at all. It did fade a little bit, but it did not smudge.

A solid pot liner. I got the repackaged version, which did not come with the double-ended brush. I just use my Sonia Kashuk eyeliner brush on this instead. The pot this comes in is cute, with a gold lid. Nothing special, but so far, it has kept this from drying out (mine is a few months old). The product has a silky consistency that works with the brush and glides onto your lids really well. It doesn't skip or drag. You have time to make adjustments with q-tip, if things go awry. It stays put, without smudging, for hours. I really just use this for cat-eyes, not for lining my rims or doing a smokey eye, so I can't speak to how it would perform for those. I do have two issues with this. One, I wish the pigment was more intense. It's black, sure. But you are not going to get yourself an intense black line with this (as you would, for example, from MAC or from a traditional liquid formula), and it does fade as the day goes on. I have black hair, so when I have something that is just a wishy-washy shade of black up against my lashes, it is noticeable. And two, they market it as some nourishing thing that will adjust the oil on your lids or whatever. Let's be serious...the small amount of clay liner that you are putting on your eyes, even if you are doing something intricate, is not going to do anything to improve your skin there. Just call it makeup and leave it at that. This is not cheap, and I am not convinced that it is worth the price over, for example, NYX, which has a decent version of this at a drug store price. But if you have a particular loyalty to Tarte's natural philosophy (which, claims about skincare benefits aside, I do definitely appreciate), this is worth a try.

I bought this about a year ago and I still have quite a bit left. I own several eyeliners, different colors, different brands. In this Tarte glass jar, I bought the brown color, which is usually dark enough for someone with ivory skin. It's a good liner, but not quite worth a repurchase because of the first and only con I'll mention: CONS: 1. This doesn't have the longevity of the Bobbi Brown gel ink liners that I adore. That is the only thing wrong with it. It fades a little after several hours of normal wear and Bobbi's gels don't. I'm sorry, but it's true. PROS: 1. Nice color. The brown is a flattering dark brown, not terribly exciting but definitely wearable. 2. It came with a brush - that was awesome. I'm used to having to buy a separate brush. 3. The texture was nice - it glided on beautifully without any skipping (liquid liners) or tugging (pencils). It has the advantages of a gel liner but when it's applied it looks similar to a soft pencil, so it's not a harsh look. 4. Tarte is cruelty free. I believe Tarte's newer product,Tarteist, has more staying power based on my limited experience sampling it at the counter and based on reviews. Tarteist comes in a tube rather than a glass pot, and the formula is a little different from this one. So if I buy another Tarte liner, that's the one I would try. However, I don't feel that I wasted my money on this because at least I got a double-ended brush out of it. INGREDIENTS of Clay Pot Waterproof Liner: Dimethicone, Cyclopentasiloxane, Polyethylene, Isododecane, Polybutene, Trimethylsiloxysilicate, VP/ Exadecane Copolymer, Ozokerite, Candelilla Cera, Silica, Kaolin, Ethylhexylglycerin, Phenoxyethanol. (+/-): Mica, Titanium Dioxide (CI 77891), Iron Oxides (CI 77491, CI 77492, CI 77499), Ferric Ferrocyanide (CI 77510), Carmine (CI 75470).

I used to be a HUGE fan of this eyeliner...but since they changed the packaging, something is not right (even though supposedly, the formula is the same). All of sudden, when I started using my latest pot, the eyeliner started going on more watery and did not last nearly as long...and I kept getting smudges at the corners of my eyes during the day, which never used to happen. I wondered if it was all in my head until I read other online reviews also saying that since they changed the packaging, the product itself seems different (worse). After years of buying this product regularly, I actually returned my last pot and won't be purchasing it anymore. :( Too bad!

Have this in bronze. Very pretty. For me the color is too muted alone so I need to add it as a layer above my black to really get the full effect. But all around great product. Would love to try more colors

I absolutely adore this eyeliner. The product is not at all too thick to create very beautiful thin lines, which is what i generally fear with gel eyeliners. The product had great color payoff, and a great formula. 10/10 would recommend.

Let me tell you about my history with eyeliner. I don't always wear it because sometimes I'm too lazy to apply it and don't like how it can close off my eyes, but when I do wear eyeliner, I've never been too impressed. it would always smudge at the corners of my eyes which makes me look like I cried. or walked into the shower with makeup on. my very first gel eyeliner was Shieseido (pardon my french if its spelled incorrectly), and I absolutely hate it. It dried out in a matter of days. The second gel eye liner I've tried wad by ELF, now for $3 it rocked... until it turned into one. It dried out completely and because utterly useless. Now, onto the actual prodcut I'm reviewing; This is my third gel eyeliner and I'm hooked! it does not smudge for me, is STILL creamy as if I just picked up at Sephora yesterday (bought mine when I came home from military camp in late August). It dries completely matte and WILL. NOT. BUDGE. I love this! will repurchase once I'm out! xx

As an eyeliner, it didn't work out for me. But I got the copper and used it as an eyeshadow and it lasted all day, even without a primer. It's fast and looks very pretty with my eyes. I wouldn't consider it a staple but I would buy it again because it's the only thing that stays on during those hot summer months.

Maybe it is my bad luck, but the one I got was so dry and hard as a stone, that I couldnt even apply it - the brush, the fingers, nothing was ok to take some of it out and apply to an eyelid. Finally I put in some eye-gel, that made the eyeliner a little bit smoother so I could try it on, but only with a &quot;big&quot; size of the brush, and so it worked just as an eye shadow. I would not recommend it as you never know if you buy a good one or a dried up one. In my case seems there is too much clay in it or something.

I wanted to love it. After searching endlessly for an eyeliner that didn't give me 'coon eyes I had hoped this would be it. Day 1: Smudgetown, Population, This girl. What started out as the perfect (this stuff is creamy, matte and opaque from the start) ended in a mess. My boyfriend asked me if I was alright. If something was wrong. Yeah, this eyeliner. It doesn't deliver (although the brush is kinda nice). Maybe great for others, but not for these oily lids.