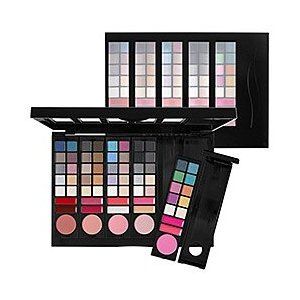 I've had this a while and got a lot of mileage out of it. I do like almost all the eyeshaodw colors, but the lip gloss is sticky and the eyeshadow gets into it :( ew. The blushes are great except for the bright pink one. I can make soo many looks with this pallete and it was a great gift from my friend! I also have two other Sephora pallets that I enjoy..

I got this palette as a gift and I must say that I adore it. &quot;Dinner in Paris&quot; (smokey eye) and &quot;Coffee In New York&quot; (browns) are my favourite. All the eyeshadows are soft and pigmented with minimal fallout, and you can create a lot of versatile looks. I love how it includes five blushers as well and two lip colours per palette. Granted, I hardly use the lipcolours but they are decent and I do not wear blusher. Some of the shades are not practical and I do wish they focused more on wearable shades. I will be using the pink eyeshadows from &quot;Shopping In Milan&quot; to mix with vaseline and create my own lipcolours. I also think the pop out empty palette was a great idea.

The lip glosses suck but the blushes and eye shadows are pretty decent. And I love that I have ALL the colours I would ever need! I got mine for 36$ which I consider a steal, this is probably one of the best palettes I have ever bought.

I received this as a gift and was a little hesitant to use it at first because eyeshadow palettes tend to have less pigmentation than their single counterparts, but the pigmentation of most of the colors in this palette are actually pretty good. The ease of use though varies for some of the colors though; some are silkier than others, some are really chalky, and some are so sheer it can be a little disappointing unless you love sheer coloration. There's a good mix of matte and shimmer shadows included and each of the 5 palettes has a good range of light to dark shades, great for creating depth! The eyeshadows don't have much lasting power on their own, so I definitely recommend an eyeshadow primer underneath them. I use Victoria's Secret Lasting FX Eyeshadow Primer and it works well underneath these, without feeling heavy. In each of the 5 pop-out palettes there is also a white or off-white that's very similar to each other that some people would think they're just dupes, but if you travel often and pop the palettes into the included travel case, the included highlighter shadow in each of the 5 palettes is actually a great idea for those who take these palettes on the go. I know I do! I don't have great things to say about the lip glosses/colors included in this palette; most of the glosses don't stay glossy very long to begin with, and they're pretty sticky. During storage, the lip pots tend to catch eyeshadow fallout too and it's not fun cleaning it out, so I don't even bother! The only lip colors I use that are actually pretty good are the reds; they're not drying, and they're very opaque! Perhaps my favorite thing about this palette is the blushes; there are enough colors to create not just a single blush look for each palette, but to use all of them to contour the face. They're silky with either the finger or the brush, you pick up just enough to lightly layer it on your face. And the blush shade variation is a good range, for whether you want a dramatic contour or a light pop of color. My least favorite thing about this palette is the quality of the packaging. I love that it's a 5-in-1 palette and that you can pop any one palette into a portable palette for when you're on the go, so in fact the packaging design is very ergonomic. But the security of the latches is very poor! For one, the large palette casing doesn't close properly because the snap closure itself, SNAPPED. Likewise, all of the 5 palettes also have a plastic nib that's supposed to secure it to the larger case; all 5 of their nibs snapped, so while they can all sit in their wells in the larger case, they're not secured and can fall out if I don't handle the palette carefully. The only piece of this palette of which the hinge hasn't snapped is the travel case. Fortunately, it's the one reason why I still use this palette. It's still a great travel piece despite the poor packaging quality.

I received this palette as a gift and even though I generally use just cream or mousse eyeshadows in natural shades just for a quick wash of colour on the lid, I was tempted to try it out. Generally, I like this palette. It has lots of colours to play with, but their staying power is not very high, so using a good eyeshadow base is a must. A base also makes the colours look more vibrant and intensive on the lid, because by themselves they look rather subtle, which can be a plus, if that's the effect you look for. Also, I love all the blushers, the colours are fantastic and I love the formula. I'm not too crazy about lipcolours, I find them sticky and really unpleasant to wear. So basically, I would recommend this palette to girls or women who have just started their adventure with make-up and are trying to find colours and looks that will suit them best.

Love this palette because it contains a variety of colors. I am used to urban decay and mac eyeshadows so I wasn't expecting a lot from sephora eyeshadows but they genuinely suprised me. This palette is a good way to get different colors from brights, neutrals, to the dark smokey eye colors without having to pay $14 for each eyeshadow. Some of the colors are bit muted like the purple one, which I had high hopes for but the amount of choices you get with the other colors makes up for it. The lipglosses are nice in texture and contain shimmer but not the gritty kind. The blushes are amazing and highly pigmented. The travel container is convenient especially when you are travelling and don't want to haul your make up around. The only thing I don't like is how the products are closely situated to each other so you have to be careful that the last row of eyehadows doesn't enter your lipglosses. Overall, a great palette to have and darker skinned ladies will appreciate the color choices when compared to other palettes.

I really like this palette! There are so many colour choices for the eyeshadows and the pigmentation and the lasting power is decent. I think it's just sooo cool that it pops out :) The blushes are really nice, but the lip glosses don't last that long but whatever :) However, one complaint I have is that a couple of the eyeshadows have really large chunks of glitter in them :( In the beginning, they were nice with some shimmer but as you get more into the eyeshadow, there are HUGE chunks of glitter. There isn't even that much eyeshadow itself left, almost just glitter. Luckily it's only a couple of colours like that :)

In LOVE with this palette!! It has such a great range of colours, from neutrals to subtle colours, dark smokey-eye colours to brights! I find the shadows to be great quality! There are a few shades that I don't love as much as far as pigmentation and texture but it's seriously like 3 shades, out of 50 soooo can't really complain about that too much! The lipglosses have a great, soft texture - the nude one is AWESOME. The blushes are perfectly pigmented and buttery feeling, and lovely colours! All in all this is an awesome palette and I would buy it again and again!

The packagin is quite big and bulky but you can obviously take it out as a travel palette hence its name. The colours are quite pigmented, with some colours more pigmented than others but the texture's smooth and you have a lot of different variety. The glosses are so-so. They're a bit drying but not too sticky and the colour pay-off isn't bad though! All in all, it's a nice deal :)

I like these eyeshadows but I don't love it. The packaging is sort of bulky but it's passable because the eyeshadows are of decent quality.