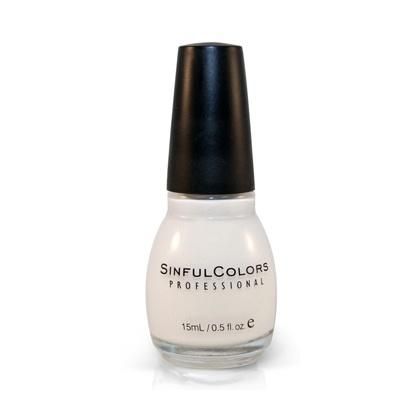 I've been rediscovering pale crème polishes but I haven't come across a white as fabulous as this! It's far superior to OPI, Essie and other more expensive brands. What a payoff you get! This is a stark white, heavily pigmented. It's on the thick side, so you need to work the brush carefully, but 2 coats is all this requires. Coverage is great, it wears well. It dried quickly. I use Seche Vite as a top coat. SV hardens the polish, makes it glossy and dries it quickly. Highly recommend!

Great pigmentation, I can usually get away with one coat of this polish. My only problem is that is takes FOREVER to dry, sometimes up to an hour because of how thick it is. This is by far the best white nail polish I've used since it doesn't look streaky and the pigmentation is amazing.

I generally use this white as a base for nail art, not really into the stark white nails, and it works great for that. It goes on reasonably opaque and even for me. It's not quite a one-coater if I were wearing it alone, but because I am layering other things with it, I find a single coat to be enough for my purposes. Yes, it's on the thick side, but I found it to be smooth and relatively easy to control, and the alternative seems to be watery, translucent white polishes that take forever to build up. I'd rather put on one coat of this stuff and clean up the edges a bit afterwards, than sit around putting on coat after coat of some of the other watery white polishes I've seen. I wonder if some of the other reviewers have gotten old bottles that sat around forever in the store? It's also nice and opaque when used over other colors, which isn't at all true for some of my other light-colored polishes, which makes it nice for nail art on dark base colors.

This is my second bottle, and it's still the best white polish I've ever used! I've also tried the Sally Hansen Salon Manicure &quot;Let's Snow&quot; and multiple bottles of the Sally Hansen Xtreme's white (can't remember the name) but neither are as good as this. The polish does become thicker after a few weeks of use, but it hasn't been a large enough problem for me to not use it to completion. The colour payoff is fantastic, two coats is enough for this one. Haven't used OPI's white polish so I can't compare but for the price, Snow Me White is far superior.

Great nail polish! Love the brush, it's big enough to spread the polish on my nail and the color goes on nice and opaque with just two coats. Not streaky or watery - and that's a great thing when it comes to white polish. It's only $1.99 and it's 3-free! Love it!

Why have I never tried this white before??? This is a great little product at a bargain of only 99 cents on sale and even at full price it's still a deal at 1.99. I used this for a fun summer mani and usually I use Sally Hansen White On or OPI Alpine Snow, but I had just purchased this and it was still sitting on my desk. I buy cheapie polishes for nail art and this was going to be for dotting and floral art and I had not intended on using it for actual polish on a full nail. Well, I grabbed this up and gave it a try and was very pleasantly surprised. This goes on smoothly and evenly and without streaks, patchiness, pooling, flooding, or balding. This was very nearly opaque in a single coat! The formula is not at all watery and this is a nice consistency and not runny or thin at all. It laid right where I stroked it on and did not run into my cuticles or drip from the brush as thinner polishes tend to do. This actually was much easier to work with than the Sally Hansen White Out which is a brand new bottle and thin and runny, and much cheaper than OPI Alpine Snow which requires 2 coats anyway. This is a real bargain for a couple of dollars and I prefer it over Wet n' Wild, Sally Hansen, and even over my OPI. You can't tell it's inexpensive so why pay for a $9 OPI when this little beauty does the same job and in the end you can't tell the difference? I thought I already had this in my stash and have overlooked it so many times at the store and I'm so glad I picked this up for nail art as it's perfect for a full on nail polish too! Yes, please!

This is an average white polish. It's thick, as others have said, so it can be hard to manipulate. You MAY be able to get it opaque in one coat, but I think it really needs two to even out any streaks. It's not a terrible polish, but since every polish brand out there has a plain white cream, it's not hard to find a better one.

This is a basic white nail polish color. It’s not glittery and it’s not sheer, it’s exactly what I was looking for. It gives a perfect opaque color with only two coats and it is not streaky like other white nail polishes I have tried. It’s thick but that’s why I love it, I hate runny translucent colored nail polishes. I make sure to apply my quick dry top coat and I’m set. I can’t wait to try out more colors from this brand.

In some ways, this is one of the worst polishes I've ever used. Bubbles like crazy, super thick, takes FOREVER to dry. But that being said it does have one thing going for it and that's a decent pigmentation. You can get away with two coats. All other white polishes I've tried have been super streaky and take too many coats to get an opaque look. I will probably use the rest of this as a base for glitters and nail art but after it's gone I'll look for a better white polish.

This is my first white polish, and to be honest, I was expecting a little more. The consistency was too thick for me which made it a little difficult to apply just the right amount of product evenly. The first coat was streaky as heck, which I was expecting, and dried pretty quickly. The second coat was harder to apply since it was thick and a little tacky, which made me have to apply a thicker coat and that seemed to help, only there was a slight bubbling. Not a big fan of the thin brush since I'm so used to the wider brushes that have come out recently, and am probably going to purchase a little less &quot;white-out&quot; white for all over the nail like Essie's Marshmallow, however it will be good under neon colours to make them pop.