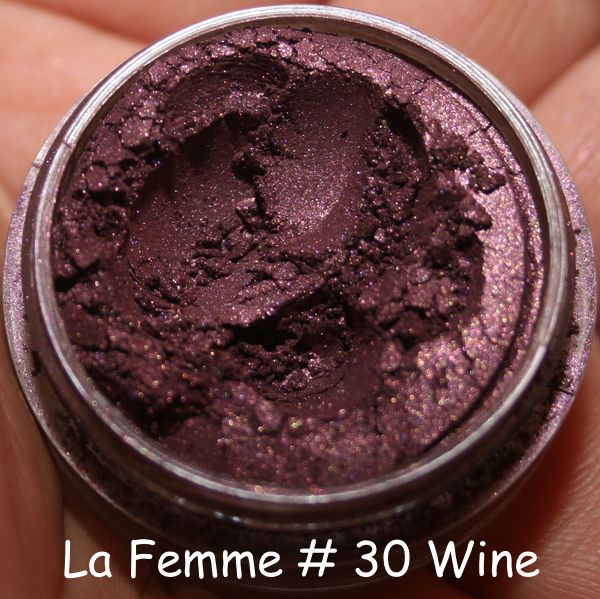 I bought nº 5, 31, Iris, Grape, Emerald and Aqua. Aqua and Emerald are great, shimmery and what you expect pigments to be. Nº 31 is a nice dark purple-maroon good for the V. But I am deceived with quality and colour pay off for nº 5 (pink gold) and Iris, colour does not stay long (even with shadow insurance) and are not shimmery. So I guess the quality depends on the colour you choose. It might be that I expected something similar to Mac´s pigments and they are not, but for the price.. I cannot complain!! I would not buy again because I prefer to try other brands (pe.Fyrinnae or Ben Nye). I will try them over a creme eyeshadow and edit if it works better.

I bought this years ago at a little no-name beauty supply store. At the time I thought it was a bit of a splurge (I think it was something like $6) since I wasn't familiar with the brand, and most of my cosmetics came from the clearance section at the drugstore, but I'd been searching for this type of blue for ages. The color payoff, especially when applied with a wet Q-tip, brush, or finger, is amazing. The reflective nature of the powder and the color makes me think of mermaids. And if just swept on dry it makes a pretty, shimmery layer of sheer color. It is a bit messy to apply, and I frequently get a lot of the powder fallout on my cheeks, which subsequently makes a mess when I try to remove it. Using a tissue underneath the eye is probably a good idea. Actually I don't think I'll ever buy this again because there seems to be so much of it in the pot that I'll never run out!

First let me begin my review by saying that La Femme Cosmetics manufactures all of the sparkle/loose dusts, most of the cheek disc colors and some of the eyeshadows including the color discs, ultra pearl products sold by Napoleon Perdis Cosmetics. What I find so appalling by this fact is that Napoleon Perdis doesn't even bother to repackage the La Femme Cosmetics products they sell as their own. Napoleon Perdis just slaps their names on the product and charges upwards to $15.00-20.00 more per product than what La Femme Cosmetics sells the same product that they manufacture and also sells under their own name -- which is insane but very true and well documented. For example, La Femme Cosmetics' Sparkle Dusts on average cost $4.25-$5 each whereas Napoleon Perdis Loose Dusts cost $20.00 each -- and it's the exact same product!!! This is absolutely ridiculous. OK, now that I have gotten that out of my system, on to my review. I purchased the La Femme Sparkle Stack #2 from Elisha's Gift Box (an eBay vendor) for $14.95 not including shipping &amp; handling. Included in La Femme Sparkle Stack #2 are the following sparkle dusts (also please note that numbers of the La Femme Cosmetics Sparkle Dusts and the Napoleon Perdis Loose Dusts are the same, however, Napoleon Perdis has changed the names on &quot;their&quot; products). #14 Champagne Gold is a lovely white goldish pigment that reminds me of a whiter loose version of NARS Albatross Blush. #1 Gold is a light yellow-gold pigment. # 7 Sandstone is a beautiful light beige pigment. #15 Bronze is a rust color pigment. #16 Copper is the color of a copper penny in a pigment which is lovely, positively lovely. #27 Sable is deep rich chocolate brown pigment. The quality of the La Femme Sparkle Dusts is quite beautiful, they apply easily, have a wonderful soft consistency, are highly pigmented and have great lasting power (as with all pigments the lasting power of them is only as good as the base under them). IMO these sparkle dusts are better than those sold by LA Colors, LA Spalsh and NYX and are on par with the pigments sold by MAC. I would highly recommend the La Femme Sparkle Dusts and if you purchase them separately they are sold for $4.25 each by www.MakeupMania.com.

If I can't afford Mac, gimme some La Femme! If more colors were available, they would probably be my favorite loose pigments brand. Gosh- they've fined- milled the *Heck* out of these. Simply beautiful and great quality. Love them!!

This is for #31 Black Orchid. There really should be a separate category for this but there isn't, so here it goes in the generic pile. Black Orchid sparkle dust (#31) is, on the eye (wet is best, dry is fine) what MAC Beauty Marked looks like in the pan and should be like. It's so pretty. a blackened maroon very finely milled sparkle pigment. it's easily blendable and lasts. I really love La femme SD's. they are really superior pigments at a fraction of MAC's pigments. (yes, less product, but who here has ever finished a jar of pigment?) I highly recommend this shadow to anyone that was disappointed by MAC's beauty marked. I will repurchase this if i ever run out.

I have #10 magenta, which is like a floury version of MAC's Pink Pearl pigment, down to its duotone nature. The eye shadow does migrate, but I haven't had any problems with (technicolor) panda eyes, or much creasing (although I always use a base under it). They retail for about $5 (I got mine for $4.25), and come in a huge pot. The only downside is that the pots have no sifters, so if you're as clumsy as me....good luck with that.

I currently own 4 of these Sparkle Dusts. (#5 Opal, #1 Gold, #28 Blue, and #9 Golden Sunset) &lt;br&gt; The quality is great. These products are actually exactly the same as Napoleon Perdis loose eyeshadows (I also have a Napoleon Perdis loose eyeshadow in Sand Beige)and it has exactly the same consistency and color payoff. It's very fine and adds that great extra shimmer to the eyes for a dazzling but not too bold look. &lt;br&gt; With this cheap product coming in and giving great color payoff, easy application, and same competition to higher brand loose eyeshadows, it's definitely something to invest in.

These sparkle dusts are good quality pigments, i will buy again only because they are pretty cheap. the only bad thing besides the packaging is that you do have a lot of fall out on your face and especially your cheeks so make sure you don't put on your foundation first!

I have all the colors except matte black. These are very pigmented and apply smooth (are finely milled). As the name suggests, these are shimmery-- too shimmery for my taste so I don't think I'll be repurchasing. Packaging can be improved. Caps can be loose so when jars flip over, most likely, product leaks through and get all over your hands when you open it (arghh messiness T_T). Overall, price is good so there is nothing to lose if you like working with pigments and shimmer!

i have #30Wine and #15Bronze. the wine is very pretty on brown eyed redheads,but the bronze is more like orange-copper! not the color i was expecting. ill prob. be putting some of this up for swap later. it creases badly after a short time wearing it dry,but i have discovered if you put it on wet it looks amazing and stays better. very hard to blend though. ill give this stuff another shot. gave it another shot and still didnt like it,up for swap it goes!