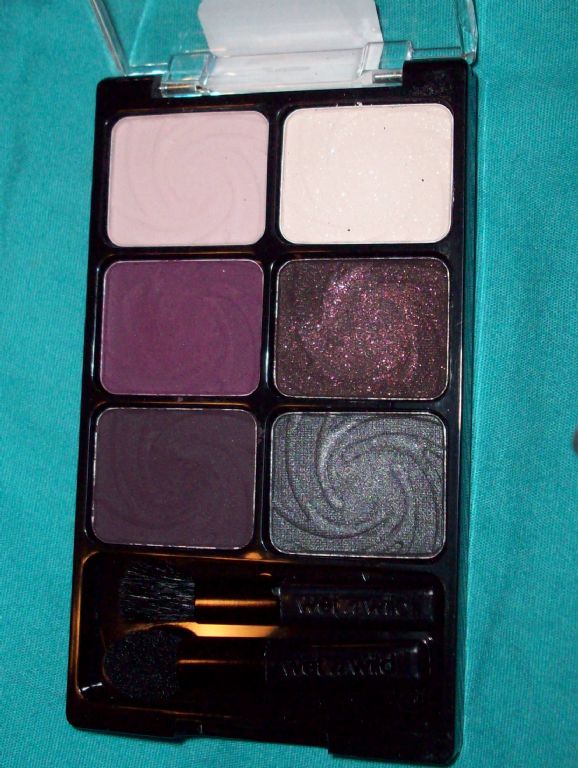 Just wanted to let you all know that this and all the (discontinued) ColorIcon Palettes are still available on drugstore.com. I bought Lust and Vanity and hope to review them soon. Edit 8/10/12: Now this is more scarce, but maybe you'd find it on eBay or Amazon. I don't recommend that you waste your time trying to find this palette. Why? The pigmentation and blendability are sub-par. I've spent some time playing with this palette and the majority of the looks I've tried have left me looking terrible. The shades are chalky and either too sheer or have major glitter fallout. There are only two shadows I like in this palette. The matte pinkish white (top left-hand corner), while chalky, blends well for a highlight. The satin slate gray is really a gem - it blends well and is nicely pigmented. Overall, I'm disappointed in this palette. I swapped away my backup and I wouldn't buy this again if I had the chance.

I still can't believe what tremendous strides Wet 'n' Wild has made as a company! I remember painting my nails with their one dollar polishes when I was in middle school! Anyway, like so many others have said, this is an AWESOME product. All the shadows are soft and highly pigmented so they're easy to work with. The staying power is also impressive... I wore this the other day without primer (oops) and it lasted a good 6 hours without a single touch-up. I will absolutely buy this again because I love deep, rich shades of purple and the quality for this price cannot be matched.

Super great pigmentation. love all of the colors but especially the purple. Excellent for smokey eye. Overall it lasted a long time w/o ceasing. Loved it! I am a little worried about how durable the package is but I still love it b/c it's highly pigmented.

SkinVery Oily, Other, Not Sure

W'n'W knew what they were doing when they created this palette. This is a must have for those of you who like to create dramatic, sultry and damn sexy eyes! I bought this at Walmart and this was a fantastic bargain. I applied the metallic grey shade over most of my eyelid about 7 hours ago (my eyelids tend to get a little oily as the day passes) and I have very minimal (hardly noticable) creasing. For a non-department store brand that cost less than $6cdn, this is fantastic. The colours are really sophisticated and with a bit of blending and mixing, can suit any complexion. These shadows are highly pigmented which is great for my mocha complexion. I love to wear my Dior eyeshadows because they have great pigmentation and never crease (even without primer), but with confidence, I consider these shadows to be a close second.

This is an awesome smokey eye palette. It has alot of varitey and is of excellent quality. As much as I love it, I probably wouldn't repurchase it if it didn't have that AMAZING gunmetal-ish shade in there. Ya know, that metallic slate blue one on the right side? That shade is the love of my life. It's so pigmented, easily applicable and classy. Yeah, the rest of this palette is great and all, but that gunmetal takes the cake.

I love this palette. This is one of my go to palettes as it is so versatile. It has a great color payoff and is so easy to blend. It's nice that there are both matte and shimmer sides so I can change my look by choosing a different finish. My only complaint is that the packaging isn't very durable and the lid breaks off easily, I plan on trying to de-pot them in the future. Love, love, love the product.

I like this palette. The colors are wonderful and I love that half are matte. The problem I have is with it's staying power. I use a Mac paint pot as a base with shadow over. Most eye shadows last 6-8 hours on me. This eye shadow started to disappear within 2 hours. I'd rather spend money on something I don't have to reapply multiple times a day.

Not bad for a drugstore brand. Highly pigmented and nice colors. It stayed on my eyelids longer with a primer, but decent enough without it. So you can use it alone or with a primer. It doesn't matter because the colors will still pop out. I have oily skin so primer for me is a must. You may notice the shimmers on the pictures, but it's not that glittery in person. I can use this daytime with out looking too dramatic. I also bought the other color palettes and like them all. My only downside is the applicators, I wish they just stop including it, to avoid paying extra for packaging.

This was an impulse buy for me because I saw it and went back to get it after a few days without reading about it. I wasn't influenced by any reviews. For the record, I'm not a fan of the large WnW e/s palettes because they were too powdery and went everywhere on me, even with a primer and setting with powder. These small 6-pan palettes seem to have a different texture, but still a lot of pigment. I was in the mood for a strong eye, so I put the dark, sparkley purple on my inner lid and the brighter purple on the outer lid, nothing in the crease. The dark purple was a little hard to blend with a damp MAC small eyeshadow brush, but I blended the lightest color over both dark shadows with a blender brush. I also used a small amount of dark brown eyeliner and a touch of the ligtest shadow on the lower lid. I really liked the look because it was an intense eye but less harsh than black e/s would have been. Somehow it didn't bring out the dark circles under my eyes as dark e/s can. So I think this is a very useful product but gave it a 4 because I really had to work to blend it. Also, the was a bit of creasing after a few hours, but a very dark shadow will show this more. I would buy it again if it broke or I lost it. I won't ever use it all. By the way, my eye look was very different than what the examples here show, so I think this product has a lot of potential for creating different moods.

To start off, I am a makeup snob. There are very few drugstore products I will buy because I'm very fussy, especially about eyeshadow. I like good blendability and high pigment density, neither of which are usually available in a drugstore line. Wet & Wild is suprisingly the exception. I find there shadows to be better than some high end brands (I'm looking at you Stila), and comparable to MAC as far as texture and pigment. I travel a lot, so I wanted one eyeshadow pallate that could take me from day to night. I'm an NW15 (actually 10) with pink skin, and this is perfect. I can either do a nice natural eye, or a smoky purple or smoky gun metal, just by changing my liner. So worth the $5.