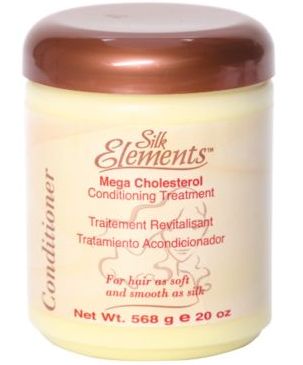 So I think the problem here is that this wasnt suitable for my hair type. The sales girl at Sally's said that this was for any hair type. However upon use, it weighed my fine straight hair down and left it feeling coated and stiff. and I had to shampoo a few times to get that feeling to go away. Thankfully it was free with my and renewal so I didn't pay for it.

Sadly, I'm not understanding the love of this product. I've used it several times now. With heat. Without heat. Overnight. Just seems to do absolutely nothing for my hair. I'll go back to my Ouidad Deep Treatment.

I have double processed relaxed and color treated hair. This is the best DC I have ever used. I've been using this DC for the past couple of years and I love it. I have tried the &quot;Queen Helene&quot; cholesterol, but it always left my hair hard and stiff and very tough to comb afterwards. The &quot;Silk Elements&quot; is so different it softens and smooth hair and has wonderful slip. I leave in on my hair for about an hour or so under a plastic cap then I rinse. My hair is very moisturized and easy to comb through.

I bought a few sample size/few use packets at Sally's and a few full sized of a lot of products and I'm going to use them all at least twice before making a final decision, but I'm going to start now. The products were: Proclaim Argan Oil Intense Hydrating Masque, Creme of Nature Argan Oil Intensive Conditioning Treatment, Ion Effective Care Treatment, One 'n Only Brazilian Tech Keratin Deep Penetrating Conditioning Treatment, Silk Elements MegaSilk Moisturizing Treatment, Cantu Shea Butter Leave-In Conditioning Treatment, Silk Elements Mega Cholesterol Conditioning Treatment, Organic Root Stimulator Hair Mayonnaise I decided to buy this because of the reviews on here, and I also attempted a pre-poo because of the responses that that might work best on my type of hair. This is a heavy cholesterol treatment, but doesn't really have a strong smell. I put it on dry/slightly dampened hair and left it on for a few minutes. Then I shampooed out and followed with conditioner. I can see why people think this is too thick to just rinse out. I shampooed and still feel like a little might be left. It felt slick on my hair in the shower, like most do, but afterwards I don't feel a ton of moisture or silk like I was hoping. When it dried, I felt like this was locking it up. It seems even dryer than normal...Like moisturized somewhat but frizzy and crunchy on the ends. :( It's not that great, and I even shampooed after. And I know some people said to shampoo again the next day but I don't wash my hair that often. I don't feel like jumping through hoops for this product. It's just not simple and effective enough for me. :P One 'n' Only so much better. I don't think I'm keeping this. I did also like the Silk Elements Mega Silk Moisturizing Treatment better than this hair cholesterol. Though I might stick to just getting sample sizes of that one since I love the One 'n' Only so much!! UPDATE: Ok so for the sake of science, I used it again. This time, I shampooed first, put it in, left it on for a few min while I did things out of the shower, went back in, re-shampooed and followed with a regular conditioner. Last time I just put it on dry/partly wet hair and shampooed after. BUT I feel like if it's not silky and the best thing ever then all this work isn't worth it. I have others I just put on like a regular conditioner, shave and go about my shower, rinse it out and it's glorious. It has to compete with time and ease as well. And so far I not thrilled. I gave it a fair second shot and my hair is still a bit chunked together, though it is a bit softer than the first try. When I break the spirals and chunks up it's frizzy, so overall I don't like this and I'll be returning it. Everyone is different but for me it didn't work. :(

My beloved hair fatty!!!! This will forever be in my arsenal. Even if its not natural or organic, as are a lot of products for people with transitioning hair. But this is wonderful, wonderful stuff. On my very dry, scroched, thin sharpie ultra fine line thick strands, relaxed/transitioning 4a hair, this is heaven. I slather it on my dry hair cand leave it on for about 24hrs. Just normal, 5-6 days from last week´s washed hair, and kaboom, my hair feels and looks like silk. It detangles my hair greatly and leaves your hair looking so healthy. My transitioning areas feel so soft. A friend of mine ¨deep fried¨my hair using a flat iron since I wanted my hair straight for an award at school, and after I used this, you´d think it never happened. It looks like my hair did when I first relaxed it. If your hair is very damaged and or dry, this is a great great to have.

This is a wonderful moisture based deep conditioner. I usually don't review hair products simply because every product won't work on everyone's hair.. But this stuff is amazing. It adds moisture and strength to my hair. Other moisture DC's tend to make my hair a little weak from all the moisture. But this stuff has just the right about of protein (small amount) to keep my hair strong but the right about of moisture to get it silky. I have no tried it with added essential oils but I will in the future. I would recommend this product to anyone on a hair journey. It's relatively cheap for the amount of product you get. I think I spent 8 dollars and I've had it for about 3 months now and only halfway through the tub using it bi weekly. Ladies, definitely give this DC a try! You won't be disappointed. :)

i love this stuff. this is what i always DC with. one thing i notice is that if you add oils to it when you use it it WILL work. i added EVOO, EVCO &amp; HONEY after using it a few times &amp; the results were amazing. my hair was sooo soft.

I use this for my thick, multi-textured, virgin, long hair. It gives it that extra shine and swing to it, and makes straightening sooooo much easier. The scent is OK, but not bothersome to me. I usually put this on, and hang out in a shower cap for a while, before rinsing out ;-)

I can't believe more people haven't reviewed this product! It is amazing!! My friend actually bought it for me (from Sally's) because I was always complaining about how my wast-length over-processed hair felt so ratty and dry. I am soo happy she got me this stuff because it truly works wonders! In the shower I washed my hair and applied this from my ears down the lengths of my hair and concentrated on my tips. You don't need very much as it is very rich. I worked it through my hair for an additional 2 minutes or so, just to ensure it was covering evenly. I clipped my hair on the top of my head and proceeded with my shower for about 10 minutes and rinsed my hair out. It felt very silky in the shower but as it began to dry I noticed it felt kind of sticky and yucky. My hair felt tangled and heavy and I was about to write a negative review for it UNTIL I washed my hair the next day with my normal shampoo and conditioned it with my normal conditioner and OH MY my hair felt sooo silky! Once it was completely dry I couldn't stop running my hands through it and it looked so much shinier and healthier. Just as the other reiewer said you can really notice the difference when it is wet in the shower: it feels like wet silk with no tangles! I highly recommend this product for ANY hair type! My friend has very curly/kinky Afro-American hair and I have very fine straight hair and it worked wonders for both of us! Try it! It is a good price and you don't need to use it every day, just as a deep conditioning treatment. If your hair feels strange right after rinsing it DON'T GIVE UP, it will feel AMAZING when you wash it normally the next day. I love this stuff and I will buy it for as long as it is on the market!

This is by far the best hair product I have ever bought for my hair! I cannot believe that I didn't try this stuff before. I have platinum blonde, overprocessed hair that dries out easily. I hate to wash my hair more than a couple of times a week due to the dryness and damage from blowdrying, but it gets so ratty easily that I have to wash it; and the more I wash it, the drier it gets. I usually use the Wella In-Depth treatment as a regular conditioner... I just leave it on a lot longer (for the recommended 10-15 minutes) in the shower before rinsing. I ran out of Wella the other day so I decided to try something different. This product was one of few that cought my eye mainly because it is a deep conditioning treatment and it only cost about $3. I figure it couldn't hurt to try it so I bought it at Sally Beauty Supply. I am soooo glad that I picked up this treatment. So far I've only used it twice and I cannot believe how great my hair feels; it's no longer nearly as dry as it used to be. I bleached my roots the other day and used this treatment afterwards. The product comes in a 20oz tub. It is a bright yellow, thick paste. Doesn't smell great but it's not awful either... it basically smells like any other hair treatment - kind of floral I guess. The scent doesn't stay anyway so I guess it's not overly important. I basically shampoo, rinse, apply this product and leave it on for about 10 minutes in the shower before rinsing. The first time it made my hair feel almost greasy in the shower, but after rinsing I realized that my hair felt much softer and more manageable. Today was the first time I washed my hair since doing my roots and I couldn't believe how silky my hair felt in the shower. Usually when I first get it wet and shampoo, my hair feels very course, tangled, and just downright awful. This time there were absolutely no tangles, my hair felt very smooth and manageably even when wet. I typically use a detangler and a leave-in conditioner after washing my hair so I can comb through it prior to blowdrying. Right now I don't feel the need to use either because my hair is so silky that I can defintely comb through it without problems. I have NEVER been able to do that before. This is the best product ever for chemically overprocessed, dry hair. I will definitely keep repurchasing. For this price there is absolutely nothing better out there (and I've tried many of the other expensive salon brands like Matrix, Redken, Nexxus, etc).