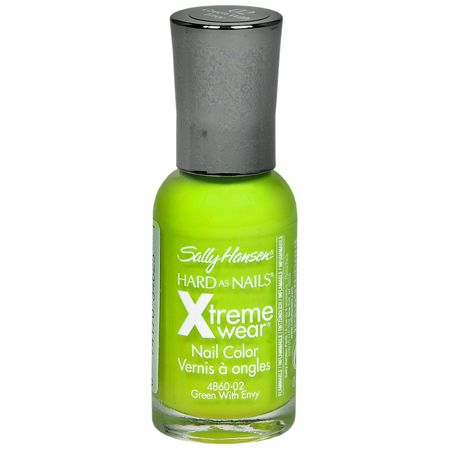 This came out brighter than I expected from looking at the bottle - it was definitely lime green. It's a happy summer color which I really like, and have received a number of compliments on. It's a very durable creme polish, opaque in 2 coats. It has a beautiful gloss; I have worn it on its own, and have also topped it with Opi Nicole Heavenly Angel for a very unique finish (I use a single top coat of Revlon for both looks). Very easy to apply, self-levels well too. I have a bevy of colors from this line, and highly recommend trying them. Very inexpensive, hard-wearing, great colors/finishes. You can't go wrong!

I became bored with the colour on its own quite quickly. It's just a simple spring green. It's a bit pale for me. If I'm going to go green, I want it really green. This is not lime green. I used to like it with "Lime Lights" also by Sally Hansen over top. Now I probably won't be using it except in combination with other colours. The polish goes on smoothly, but the issue I have with xtreme wear is that it takes longer to dry than anything else I have, and doesn't really last "xtremely" long, mainly because you start ruining it before it even has time to dry. It's a good colour, just not my thing anymore. Greens rarely look good on nails.

Loved this polish! Awesome brush. Perfect in 2 coats, very smooth. I wore it for 3 days with NO chips! Love Xtreme wears, they are amazing. Highly reccomend.

Beautiful colour, great application. However, I will not repurchase due to the fact that I just can't keep this colour on my nails for a long time, it's hard to match with and it just looks bad on me.

I am in love with the Xtreme Wear line of polishes. It's everything that I desire in a polish. Great brush, great formula, excellent price, and fun colors. Two coats and you're all set! Green with envy is a fun lime green that immediately caught my eye when I saw it in the store. It's gone on my toes once, and I finally took it off after three weeks-one month due to minor chipping. Mind you, I hardly ever put base or top coats on my toes when I do them, so I'm very impressed.

I am in love with this color!!! I told my mom I wanted a green so she bought this for me and I LOVE it! I had my eye on Ivy League but this is perfect! It went on very nice with no streaks! You have to buy it!

I love Sally Hansen nail products, & the Xtreme Wear collection is great. I loved the color when I saw it on the shelf & it was on sale for $2. On my nails the color looks great. If you love green nail polish but don't want a heavy look, you might like this color. It would be great for summer!

My absolute fave colour! Everyone always asks me about it.. definitely recommend.

This polish is like Blue Me Away without the staining! I love that it is this lime colour. Again, a wonderful colour for summer, but it is by no means a mature colour. It was perfect for my Frankenstein nails for Hallowe'en

I dislike the packaging with the tall bottles, but have several SH Xtreme Wear polishes. This one, however, was way gooier than most, so application sucked. Also, it was harder to remove than others in the same line. I probably had the misfortune of buying a bad batch, but whatever. Not totally in love with the color, but it was alright. Wear was good, probably due to the fact it was thicker than normal, but also took much longer to dry (try forever). Not impressed with the shine - it seemed duller than most. Had I purchased a better batch, I might be more in love. As is, just okay.