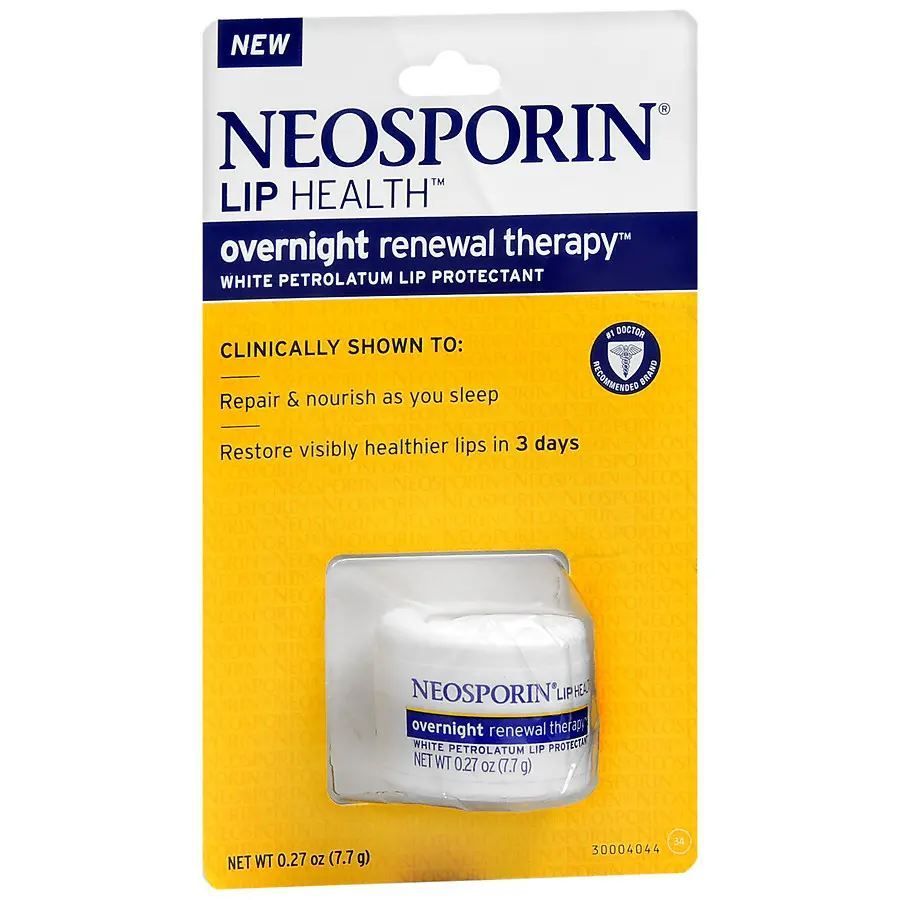 It's mostly vaseline and lanolin, but I like it. I usually use aquaphor. This works for me just a bit better. Aquaphor doesn't last all night. I still wake up with dry lips. This seems to last longer, as I wake up without cracked lips. It's very soothing. I have no issues with it, and that's a good thing in my book. It is supposed to sit on the lips a little to form a barrier, so don't expect it to sink in. The ingredients say there is flavor in this, but I don't taste or smell anything. It's worth a try. I will use and buy it again.

I don't have much to say about this product. It is thicker than vaseline. I dont feel like it soaks into my lips but rather sits on the surface. If you apply too much it leaves a white cast on the lips. Jatr is annoying to deal with. No scent or taste to speak of. I much prefer my Palmers cocoa butter stuck Cheap and effective

where has this been all my life! I was having huge problems with peeling and cracking lips and my go to Chapstick wasn't cutting it. bought this randomly and the next day everything was back to normal!! literally one night application and it restored my lips. I even put it on my nose cause it was peeling badly and the next day it's as though nothing had ever been dry. two downfalls: Im no longer satisfied with the results of any other product including my Chapstick that's meant for daily use. jar packaging always throws me off because it can collect bacteria although applying it at night in bed makes it more sanitary.

It worked really well for me for the first few weeks but then I guess my lips got used to it or something cuz I started waking up to dry lips with white peelies all over them. I think maybe I was started applying too much at once or something because initially it worked beautifully. Yes it makes your lips white but you use it at night anyway. I won't repurchase because I find aquaphor does a much better job for me. I'm disappointed that I'm stuck with a 3/4 full pot of the neosporin lip treatment now that I don't want anymore but it was maybe 5 dollars so it is ok.

I started using this because it's beloved counterpart (neosporin lip health daily hydration therapy SPF 15) was discontinued. Actually it's still listed on their site but I can't find anywhere and it's out of stock online besides ebay and amazon, for ridiculous prices. Anyways, this is ok. I much prefer the other one as it was creamier and more emollient, white petrolatum can be found in a lot of lip products and for that, I think it's just meh. It wears off really easily (I know your supposed to be sleeping) but I wake up with dry lips whereas with the other product I woke up with moist hydrated lips. Anyways, I wish they would bring the other one back, that was HG for me.

My HG lip balm! I suffered from dry and cracked lips this winter and nothing worked--even my trusty Rosebud's Salve. One application of this and the difference was like night and day. I will never go without this product again. In fact, I carry it everywhere with me and have ended up losing 2 pots. Repurchased both times so I wouldn't be without it. Yes, it does leave a whitish cast, but I usually use this as night treatment so that isn't a deal breaker for me.

Neosporin Lip Health Overnight Renewal Therapy is one of my favourite lip treatments & it's a HG product of mine. I picked this up at Walgreens for $5 or 6. When I had the mumps, I had the most swollen, dry, cracked, & painful lips you could imagine. I put it on before I went to sleep & like it says, it made the skin on my lips less dry. It took more than 3 days, but it worked regardless. I felt a difference right away, but I didn't see one. Remember though, I had the mumps & my lips were severely damaged. I'm not sure if anything else feels the same, but I found that this didn't really absorb into my lips - maybe I'm putting too much on? I feel like it just sits on my lips. I don't like the idea of sticking my finger into the jar over & over again, so I apply it with a Q-tip. Aside from being sick, when I apply this, my lips are completely moisturized, soft, & smooth - all overnight. It is a expensive for a 7.7 g jar, but it works & it's worth it! Update: I initially bought this because I was sick & now it's just a staple in my lip care; I put it on every single night before bed for the best lips

This product is awesome. I was applying balm every hour and nothing was working. This product hydrates and softens my lips. In the morning they are ready for the world. I would buy this again.

[Edit: Took a lippie off because I forgot that it makes my lips feel weird if I use if for more than three nights in a row. The best way for me to use this is to cake it on for a night or two, and then switch back to Burt's Bees Pomegranate, which for some reason is the only BB's lip stuff that does anything for me.] I love love LOVE this stuff. I had awfully chapped lips from weather and dehydration, to the point where I got angular cheilitis at the corners of my mouth. I had to treat that first, and then I tried 5 or 6 different chapsticks before I hit jackpot on this. Burt's Bees, Yes to Carrots, Aquaphor, and Carmex and Blistex pots - none of them did much at all for me. They would help, but only minimally. I picked this up at the drugstore after a couple weeks of nothing working, and the difference after one night was AMAZING. Much, much smoother, especially on the inner rim of my lips where I chap the worst. In three nights all of my chapping was gone - we're talking a shredded outer layer of skin, and worse where I would pick at it to the point of bleeding, all gone. I think it's the lanolin in it that really does it for me. Sure it has white petrolatum (basically vaseline), but other stuff I'd been trying did too. Lanolin isn't as common an ingredient in chapstick, although nursing mothers swear by it as a nipple cream. It's a nice solid little tub of product (about the same as a little medicated Blistex pot), but it's still a little pricey and you could probably find purer lanolin products for cheaper. I'm lazy, though, so if I ever happen to lose this, I'd repurchase. I probably won't ever run out of it, as it's not something I would put on except overnight. It has a very opaque whiteness to it that I personally don't like for daytime use, and you can kind of sheer it down but not really. I mean, if you like that light frosted look, go for it, but this washes out the color of my face. Other than that, it's a great product!

I've really been liking this product! I alternate balms all the time for bed, but lately this is the only one that really gets rid of my super chapped flute lips :P The little pot is kinda cute too. I like to store it next to my mini Vaseline tubs :) Only con is the white cast it leaves..what if you want to use it during the day?! Takes forever to blend the color out. Oh, and I'm not a fan of the scent either. I will continue to use though since it has actually proved to be capable of overnight miracles!