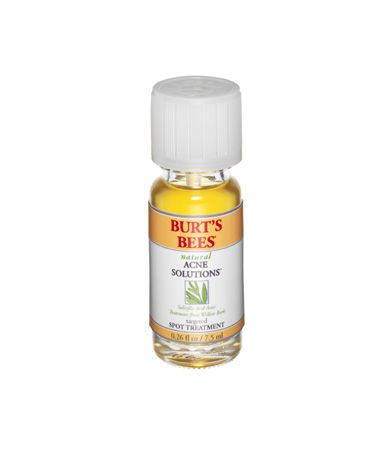 Heals acne overnight. Also helps with getting rid of red acne marks by peeling dead skin. Awful packaging tho and expensive for the amount you get! Still will repurchase

I purchased this product yesterday, this is my initial review. Will update with actual results. I have struggled with hormonal and stress breakouts my entire life and no actual products I have ever tried have REALLY fixed my problem. So I am not super optimistic but am always willing to try new products for a few months to see if I get any better results. VALUE: very expensive. You get 0.26 fl oz in the bottle, and I paid $16.99 for it (about $70.00 per fluid ounce). However, if it works and does what it says it can do, it's worth it to me. PACKAGING: I really love Burts Bees and their minimalist packaging, but this product doesn't really have any type of applicator. To apply, you turn it upside down onto your finger, a cotton swap, or cotton ball and then quickly apply to acne spots before it evaporates. I feel like I am wasting the product if I use a cotton ball, but I feel unsanitary using my finger. SCENT: has a very strong licorice/alcohol type scent. It does go away and dissipate as it dries. APPLICATION: applied it with my finger on acne blemishes. Warning to the sensitive: It does burn a lot. Burning is ok with me as long as it works. Afterwards, my finger felt &quot;tight&quot; and smooth which was nice because it's hard to tell how the product actually feels on your face when it's just on small acne spots. RESULTS: first application, I do see an almost immediate (few hours after application) reduction in redness and size of my (quite substantial) blemishes.

I have tried this after Burt's Bees tea tree blemish stick and must say that I prefer this Acne Solution treatment much better. I don't have acne, but I do suffer from occasional hormonal or stress break-outs, which usually last for weeks and it is very annoying. I was at CVS when I saw this spot treatment solution; it feels just like the blemish treatment except is a bit more concentrated. I am not sure whether or not it really helps someone with acne, but it did work magically for me and my stubborn break-outs. I actually find that you don't need to use a lot of it, before you get to see the results. Big fan now, highly recommend. For more info on this and other trendy skincare products check the link below, hope it helps! http://www.partyparrotblog.com/#!Current-Skincare-Routine-Favorites/cmbz/56cc93620cf26bd1d3eb941e

The only thing I've ever used that has truly reduced a zit (in every way) by the next day if used at night time. It really works for a targeted spot treatment!

It has only been a few days, but I had to write a review, because this stuff is VERY impressive. I noticed some great reviews and decided to give it a whirl, as I enjoy a few different products of Burt's Bees. I had pretty low hopes for this &quot;natural&quot; stuff to be effective on acne, as I usually slap harsher versions of salicylic acid gel on my trouble spots I get monthly. I swiped this on 4 active pimples and to my surprise, the next morning when I woke up they had all toned down in redness and swelling and literally went away within 36 hours. I was skeptical it was just good timing but I am very impressed. I find this stuff stings, but does not burn the skin and somehow manages to kill the pimple without harming the skin around it. I do find after not even a week I see the depletion in the product and I worry at how quickly I am going to be going through this. I haven't tried it as an all over the face treatment, but I may be tempted to use it as preventative and not just as a treatment for trouble spots. I do find it pretty expensive given how small of an amount you get, but we will see how long it lasts. I find this delivers well on its claims so far, and I love the ingredients.

I bought this stuff years ago, and I remember not being impressed with it, and then it sat there in my bathroom not being used. Fast forward-I had a stubborn, inflamed zit that I was desperate to get rid of. So I saw this still sitting in my bathroom, and decided to give it another shot. I previously just dabbed it on with my finger, and went about my day, and I didn't like the results. This time, I put some on a cotton ball and held it against my pimple for a few minutes, and that made quite the difference. You can feel it working with this technique, and now it has been my go to treatment. For me, it's no miracle worker, but it absolutely reduces redness and the size of the pimples. The smell is strong, but fortunately, I enjoy the smell. It's a product where you would need to play around and see how it works for you, application wise. It doesn't cause flakes or dryness, which is great for sensitive skin!

This product works really good. Got rid of my pimple in a couple of days. I get a lot of cystic acne and it takes longer to work on those but it does take away the spot and reduces redness gradually. The packaging sucks. It's hard to get it out. To avoid a lot of treatment coming out I usually have to put my finger over the opening and turn it upside down a few times to get a good amount for just one spot out. Other than that, I'd definitely buy it again. Probably look into the treatment that you can roll on so it would be easier. It's a lot better for your skin than BP spot treatments! Update: This product worked really good at first (it's been about a month) .. or I was just hoping it would because I really love Burt's Bees products. Unfortunately, I think this has been making my pimples even worse after a while of using it. I have a feeling it's causing me to break out more than usual. I'm discontinuing it today and I'll make another update if my pimples have healed and decreased.

I use this as a sal-acid exfoliator in my regime. I have large pores, oily skin, and tons of blackheads. I previously used Neutrogena's 3-in-1 Hydrating Acne Treatment, but it's very hard to get a hold of in stores, so when after doing a lot of research on here, beautypedia, amazon, ulta, sephora... I decided that this was 2nd best, so when I saw it on clearance ($3! a steal) at a local CVS, I snagged it. The product itself isn't horrible... tiny bottle not worth the full price though. I have large pores on my check bones, so I'll sometimes apply it to my cheek area and the alcohol content does sting my eyes a bit. There's not discernible horrible smell to it, but something that REALLY BOTHERED ME is the PACKING. IT'S ABSOLUTELY HORRIBLE. The opening is similar to the one found on a lot of toners, but with this bottle, the surface tension often clogs the tiny opening, so I would have to dab a few times for the product to come gushing out, often spilling some, which is really a waste, since it's such a small bottle to begin with. However, after using the entire bottle, I do have to say that it has shrunk, but it's not worth the hassle. Re-ordered the Neutrogena from Amazon (thank gosh for Prime frees shipping!)

I got this as a spot treatment for pimples and it is working well. I use it in combination withthe MUAC Blemish Clearing Gel to target problem areas. I like the following attributes of this product: 1. Does not make my skin really dry 2. Absorbs quickly 3. Diminishes pimples over night. 4. Prevents new pimples

It works. It really works. I got this as part of a &quot;grab bag&quot; from the Burt's Bees website. So pleasantly surprised to receive something that is awesome!! I even like the smell (it kind of reminds me of Necco wafers.) My only complaint would be the packaging. It's an open bottle, no dropper, no way to get just a drop. I use a Q-Tip, and it works 'okay' but I know I'm wasting product by having it absorb into the cotton. I will try using my finger but I doubt I'll get the same precise application. Other than that, I love it and how quickly it helps my pimples dry up and fade away!!