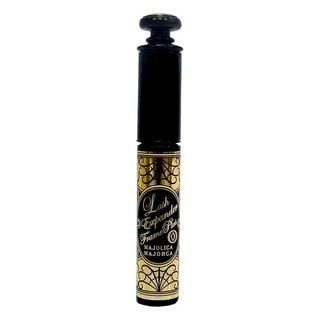 This is a bit of an overhyped product. If you have thin sparse lashes like me, you're going to have a tough time with this stuff. First coat is alright, but it is clearly not a buildable mascara because the sticky formula combined with the fibers can make a weird gloopy mess. Sticks my lashes together so it looks like I have less of them. I've tried combing straight through with the comb side, instead of my usual zig zag motion, and I still had to comb through it with a seperate lash comb. This is not the type of mascara you can put on in a jiffy. And after all that work, I let it dry, but some of the ends of my lashes end up looking bent and frayed after the drying time. I swear they didn't look like that when I freshly coated them. Bottom line is that it only looks good with one very natural looking coat. Any more, and it becomes a mess. And it never smudges. Something that I find is pretty rare when it comes to mascara. Holds a curl well, but frays the ends of my lashes. Prettiest packaging I've ever seen for a mascara though, I'll give it that.

I have very few, very straight and very meh eyelashes. I need to curl them beforehand before any mascara application. This mascara works really well in that it volumizes, lengthens and keeps a curl in the most natural way. In fact, its because of the fact that it makes my lashes look gorgeous without looking like they have makeup on that I like it so much. Also the packaging is pretty darn adorable. I'm really low-maintenance so I do like one coat and its perfectly fine. I'm still not sure if I like this mascara more than the CoverGirl LashBlast (waterproof). I know that the Majolica Majorca makes it look more natural, as I said before, whereas the CG one makes my lashes look thicker and dramatic. Oh and because I need a mascara that holds onto my lashes like an overly-clingy boyfriend, I do need to use baby oil to remove it.

I was so excited to try this mascara...then I got it and hate it. It seems like such a good idea: mascara with fibers in the formula that you can actually SEE which &quot;should&quot; build up your own natural lashes. I have lashes of varying lengths, from years of abuse with falsies and extensions. I figured this product would add the volume I seek which creates the illusion of having a completely full, lush lash frame around my eyes (I have a few other formulas that come pretty close, and several that do, when combined together.) This did NOTHING of the sort. It went on much wetter than I thought it would and coated my lashes with a thin, shiny black coating that made it look like I had about 5 good lashes on each eye. 5 really long, un-voluminous lashes. The look was so bad I kind of freaked out, because this stuff is longwear, and &quot;starting over&quot; during my morning rush to get out the door when I have longwear mascara stuck on my eyes that looks like cr*p is not the way to start the day. Apparently, all the hype about &quot;expander&quot; is in regards to length and not volume. I think the term &quot;expand,&quot; at least in mascara terms, typically refers to volume and not length, so maybe they need to re-think the name of this product, because it added no volume to my fringe whatsoever. I bought this product on Amazon, and I admit I was hesitant, because it was apparent I was not buying it from a state-side vendor. In addition to being afraid of being ripped off, this stuff is ungodly expensive. My level of disappointment is pretty unquantifiable. I have several drugstore mascaras that perform better.

Got this because of the positive reviews. Sad to say, it did not live up with my expectations. The formula is too watery. Made my lashes wispy that it looks like im sick. But it is very waterproof! If you need a mascara that you can wear while swimming, this is the one.

I have a hate and love relationship with this mascara. I have fine lashes that curl downwards and this mascara gave great length to them. I love how it doesn't clump and it looks absolutely amazing on my bottom eyelashes. However, I have such oily skin that I have panda eyes after a few hours of wear. The price and availability isn't very appealing either. Unfortunately, I will still be on the search for my HG mascara.

So far, favourite mascara! It holds my lash curl perfectly and adds length. Lasting power is also admirable. Even when I wear glasses and my lashes are constantly rubbing up against my glasses, none of it smudges or comes off (dried super fast) throughout the day, my lashes stayed curled, and all the fibres stayed put. Of course, the comes hand-in-hand with being difficult to remove, but if you warm it with some warm water first then use an oil-base makeup remover, it comes off decently easily. I agree that it doesn't give much volume, but I don't mind that. I'm already super impressed by the curl hold, length enhancing, and lasting power. Not to mention that it has never clumped for me, even if I put many layers.

This is my HG mascara. Before I found this, I couldn't even believe I'd find a real waterproof mascara that wouldn't make me look like a panda at the end of the day and which actually holds the curl for my short Asian lashes. This certainly does the job, and lengthens as promised. However, it does not add volume so I usually combine it with other mascara which I coat with this for waterproof effect. I am now comfortable to wear mascara when I go out. And oh, to remove you do need a good make up cleaner. I just use Simple kind to cleansing facial wipes, the one that says can remove waterproof mascara. It's easy so don't be intimidated by how difficult some people say it is to remove this mascara.

I would buy this again is an understatement cause Ive been through a dozen of this. I receive practicallh every new makeup product out there and nothing lengthens, curls, AND holds my straight, short lashes than this EVER. It's amazing how cheap this is too. Would totally pay more!

I wish they would sell this mascara in stores here in the US! It is the best ever made. No clumping, no transfer, totally waterproof and makes lashes look totally natural but longer and darker. Nothing in the US can quite compare to this and I have tried plenty over the years.

This is an amazing mascara. I have sensitive eyes that water constantly during hayfever season and eye makeup is typically a problem. This mascara does not run or smudge even when I rub my eyes or go swimming. This holds a curl fantastically, my lashes are quite straight and short and this mascara transforms them. You need to use a waterproof eye makeup remover to get this off.