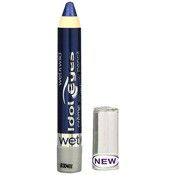 This taught me that if something is on clearance, it's probably there for a reason. Patchy, greasy, creasy, impossible to work with even as a base. It's just worthless. Paid: ~$1.50? $1? Wasted: All of it.

Don't even bother with this product. WetnWild really, really needs to up their game on chubby eye pencils.

Save your spare change from wasting it on this. Worst pencil ever! It creases like crazy on its own. Over a primer I felt like it still moved around quite a bit and just felt like cheap grease paint.

I am reviewing this product without using eyelid primer neither setting it with a shadow. The color is beautiful, but the application is horrible!! Is like applying the product with oily makeup remover at the same time. Super runny, even after a while after it is applied.

Pretty color, but frostier than I'd expected. Didn't go on smoothly at all for me; I had to drag it across my lid.

Beautiful color but it applies so unevenly; I need to use my fingers to blend it really smooth. Also, this shadow has minimal staying time even when used with primer. I applied it over UD primer potion (a known performer), and in only four hours it was worn and creased. No value for your money with this product.

I agree with other reviewers about how it's not comparable to NYX's Jumbo Sticks but it does have another use for me. I use it under red lipsticks to give a bluer tone complement my skin.

I bought this pencil, along with the shade Pixie, at CVS for 99 cents. I was just browsing and thought these looked decent and for $1 I didn't have much to lose. While this product isn't bad, I don't find that there is anything that it does exceedingly well. Distress is a really pretty color. I'd describe it as a shimmery navy-cobalt blue color, if that makes sense. It has a nice shine to it, but thankfully it's not glittery. It's definitely creamy -- it glides on super smoothly and deposits color evenly. I also like that this really brings out the green in my green-blue eyes. I planned on using this most as a liner, but the packaging prevents me from doing so very easily. Unlike with many jumbo cream pencils, you can actually sharpen this to a pretty fine point. But the cap isn't long enough to cover this if the point is too high. If you sharpen this to a point and then put the cap on, it will squish the point down and make it flat. You can still use this as a liner, but you're just going to have to deal with having a thicker line since this won't keep a thin point. I've also just brushed a liner brush onto the product and then lined my eyes with it. This works well, but it's not always an extra step I want to add. Alone as a liner, this actually surprisingly lasts a full day with minimal migrating and smudging. I wore this alone the other day (over a primer, of course) and I only had to rub a tiny bit off my upper lashline that had migrated upwards, and I only had to rub some that had smudged on my lower lashline a few times during the day. For the cheap price, I can definitely handle a few minor touch-ups throughout the day. Don't expect this to stay on your waterline though...It'll be gone in less than an hour. This does work pretty well as a base, but it's not often that I need a bright blue shadow base. This never really completely dries, though. It doesn't rub all over the place when you blend shadows over it, but since it still feels gel-like once it's set, it feels a little funky blending on it. But if you're doing a super blue look on your eyes, this will increase the vibrancy. My biggest gripe with this is the packaging. The cap is made of super thin, cheap plastic...drop it once and it's shattered to bits. I had to toss Pixie because once the cap broke I couldn't figure out a way to store this without it drying out. The lid to this shade broke yesterday, so I might end up throwing it out too. Sucks, but for only a dollar I'm not too bummed. It was nice to have this, but I think I'll be trying out NYX Jumbo Eye Pencils before coming back to these.

Beautiful color, but terrible product. I thought this would be comparable to NYX Jumbo Eye Pencils, but it's nowhere close. The NYX pencils are more waxy, so they last longer and powder eyeshadow sticks to them perfectly, so they are a great base. I was hoping to use this product the same way, but it's the worst makeup product I have ever purchased hands down. Even with a good eyeshadow primer it couldn't be helped. Eyeshadow on top didn't stick at all.

I agree with a previous reviewer that these don't set, but they aren't meant to set. Like the NYX JEP's they are creamy and a bit greasy, and set beautifully if applied sparingly, a thin layer, w/ a shadow placed over them. My faves are the dark blue and gunmetal shades, which are great bases for a smokey eye, and will enhance any deep, smokey shadow you place on top. They are no more &quot;greasy&quot; than the NYX JEP's.And, except for one of the pencils, they are every bit as pigmented. There aren't as many to choose from, and all of them have a slightly metallic finish (which I really like), as compared to the JEP's. These pencil shadows are well worth trying, IMO. They are accessible and very affordable, so what have you got to lose?