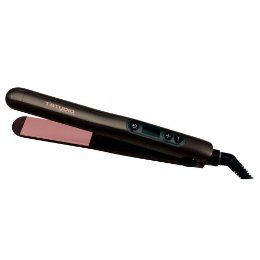 I so wanted to love this--it seemed like the perfect-for-travel dual voltage flatiron with rounded edges for creating both straight and curled styles. Alas, a huge fail for me. I ordered this directly from the Remington site after emailing them with questions about which straightener was best for my hair type. [I have fine, thin, silky, mostly straight hair that also likes to frizz, bend and misbehave.] Have to say, their customer service was excellent. My experience using the flat iron however was a lot less stellar. The package was missing it's instructional DVD but I figured with all the youtube tutorials out there, surely I'd get the hang of it. If only it were that easy. The only &quot;pros&quot; I can think of are the features I mentioned up-front; it's light-weight, dual-voltage and apparently shuts itself off after an hour if you forget to. It's also very affordable. But using it as a straightener was frustrating to say the least; my hair repeatedly got caught in the side seams and would tear during use [others had mentioned this in the online reviews I'd read.] In addition, the smooth ceramic plates didn't seem to grip my hair tight enough to actually straighten it, so I'd end up going over the same sections again and again; hardly ideal. Lastly, maybe it's just me but I couldn't get this to give me any sort of curl or wave whatsoever, even after watching some very talented youtubers achieve great looks with the same iron. Sent it back today, paid for shipping both ways and have learned my lesson about ordering online.

I am seriously disappointed in this tool. I was looking for an iron that would double as a flat iron and a curling iron. This isn't it. Maybe it works for people with fine hair... but mine is hardly coarse, I'd say medium, and this thing won't even touch it. It doesn't straighten well, and the curls are nowhere near tight. On top of that, they fall by the time you're done the next one. I'm returning this ASAP.

I've had this a few days now, and I'm really impressed. This flat iron smooths beautifully, no tugging or pulling on my hair, and the end results are shiny and healthy with no flyaways. My results are equal to what my stylist achieves with a Rusk flat iron that costs a whole lot more.

Rips my hair out...too easy to burn yourslef, and ironically too easy to turn off and you don;t really notice till it;s not working at all. But seriously, i think the plates have shifted because the hir pulling thing got worse and worse. I had to toss it! Only gets a 2 beause it's so darn cheap.

I have had this flat iron since December and I really like it, but I am usually the one to like products that not many others do. When I first used it, it was hard to get used to not putting your fingers on the top part because it gets so hot and not being able to put them down to low otherwise you would be pressing the buttons to change the temp. At first it felt like it wasnt gripping my hair at all but just slidding right through, but I dont have very thick hair so I just used bigger chunks and it works fine. I dont use it to curl my hair because I havent had long hair long enough to curl it but I used it on my sister who has paper thin hair that wont hold a curl and it worked just fine. I even dropped the tip of my straightner in water and I thought for sure it was dead, but it still works.Right now my hair is chin lenght in the front and way shorter in the back to be spiked up, so I really dont have much hair to straighten but I use this flat iron to give my hair some volume at top and its size is perfect for creating that volume without teasing it. So overall I think this is a good flat iron and it works well for me!

So, after coming to the conclusion that my 3-year-old Conair Infiniti was past it's time, I spent my whole morning researching endless reviews of straighteners from Revlon to Conair and Remington to Chi. I finally settled on Remington, and it was a tie between Sleek and Curl and Professional Tourmaline Titanium Ceramic irons. They both were almost identical (if not exactly the same), so I went with Sleek and Curl not only because it was cheaper ($34.99 at Target), but the adorable and unique design (sleek brown iron with rosey pink plates). I thought my Infiniti was a great iron, until I tried this. First off I must say, I LOVE that there is an indicator light to let you know when the iron is at it's correct temperature. My Infiniti didn't have that, so it was a guessing game. This iron has an LED light that flashes blue until it's hot enough, then is supposed to stop flashing. The one I bought didn't do that, so I exchanged it and this one doesn't either. Maybe I''m doing something wrong, but I believe the temperature is stable after about 45 seconds. The lock feature is a must, because you WILL hit the buttons and you WILL get mad when you do. It's easy as pie though, just hold the &quot;-&quot; button down for two seconds and it's locked. Then you can go on about your straightening ways. I ironed my hair earlier with the Infiniti, pulled it back during work, and tried out my new iron when I got home. It glides through my hair and tames all the itty bitty stray hairs left from the Infiniti snagging my hair. It added a bit of shine, something no other iron I've used could do. My hair looked and felt so smooth and tamed, I couldn't believe it. It didn't snag or yank my hair anywhere, and the plates offered a great grip on each section of hair. The only thing that made me a little frustrated with this was that after using the iron to curl a section of my hair, I went over it again to straighten it and I couldn't get it straight for the life of me. However, that's a small quarrel to have with such an excellent iron. Edit: I ended up returning this iron a few weeks after buying it. As I said before, the LED light is supposed to stop flashing when it reaches the assigned temperatue, and mine never did (even the second one I bought). That lead me to believe that the temperatue never reached what it was supposed to. Some days it felt hotter than others, which was annoying. I have very thick, long, and wavy hair. Unless the iron is reaches the max temperatue, it doesn't really work. Then, to make matters worse, even after straightening my hair, it wouldn't hold. Every day it would end up curling at the ends instead of staying straight. With my Infiniti that never happened. I could straighten my hair with that, sleep on it, and it'd still be straight the next morning. I think I was trying to convince myself my Infiniti didn't work so I had a reason to buy a new straigtener, because after using it again my hair looked (and stayed) great.

Bought this because I got my hair cut and my 2&quot; Hot Tools just wasn't cutting it any more. I bought it based on good reviews here and on Youtube. Got it at Target for ~$37, and it came in the most PITA box I have ever had to open. I think the plastic cut my hand twice as i was pulling it open. The CD was pretty cool, and showed interesting things you can do with it, but those looks require a lot of patience, and in all likelihood, someone to do it for you. First problem I noticed, the plates didn't hit quite right. They gapped at the top. And it was noticable when I ran it through my hair since it wouldn't grip and wouldn't flatten. Returned that one. Got a different one, and these plates fit together. Flattened pretty well. Curled really well...but i kept hitting the buttons and that was super annoying (i knew how to lock it and everything, but still, i kept pushing on them) Then I noticed that the plates stopped hitting again, and was gapping again...dunno what happens as it heats up or cools down that does this, but it seems to happen again and again. And, over the course of 4 weeks, my hair dried out like nothing else. So I gave up and returned (90 day return policy!) and got something else :P

Recently, I just bought this straightener and it works great. It heats up much more quicker than my old straightener (some cheap Vidal Sassoon straightener that barely heated up). It also gets pretty hot too, but I try to not put it at the max. temperature because my hair is bit damaged. You should watch out though because you can burn your fingers. The only thing I did not like about the Sleek and Curl is where they put the on and off buttons. :( EDIT: After trying out my friend's Babyliss straightener, I can say that this one makes my hair feel kinky and dry compared to the Babyliss straightener where my hair felt very soft and healthy. And yes, I always use hair protectant. So I would recommend splurging for a better quality straightener.

After my cheapy Revlon straightener died I replaced it with this one choosing it mostly based on it's pretty colors (a brown/burgundy body with pink shimmery plates) and it's relatively inexpensive price of $35. I laughed when I saw that it came with a how-to DVD but I loved that it came with a 4-year warranty. I am actually keeping all the paperwork and receipts needed for this because my last one just exploded in my hands. Annoying! I started to use it and was pretty amazed by the shine it gave my hair (though that could be the Lush Henna bar I used last week). I was a bit annoyed that the outside of the iron was getting pretty hot, I kept sort of burning my fingers. It's also really easy to hit the buttons on the side while you're straightening. That's when I finally decided to watch the DVD. Holy crap, I learned a lot. I learned how to lock the buttons and how to CURL my hair with the straightener. This explains the outside of the body getting hot--duh, it's supposed to be put to work! The methods shown were totally new to me and were similar to curling gift ribbon with scissors. You put the hair in the straightener, turn it 180 degrees and just drag it through to the ends. Voila, awesome curls! These aren't the prissy ringlets I get from a curling iron, they're interesting waves. I am now totally in love with the product. If I have the same issues others have I will definitely be using my warranty for a replacement.

I used it for a week. I noticed that it was taking longer to heat up and sometimes when I try to turn it on it wouldn't work. I know it isn't the outlet since my hairdryer worked fine. So I tried it the other day and it just didn't turn on anymore. So I went back to using my FHI. I noticed that after using my FHI again that the sleek and curl was starting to dry my ends out. Hmm.. oh well.