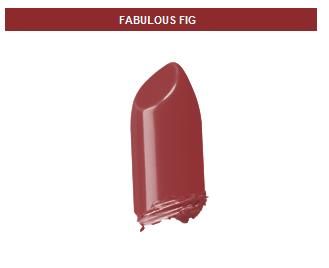 I just bought this lipstick today. And i am so blessed to get it! At first, i was just hanging around at revlon store with no intention to buy anything. And then, i looked at the SL matte lipstick shade mauve it over. The color looks good but when i tried to apply it on my lips, it's too pale for me. So, the BA came and asked if i want to look at a-browny-red shade. She gave me this. And i'm in love at the first sight with this fabulous fig shade!!!!! I don't know how to describe this lipstick. Its just soooo amazing. I can wear it at day and night. I think this color is more like dark terracotta. Or maybe i'm guessing wrong because i am not a color expert lol. Idc. All i know is, I am so madly in love with this lipstick

Love this color! It works very well with my skin tone, which is somewhere between NC 37-40. Not drying, leaves a nice stain on the lips, and has no taste or scent. Edit: Can be slightly drying when used consistently. Best to apply balm and blot off excess before applying lipstick. It's important to blot beforehand to keep the lipstick from slipping.

I'm NW25 and I have trouble wearing intense lip colour. I love wearing bright/intense eye make up but for some reason intense lip colour can have a tendency to look clown-like on me. This may not be a true "red" but this the perfect "red-ish" colour for me. I find this lipstick drying so I layer lip balm with it. (Burt's Bees Tinted Lip Balm in Red Dahlia works well for me). Even though it is drying, I'm very impressed that it doesn't flake too much. I don't wear intense lip colour often so this has lasted me a long time. If I run out, I will likely repurchase if it's still available.

This was my first Matte lipstick and i absolutely love this shade! the texture of this lipstick is creamy and easy to apply, altho i do have to put on vaseline before applying this lipstick. This is my go to lipstick for daytime. i also got really red and it is the EXACT dupe for mac's russian red. I love using that for night time. Overall, It is a great matte lipstick for BND$15.90. Will definitely repurchase and get more shades!

Albeit very drying, I am willing to overlook that and crown this my favourite lipstick! At SG$13.90 a pop. this goes fantastically with all skin tones so I can't see how you can go wrong with this. Only con is just the lack of moisture - I'll always take note to brush my lips lightly and put some chapstick/balm before putting it on to avoid any 'uneveness' and to minimize it sinking into my fine lines. Other than that I am madly in love with this - there was a time I thought I lost it so I got really depressed and did not get dressed for the next few minutes and it wasn't until I told myself that I could drop by the drugstore after work to grab a tube before I got my act together. And if you're wondering no, I didn't lose it, it just rolled under my bed and also, I picked up Wine Not instead and also in love with that shade! Hallelujah Revlon!

I freakin' love this lipstick. I have quite pigmented lips and on me it is a deep deep brown dark red, that is a little vampy on my pale skin tone but I must say I love it. It is a very dramatic lipstick, I'm not really into bright red lipsticks as they don't really suit me so this is perfect. I love matte lipsticks as I hate shiny lips so this is the perfect pop of colour without shine or lustre. I mostly wear it for nights out and if I was more daring I'd wear it in the daytime. The texture is really nice, not drying, goes on evenly and has good staying power (especially as it is matte). It lasts a lot longer than the MAC mattene L/S. For such a cheap lipstick I am really impressed. I also like the fact that when it fades, it fades evenly leaving a tint on your lips so you don't have to constantly keep checking your lips to top up. Would definitely repurchase this as long as it isn't disc.

I'm in the not sure department concerning this color. It strayed off into a little too terracotta for me. Not orangey exactly, but slightly more warm on me than neutral. It also is a little brighter than I'm used to dealing with. The name is a little misleading because I've always thought fig to be more like a raisin color more in the burgundy tones. But, this is a mid tone red with some brown and a touch of coral. Because reds are hard to photograph, none of the swatches above come close to capturing it accurately. I did find someone's flickr photo and this is it: http://www.flickr.com/photos/36924584@N00/4556064017/ However, even that photo looks a bit more coral than it actually is. Picture that and make it a little darker and a little less orange. It's not rosey, plummy, berry or anything else people have explained it as. At least, not on me! But, I may have found a red I can actually wear because most reds turn a dreaded fuchsia on me. Now, I just need to get used to it! I think a trick to making this more wearable is to make sure you've balanced out the color in your face making sure not to wear plummy or too colorful eyeshadows. Try using gold or golden beige eyeshadow and a neutral blush and I think this lipstick will really look nice for winter.

I completely ignored this shade for so long. Since some fabulous matte shades have been discontinued, I decided to look over the range again to see if I missed any gems. I don't care for the new matte shades that are so hot pink or pale. It's quite a unique shade in the drugstore or high end lipsticks. It goes on like velvet soft and can be layered for more intensity. Certain shades in the matte's just go on my lips so well. Mauve It Over, Really Red, In The Red, Fabulous Fig, and Strawberry Suede. I have Nude Attitude and Smoked Peach, too. While I like the peach shade, it goes on sketchy and drags. Which causes the lipstick to gather in certain places and not be even. Fabulous Fig goes on evenly and lasts forever. I don't use a lip liner with it. I'd describe this as a reddish plum with some natural brown to it. It just depends on your lip tone. On me it can be a rosey neutral brown. If I layer it more then it becomes a rosey plum. I'm sure some people would describe it as burgundy if they have very pigmented lips.

I liked the formula and the way it had a decent amount of pigment but the color did not work on me at all. It ended up looking way orange and not nearly as pink / red as it did in some swatches I saw online. I would buy this formula again if they had a color that worked on me.

I'm giving this a good rating because it seems like a quality product that goes on smooth and lasts, but the color itself looks horrible on me. It appears a cool, brownish plum in the tube, but looks dark and drab against my skin. I imagine this would look stunning on someone who is very pale, but against my light-medium olive skin, it reminds me of the drab 90s browns that *everyone* wore, no matter what her skin tone. I will stick to the brighter or richer, truer shades in the line.