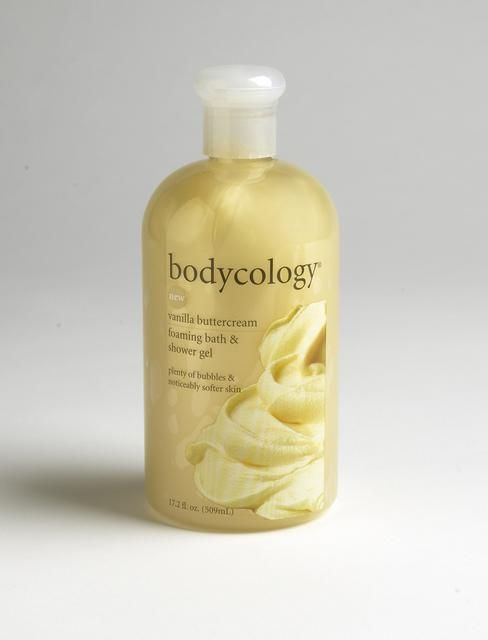 This review is for the older Bodycology bath and shower gel. I believe that there is newer packaging and possibly a newer formula. Oh, I love this product so much! This was my first Bodycology product ever and I'm very impressed with it. :) Price: Differs from store-to-store (as most druggie finds). I bought this from a little drugstore for around it's normal internet-retail price. Packaging: I really like the packaging of this. It's simple and minimal but it looks a lot like the Philosophy shower gels. THIS SMELLS AH-MAZINGGG. I cannot express my love for this. It smells like icing on cupcakes. This also lathers up very well and you only need a dime-size amount on your loofa for it to foam up and be enough. Conclusion: Go and buy this right now. I'm not sure how good or improved the new formula is but this is a must-have for those who cannot afford the Philosophy shower gels.

I went to Shoppers this evening to buy some bubble bath for my jacuzzi tub. I saw this&realized that it was reasonably priced and it was a decent size bottle so I went for it and bought it. I heard plenty of good reviews about Bodycology products. But wow,was I ever disappointed when I got this home and used it. I ran the water, turned on the jets and poured in about 1/3 of the bottle to get a decent amount of bubbles. That was the first thing that upset me, I thought that the bottle would last me a long time considering I hardly have bathes but after using a third for just ONE use I was not impressed. Then when I got in the tub I started slipping and sliding all over the place. This has never happened to me before. &when I felt my body it felt so almost slimy, so needless to say I was NOT impressed with that. THEN when I was getting out of the tub because of the product that was on the floor of my tub I almost broke my leg trying to get out! I loved the smell, and the smell is lasting long on my body. But I am not impressed with this product. But I won't let it discourage me from buying other Bodycology products, just not the foaming bath&shower gel.

I don't like the way this feels on my skin. It smelled a little cheap when I used it for the first time. I was looking for something that was similar to bath and body works shower gel. This product didn't moisturize my skin... nor did the scent stay.

LOTS, AND LOTS of Bubbles is what you get with this product. It doesnt smell great from the bottle, but as soon as you pore some on your wash cloth..WOW! instant hunger arrives. I deff. love this product and cant get enough. I'm always loving the body spray.

Love this shower gel. I must admit that the scent doesnt smell to good from the bottle but when you use it in the shower it smells just like a vanilla cupcake. This product has lots of bubbles and makes you feel very clean afterwards. Way better then lush in my opinion.

I loved the scent of this when I smelled it in the bottle at the store, but for some reason, there's something about it when I got it home and in the shower that smells faintly like feet. It fades, but it's there. It's not the deliciously edible kind of scent I first thought before using it, so I won't be repurchasing. As far as the body wash itself, though, it lathers nicely, doesn't react badly with my skin, and you get a large bottle for a small price. Scent is such a personal thing, so if you like vanilla/frosting scents, I'd at least give this a try. Maybe whatever note I'm detecting won't smell as sour to you!

Great product for a great value! I picked this up at Long's drugstore on sale for $3.99. You get a really big bottle and it smells great! My fiancee purchased the Jaqua Pink Buttercream set for me last Christmas for over $50. The skimpy body wash alone is worth almost $20. You get 5x more product with Bodycology for a fraction of the price and it feels and smells EXACTLY the same.