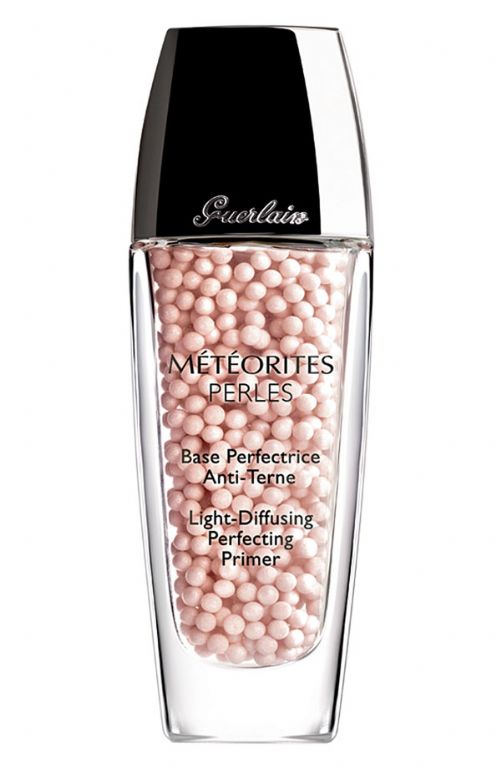 What a waste of money. I just don't get it. Complete nonsense. Returned this after a week of using it. If you want to spend $75 on basically fragrance, alcohol , glycerin and one silicone for your face and fool yourself into thinking that it works, go ahead. Guerlain will love you for it and give you nothing in return. Just an FYI - any ingredient after the preservative does not have to be listed in order and will make up less than 1% of the product, so you're paying $75 for WATER, GLYCERIN, SILICONE AND PRESERVATIVE. Wake up people!!! Don't listen to these a-hole beauty gurus that know nothing about chemistry, but play one on TV. Take note when their makeup comes off and they have a ton of sun damage acne and discoloration, or a filter on their camera, like Tati and Kathleen Lights. Ingredients: AQUA (WATER) • GLYCERIN • CYCLOPENTASILOXANE • PHENOXYETHANOL • SILICA • HYDROXYETHYLCELLULOSE • ALCOHOL • SYNTHETIC FLUORPHLOGOPITE • BUTYLENE GLYCOL • CETEARYL ISONONANOATE • ALGIN • GELLAN GUM • DIMETHICONE/VINYL DIMETHICONE CROSSPOLYMER • PROPYLENE GLYCOL ALGINATE • CALCIUM CHLORIDE • ACRYLATES/C10-30 ALKYL ACRYLATE CROSSPOLYMER • PARFUM (FRAGRANCE) • DISODIUM EDTA • SODIUM HYDROXIDE • POLYMETHYLSILSESQUIOXANE • TIN OXIDE • ALPHA-ISOMETHYL IONONE • BENZYL BENZOATE • DIAMOND POWDER • TOCOPHEROL • BHT • [+/- MICA • CI 77891 (TITANIUM DIOXIDE) • CI 77491, CI 77492, CI 77499 (IRON OXIDES) • CI 19140 (YELLOW 5 LAKE) • CI 42090 (BLUE 1 LAKE)]

ETA: ETA: I've used this primer for over half the month - and I'm in love. So much, that I hunted down the full version and have purchased it. I'm not sure what this does, but for my oily/shiny skin - this stuff makes a definite difference in my shine control while wearing foundation. I love it. No breakouts either - and I have very sensitive skin. Only thing I'm concerned about is making sure I get all the product out of the bottle. I guess some folks had issues, but I'm prepared to bust it open if I need to! Highly recommend this primer if you have oily skin. I used to use NYX's Studio finish primer (clear) that is the Smashbox dupe - but I can tell now that my skin prefers water-based primers vs. silicone-based. What a HUGE difference. If you aren't sure, never hurts to try a different product! (or even a sample like I did.) ---------------------------- I believe they repackaged this into a new white bottle - formula is the same, but just a new look (white cap) which is here: https://www.makeupalley.com/product/showreview.asp/ItemId=185285 My review for both is the same - I used this for the first time today on my face (have a sample) and I wasn't sure how much I'd need to use - I think I will use a bit more tomorrow - but the little that I did apply to my face - WOW. I wasn't sure this would do anything as I applied it and rubbed it onto my face, since it was very serum-like - and lotion-like? It absorbed immediately - you do not get a silicone-y feeling with this stuff. GLITTER. LOTS OF GLITTER SPARKLES ON THE FACE. The MAC primer does the same thing. I let it dry a bit and then applied my foundation etc.. like I normally do. I didn't notice any more &quot;glow&quot; to my face at all. However, once at work - I noticed right away after 4 hours - and not needing to blot - that this stuff DOES DO SOMETHING. I'm using the same face products I normally do - but this holds back my oils well. Enough that I only feel the want to blot after it being on from 7AM to 11AM. Normally, I'm blotting by like, 9AM. So again, this does do something. It may not seem like it, but it does. My nose gets oily right away - but that happens with EVERYTHING. Not sure if I'd repurchase the full (I have a sample) but I heard the new Smashbox primerizer gives the same feel and oil control as this - so I may try that first before splurging on this full price (or I'll find another cheaper sample.) This does work with oily skin! ETA: Post washing my makeup off-- my skin was super soft! This stuff (unless it breaks me out) is great!!!! This would be 5 lippies if the price wasn't so high.

This is quite nice. I have a few samples of this product. The first few times I used it, I was not impressed. The first time I used it under CC cream, the second time under foundation. It made zero difference. The third time, I tried a different method, I mixed this primer with my CC Cream (Bourjois 1,2,3 cc cream) on my palm, and then applied the mixture on my face. Then I knew what the fuss was about. It makes my skin look so glowy and pretty...I usually get a few dry patches, they barely show up with this. I also notice that my make-up looked good through out the day even though it was a warm day. Really like it! I don't really use primer though, so I'm curious if something cheaper could give me the same result. Not sure if I will purchase or not. I'll use up my samples and test a few drugstore primers before I decide if this one is worth splurging on. UPDATE: So I prefer Guerlain's L'Or Radiance primer to this one. this Meteorites primer, like the balls, have a tendency to make me look ashy under certain lighting, I discovered this the more I wore it, the L'Or Radiance otoh is flawless and perfect in every way.

I saw someone in YouTube try it and I went -meh- but I was wrong. I was walking through the Guerlain counter, mostly waiting for my mom to be done shopping, and I recognized the primer from that video and a lady asked if I wanted to try it out, and well, I did. I left without it that day, and returned the next in the morning to buy it, here's why: First Impression? She put some in her hand and... My eyes formed stars. (I have kinda oily skin but I have a little bit of everything, so I thought I should stay away for the glittery things but, guys it's so beautiful). After she put on it felt a kinda tacky, and I was practically ready to be grossed out but, in a matter of seconds it became velvety smooth. But will it make me look shiny? All the glitter you can see in the pearl itself it's evenly distributed once applied to the face, it's like you have a glow from within. You can wear it alone if you want, it look beautiful, it's like a youthful glow. Will it make my makeup last? Yep. Today for example, I was running through my college's campus with a crowd surrounding me, I was very hot a sweaty but my makeup stayed on my face flawlessly, when I certainly didn't felt like it. Why is so damn expensive? Think it like this, you need just one single pump to cover your entire face, so yeah it's very pricey, but it will last ages (have you seen the amount of pearls it has?) in my opinion it's a good investement. And let's be honest, everything of Guerlain is damn expensive. Is it travel friendly? Certainly not, it is kinda bulky and tall for a practical carrying, but at least you are getting a lot from your money's worth. Does it have a scent? Yep, it has that typically Météorites fragrance to it, if you own any highlighter from the line you know what I'm talking about. But it's very pleasant. Do I actually need it? Probably not, but it's a luxury worth it's price, it makes me happy, it works and the primer and I are now best friend, the bond has been made, there's not going back now.

i have a really dry skin. and this rpimer could help you to get ready for a day.. use it before all the foundation and stuff, and your make up will last until the party ended. + the cream is so thick but not sticky + smells nice + suitable for a dry skin + beautyfull packaging - the packaging is from glass, you cant bring it for gym - the price is a bit high - for oily skin, becarefull you'll get more worst.

this thing is not worth over 60 euro and it does not even prime your skin, maybe if your skin is perfect and really doesnt even need anything this may be good for you

This is my perfect spring/summertime primer. Light, not too greasy and not too shimmery. I hate the feel of too much silicones on my skin, and that tends to break me out, so I'm very happy with this primer by Guerlain. It's texture is thin and somewhat runny, it comes out the pump a little bit separated, you mix it on your fingers/brush and apply it to your face. It doesn't leave a oily sheen, just a slightly blurred and polished version of your skin. I use either a BB cream/TM or a light to medium foundation (YSL Le Teinte Eclat) on top, but I can see why people wearing medium to full coverage aren't in love with this, the effect would be gone. Bit on the expensive side, but I'm not sure how long this would last me, so it all depends on that if it's worth it or not. For now I say I will rebuy.

gave my skin an amazing dewy finish no matter what foundation i used. unfortunately, didn't seem to do much for the longevity of my makeup. and for that price, if it's not going above and beyond, it's not worth it.

I really like this primer it really does make my makeup stay, and even if I just wear it alone, my skin looks beautiful. not until I work this did I get the compliment that I looked like I was glowing from the inside. only downside really is the price. it's very expensive. I don't know if being told I look like I'm glowing is worth 75$, but we'll see.

I use this primer together with Guerlain BB cream and Meteorites pearl for the best result. I reliase if i put on heavier coverage foundation on top of this primer, the glow will dissappear. So i use either light bb cream or foundation, then put on the meteorites pearl so i have this glow on the skin look.