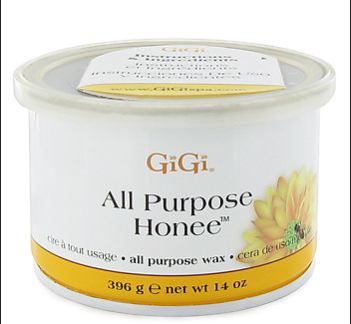 I bought this wax to use on my fine to medium hairs on my arms and legs It took about 30minutes to warm up in my gigi wax warmer on a low setting. When using the wax on my legs it spread very easily and I was able to use the same wax strip about 8 times when reapplying the wax. It pulls out all of my hairs and I don't need to reapply it to the same areas but if I had to I think my skin could handle it twice. My only problem with this product was that it was rather harsh to pull off but the soreness on my skin didn't last very long. I don't think I would use it on my face and it's definitely not suitable for underarms or the bikini area. I have since found a wax I prefer but if I had to I would purchase again

This product really works on the first try. I have been using nads strip wax for a long time but I would have to continuously redo the same spots just to get coarser hair to come off. This left my skin completely irritated because of the constant ripping of the strip. After a month of researching, I decided to buy the Gigi all purpose honee wax kit at my local Sally's. I was really hesitate about the negative feedback but I decided to give it a try. I'm glad I did. Got everything off on the first pull and I didn't have to go over it like the nads strips. I would give this Five lippies but this product can make a mess if you aren't extremely careful. The applicators and muslin strips and applicators are supposed to be reusable per the sales associate that helped me pick the right type of wax but honestly, the strips and applicator went straight into the trash because the wax just would not come off of anything... Including my hands! Had to put a bunch of baby oil on my hands and fingers then scrape off the residue with a towel. Other than that, I still give this four lippies because it's a great wax that took away the hairs effortlessly and I will definitely continue to use it even the strips and applicators aren't reusable.

This wax smells nice, looks nice, but it's not nice enough for me. My skin is not particularly sensitive to waxes, but the problem I have with this one is that it's extremely sticky. I've been working with wax for a long time and I like chocolate wax the best. The honey one doesn't have anti-inflammatory properties, but it is definitely all-purpose and still gets the job done. If you have sensitive skin that just gets red easily, then I recommend trying a different wax.

I LOVE this stuff. I started out with some Sally Hansen wax and quickly realized that just wasn't going to work. Picked this up at Sally's and used the strips that had come with the Sally Hansen, then later bought some of theirs. I warm it up (I use a candle warmer but you should use the real warmer for safety blah blah blah) spread it on, use the strip, and out comes the hair. Easy as pie. Yes, it can be messy if you aren't careful, and you shouldn't get it on your floors and counters because it will be difficult to remove. On your body, however, a little oil (I use vegetable because it's cheap and I have it) instantly makes it unsticky and it just washes away. Though user error can be a factor as to why wax doesn't work, if you follow the directions it should work perfectly! Over time, it has hurt less and less, and I will never go back to just shaving!

I've used pre-waxed strips in the past and they were not so effective. I even went to the salon to get waxed once last year, and it was very effective but so expensive I never went back. Therefore, I was delighted to see a promo for a Gigi wax kit at Sally's, which included the All Purpose Honee Wax, as well as the warmer, large muslin strips, and (useless) instructional DVD, all for $30. This wax has a really nice smell of honey, and takes 15-20 minutes for a full jar to melt to the proper consistency. However, the reason why I gave the product a rating of 4 lippies is because although it does a pretty good job of removing the hair for the most part, it does cause some of the fine hairs to break rather than being pulled out by the root. Fortunately, the coarse hairs were pulled out just fine, unless they were embedded, so I needed tweezers for that. I used this for my legs and underarms and used way too much wax on my first use, 75% of the jar! I believe that when used in normal amounts, the jar should last for 4 uses if used for a full leg wax. One jar costs about $15, so even with the cost of strips and applicators, it's a heck of a lot cheaper than going to the salon. I plan to try other Gigi waxes!

Sally was having a sale to buy the warmer, the strips, the DVD, and this wax all for 29.99. I purchased it because I figured it would be easier and less messy than me cooking sugar all the time. Tried it last night and needless, to say that I loved these products. I am very happy that I took advantage of this sale.

Update: I have been at home waxing for about 8 years now and this stuff is still the golden standard. I officially will never try another wax because this one is just so good. I wax my legs every month, along with upper lip, underarm, and whatever else I feel like doing. I've even got brave enough to Brazilian wax myself, although I highly recommend just doing progressively more thorough bikini waxes before you attempt to &quot;go to Brazil&quot;. One jar of this stuff last for months, and Sally's is always having sales on Gigi waxes. Every time I try a different brand I have to come crawling back to this stuff and beg forgiveness for cheating. I tried the espresso wax by this brand once and hated it. The all purpose honee is freaking awesome though. PROS: Smells neutral, is easy to work with, does not rip off skin, gets all the hairs, just works beautifully. CONS: It is more expensive than some other brands, but with wax, you get what you pay for. And it is still loads cheaper than going to a salon for a waxing. One jar of this allows me to wax my entire legs 4-6 times. My tips for home waxing: -Practice makes perfect! Laugh off mistakes! My first time home waxing was pretty hilarious in retrospect, but now I can do it with my eyes closed. -Don't wax when your kids, husband, milkman can bother you. You don't want to be rushed or have toddlers banging on your door. Waxing takes concentration! -Bring some kind of oil in bathroom with you so after the waxing is all done, you can easily get off any sticky wax residue. I swear by coconut oil but any kind of oil would probably work. -wax sitting on top of an old towel. I am careful but sometimes drops fall. I store my wax warmer on top of my folded up &quot;waxing&quot; towel so I can just pull them out of the cupboard together come waxing time.

I thought this was really guna work.. For the pain not even all the hairs come out.. Im suree i grew it long enough too. It sucks

I use to use Suddenly Smooth Deluxe creame wax and it sucks, because it broke a lot of the hair. I recently made the switch to GIGI all purpose honee, and I noticed very minimum breakage..I thought it was my technique but when i waxed my sister, she couldnt get over the results, her legs were smooth and she just loved even the littlest hair came out.. This wax is amazinggggg! I just bought the DARK HONEE to try out, because i have coarse leg hair, and thought i might try that out too....Will update the results soon. I think this wax is a great buy, and if you're talking about it being sticky...then you're an idiot..its a wax..and the stickier it is, the better it is at sticking to your hair.. :) If it got everywhere, then its your techqniue not the wax..and you can buy a wax remover...and it comes off SOOO EASILY from my legs, when i use olive oil and slather it on and use a strip to remove any residue and that moisturizes my legs too... Definitely recommend it to others and repurchase

I purchased this wax (14 oz. can) along with the warmer, muslin strips, and how-to video at a promo price of just under $40 at Sally's. I have dark hair and I'm a total newbie at waxing. I think GiGi All Purpose Honee Wax is an excellent product (if you have the right tools) and I highly recommend it. I found it very effective for hair removal. The wax warmer is an indispensable tool to achieve the perfect wax consistency. Yes, the wax does get gooey and sticky BUT that is why it is effective at hair removal and, hello, YOU CAN'T EXPECT TO WASH OFF ANY WAX RESIDUE WITH JUST SOAP &amp; WATER! I think the key to my success as a first-time waxer was PREPARATION. I watched the how-to video first (sure it's dated but I found it informative) . Also, before I started waxing, I had all my tools within reach: baby powder, lots of applicator sticks, a pair of scissors to cut the muslin into whatever size I needed, GooGone and paper towel to clean up any accidental drips, and I had some azulene oil leftover from my Parissa kit. The azulene oil was very effective in removing any wax residue from my skin plus it has soothing properties to help minimize any redness. I worked on my legs and brows first. I was so pleased with the result that I decided to try waxing my upper lip and my underarms the following night. Again, I was so pleased with the result! I also ended up using only (maybe) 1/10 of the product so I know this tin will last me a long time, perhaps close to a year. I gave it only a 4 for packaging because although I like the tin, I didn't like how there was wax stuck to the bottom of the lid making it hard to remove. It should probably come with a plastic sheet on top to keep the wax from sticking to the lid during shipment. Other than that, I think this product is just awesome. This very happy newbie will definitely re-purchase!