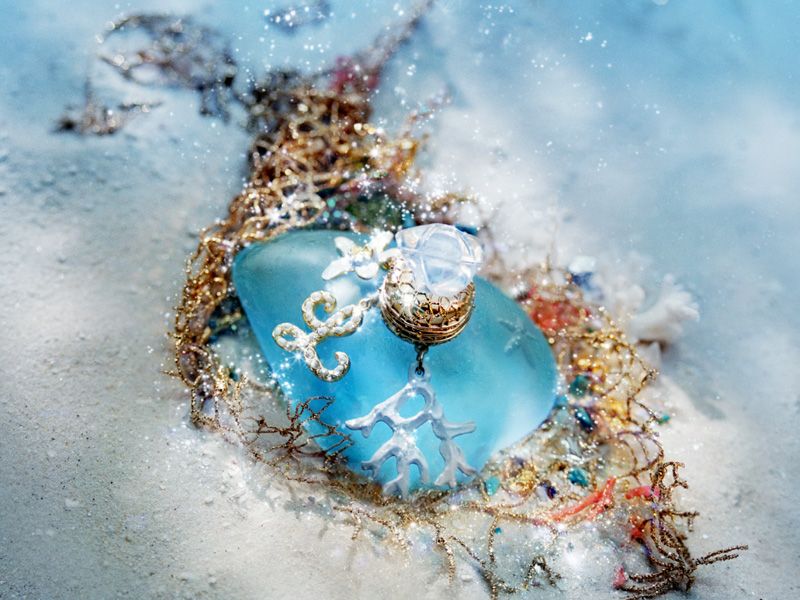 Notes from Fragrantica: grapefruit, bergamot, orchid, frangipani flower, amber, musk and woody accords (driftwood). This opens salty and fresh with the bergamot...almost a tangy beginning and nothing at all like L de Lolita. The only thing that makes this a flanker really is the bottle, I find they are not even cousins when it comes to scent. That being said, it is gorgeous, as most LL scents are, and well worth hunting down a bottle. As the fragrance dries down you get warm amber and driftwood, and a generous tropical dose of frangipani throughout. The frangipani is lovely and present, but is not overly strong. This is a warm, salty, powdery and nearly creamy scent after a few hours, and I really love it. The bottle is the same base design as L de Lolita (heart shaped aqua stone)...but it's frosted rather than clear, with coral adornments. Discontinued but still relatively affordable.)

I stumbled across the reviews for this scent a while ago and impulsively ordered the small size. It was fairly inexpensive and the bottle is absolutely charming - a small, asymetrical matte blue glass thing reminscent of polished sea glass, with little beachy charms dangling from the neck. Now bear with me as I am not great at describing scents and picking out notes but I can do experiences. At first, I did not like Coral Flower. It smelled nice enough on me: powdery with some sweetness and zest, but nothing jumped out at me to scream &quot;this is a YOU scent.&quot; It made me feel...aged. Not like the modern fly girl I aspire to be, and to present to the world. In general I prefer heavier scents, modern Orientals, hippie shit like amber oils and whatnot, sandalwood scents, and the occasional big white flower perfume. But there was something about Coral Flower (I'm sorry, I can't keep trying to remember the French spelling throughout the entirety of this review haha) that haunted me. I kept sniffing it and shrugging, sticking to liberal applications of my beloved Tam Dao (seriously, so good). But I revisited on random days, and the scent began to get under my skin. The woody, salty notes clung to me closely, warmed by my body and wafting up to my nose, while the fussy powdery opening chilled out a bit. I found it to have amazing longevity on me; I kept catching whiffs days and several showers later. Yet the sillage is not overpowering, it's *just* enough. It doesn't smell &quot;beachy&quot; to me, but it does smell oceanic, salty. It's fairly complicated to my nose and well balanced, as in I have to concentrate when trying to pick out the specific notes. It smells like sunwarmed skin. It smells pretty effing good. I'm happy I followed through on this particular impulse.

This feels rather like a Jo Malone than a Lolita Lempicka to me, could have very well been released last autumn along with Sage &amp; Sea Salt. Fleur de Corail opens with a sweet citrus and powdery amber in equal measure so it's neither crisp nor zesty, there is some uniformity to the composition considering the warm - in a sun drenched way - scent that follows. The heart features a beautiful driftwood note I find very charming and relaxing, for a brief moment brought Eau des Merveilles to mind. Not that they smell alike but this kind of salty wood is fairly rare in commercial fragrances. Here is accompanied by tropical frangipani but not overly so, it's still a soft and feminine woody scent rather than floral to my nose. The drydown is very much a skin scent with the addition of soft musk. Average sillage and longevity. Overall this is an unusual interpretation for a beachy scent, would classify it a floral woody musk rather than oriental floral. There is also no sun tan lotion scent to be found here or much sweetness, I find it nicely balanced and none of the notes dominates. It's quite likely to consider a small bottle for the upcoming summer. The relatively low price tag and beautiful bottle won't hurt either.

I simply LOVE it, it is so unique, everybody notices it and lasts all day. Smells like coconut, incense, vanilla and lemon...all mixed together which makes you feel like a sweet and seductive mermaid. Use it only at night because it smells heavenly.. i promise. I read it has been discontinued so I'm saving my bottle like a treasure, will only use it for very especial days... so sad :(!!!!!

I bought this on a website because I really loved one of the other Lolita Lempicka fragances and I felt like splurging and buying something new and different. I was so excited and early awaited receipt of my order. Once I received the package, I tried a difference fragrance each day. I decided to wear the Fleur De Coral to work. Big mistake! It smelled like soap and didn't give me that &quot;I feel pretty&quot; sense that most of fragrances provide. I do have to say the bottle is pretty but that is where my positive comments end. The fragrance smells soapy and does not linger or make me feel like I have taken a stroll through a beautiful flower garden, as do her other fragrances. I am still a Lolita Lempicka fan, but I do not recommend the Fleur De Coral! The bottle is a keeper and my granddaughter loves it.

I own three different Lempicka fragrances, and this is my least favorite. Luckily, I didn't pay much for it since I found it at a discount store. While the original L is rather rich and vanilla cupcake-y, it can be a nice comfort scent in the winter. This scent, Fleur de Corail (Coral Flower), is just so BLAH. It's not terrible, but it lacks personality or interest. The original Lempicka fragrance (in the whimsical apple-shaped bottle) is also a better choice -- while it's quite sweet and has that unmistakable licorice note, it also has character. I would not repurchase this one.

I like this perfume. It isn't sweet, and it's different from anything I've ever smelled. It is a summery perfume, and it reminds me of the beach and the sea. There is a salty driftwood note present that is particularly nostalgic for me. When I was a kid I used to think that driftwood was really neat, so that note may appeal to me personally more than other, I dk. I don't wear it all the time, but it is one that is great on occasions, when a certain mood strikes...

On me, this perfume smells like soap! Like white bar soap - very simple, very clean. It doesn't smell tropical, fruity or floral, just like soap. I love it, but not for the reasons I thought I would.

Sunscreen. Pineapple, coconut, sandalwood and modern fake musks. It's pinacolada scented sunscreen. It's also actually very nice, but soooo not my personality. Mellows to a vanilla sandalwood sunscreen. And while this is not me on so many levels, I still find myself sniffing at it. SO. Instead of swapping it immediately as I'd planned, I shall try it out some more and think about it. There's a mood in there that it evokes so perfectly of summer days, it's almost art, in a minimalistic fashion. Interesting. EDIT: Well, I've kept it and now I'm loving it. I get far less pineapple when I spray more on and it mellows down to a gorgeous almost rice powder driftwood scent that lacks the super sweetness of other Lempickas. It's compulsively sniffable, so I'm upping from three lippies to four. Liking it very much.

At first spritz it's kind of overwhelming, but it dries down to something lovely and powdery. I might have bought it if the dry down were not so similar to something I already own, Fendi Palazzo, although that scent is discontinued now. I don't get beachy or fresh from this, but it is quite nice. Another issue is that the packaging, although very pretty, was broken at the store where I tested it, so it may not be that durable. (The sprayer was sticking and there was still A LOT left in the bottle.)