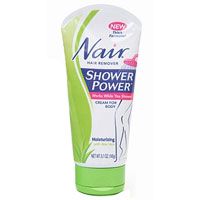 i've been using the pump version of this product and i really like it. i leave it on for about five minutes and then i rinse it off in the shower. it removes all my hair and leaves my skin really soft. there isn't a super bad smell and it doesn't burn at all. something really weird happened one time, though. i used it how i normally do and about an hour after i showered i had itchy bumps covering my legs. i hadn't used any new products on my legs that day and they were hives. it hasn't happened again though so i think my skin was just being weird. overall i much prefer this over shaving.

I bought this without reading these reviews (or I likely would not have) for my 11 year old - and thankfully, we had NO issues - and it worked. No irritation. We did not use the sponge that came with it - and this has been re-formulated, I think - it is 2016 and came in a blue &amp; pink (on white) pump-top bottle. Cheap and fairly easy. We did a &quot;patch test&quot; first Thank goodness - no issues.

Very upset with this product! I bought it in hopes of being able to wear shorts because I live in FL and it's hot, but I ended up right back in pants to cover up the repulsive rash this gave me! Some of the welts on my legs actually bled and it stung just like a razor cut would. Please save yourself the money and avoid unsightly spots and blood on your legs. STAY AWAY FROM NAIR!

This stuff is dangerous and needs to be taken off the shelves. Applies this product as directed and left on for two-three minutes and was left with raw wounds on my legs. This stuff literally burned my skin off my legs. It's going to take weeks to heal. I would absolutely stay away from this product and stick to shaving.

I bought this in the pump. I followed the instructions and left it on for 3 minutes, and then used a wash cloth to remove it, well it didn't do anything except for leave little tiny black stubs. About 10 minutes later my legs were covered in red burning dots and rashes. I put on Vitamin E gel and it's still burning very badly. I DO NOT RECOMMEND THIS.

So I am 14, and I have gym every other day in school. I am very very hairy, and I usually wax. My mom always tells me it's better to wax than shaving. (I HATE SHAVING). So, as on this product (I used the one with the pump and the sponge.) and I read all the directions. I thought it would be great to use this one that smells great. But no. I am miserable with this insane burn I'm getting. I used Veet's spray hair removal and THATS WAYY more better than this crappy junk. Yes, it removed most of my hair, but I have chunks of hair in random places. So I've decided to come back to it in 3 hours. But the burn is still continuing. (the sponge is worse than anything so just get a cloth of some sort) I won't be buying this product ever again. It's $9 at Walmart so I don't think I wanna waste money on this. My skin is very rough and ugly. I'm hating my self right now! DONT BUY IT!!!

My friend swears by this stuff, so I had to try it. I'm giving it two lippies because it did remove the hair from my knees on down. But I used it yesterday, and today my shins are almost as stubbly as if I had shaved yesterday. Okay, now I have to say, I am almost miserable after having used this (and mis-used, I must admit). I read the directions (no, I did not test in an inconspicuous place) and followed the directions (almost). I applied it to my legs and my underarms, and (blushing at the stupidity of it) my chin. Go ahead, laugh. Point fingers. I used the sponge to remove the product (throw that thing away and just use a washcloth). In fact, the sponge became so slimy that I finished removal with a washcloth. Almost immediately my underarms felt incredibly burned and painful (and fine, so did my chin, if you must know). My underarms (yes, and my chin) burned and hurt all of yesterday afternoon. I applied baby powder to my underarms several times, with little comfort. Later in the day, my thighs started burning. This morning, my underarms are still very store, and my chin is covered in large, red blotches the type of which I haven't seen since I had cystic acne flare-ups. Thank goodness I do not have to leave the house today. I have applied A&amp;D Ointment to my chin with the hopes the redness will go away before tomorrow. The ointment relieved the pain. I have to have my car worked on and there's nothing worse than being a woman and going into a car dealership, except going in with a red, shiny, greasy splotchy chin. Ladies, putting it on my chin is the dumbest thing I've done this week, and I don't recommend it. I don't recommend this stuff at all, actually. It removes a bit of hair, but at what cost?? Oh, I bought the product that's in the pump bottle and for sensitive skin. I would hate to find out what the &quot;regular&quot; product would do to my skin. No matter which one you use, if you're tempted to remove chin hair, DON'T. I'll stick with my razor, thank you.

No one should ever, ever buy this awful, pain-inducing product. If I wasn't so embarassed by how my leg looks now, I'd upload a video. I used it 18 hours ago and am literally still feeling the burn. And, I have a high pain tolerance. This stuff caused my baggiest, softest pair of underwear to literally cut lines in my skin. My entire leg looks like the Hiroshima bomb was dropped right in the center of it. My right leg is swollen to twice the size of my (thankfully) spared left leg. I have literally bled today on the leg the razor never touched. This stuff should never have been &quot;approved&quot; to treat any space within 5 miles of the bikini line. They say misery loves company, I guess the party is at my house. I've used Nair Hair removal in years past, first time ever using a Nair &quot;sensitive&quot; product. Worst results in over 15 years of using Nair products. Never again.

First of all, if you buy the one with the pump that comes with a sponge... Throw away the sponge. It's useless. You're better off applying with your hands and then getting a cheap washcloth from Walmart/Target/the dollar store for removal. It will work much better. The actual product itself works great. Stays put much more easily than the usual formula, but I don't think it's as effective as the regular, non-&quot;stays put&quot; formula. With the regular formula, ten minutes is more than enough but with this one I had to leave it on for a little bit longer. I still prefer this one over the regular formula because it doesn't smell as bad and the fact that it stays put makes it much easier to use.