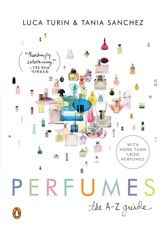 Love this book! Their reviews are subjective ofcourse but I still agree with most of them except for Luca's love of Beyond Paradise....

Oh how I love this book.....I read and re-read it so many times when I discovered that there were other people In the world who were crazy about perfume! I swear I know it off by heart and some of the reviews are just so dang FUNNY....Luca's reviews of the Angel flankers....'covering an eighteen- wheeler with a purple hankerchief '...to me are immortal literary gems! I adore the subjectivity and the disregard for commercial hype, the droll wit in nearly every review, the writers' personalities and passion shining through. And in getting the gist of Luca's taste, in particular, I made a beeline unsniffed for many things even if he was a bit dismissive...like a very expensive (adored) purchase of Musc Ravegeur, &quot;hippie musk&quot;; well as an old flower child how could I resist?? I live in hope that they will write again!

This book is useful as a guide - as it says. The reviews are based on the perceptions and opinions of the authors which can be frustrating to some people. Scent is very subjective. The book has loads of great info on the history of specific scents as well as on perfumes in general. It is also very entertaining. The authors write well and some of their comments will have you in hysterics even if you disagree with their opinion (see reviews for &quot;Clean&quot; fragrances, Nasomatto &quot;Duro&quot; and Le Labo &quot;Ambrette&quot;). Pros: Informative Helps to find scents that are in the same family of ones that you like. Very entertaining if you don't take it too seriously. Both authors know their stuff about fragrances. Cons: Will not have info on scents introduced after date of publishing. Reviews are somewhat based on personal and subjective likes/dislikes of authors. I will always have a definite love of this book and the authors. It(they) saved my life when I was very sick and miserable a couple of years ago and could barely read 2 pages at a time. I go back to it frequently.

I think the negative reviews on this book come from either people who are upset because they are madly in love with a fragrance that the authors describe as &quot;cat piss&quot; (or worse) or because they were expecting a technical description of fragrances (what category, what ingredients, a bit of history) and this book doesn't do that. Listen, the reviews are very subjective, but art (and I do consider perfumery to be an art) is always subject to personal preferences - I may love something that you loathe. Yes, I was disappointed to see the authors' less-than-enthusiastic reviews of some of my favorites (and I'll never understand their love of Estee Lauder perfumes) but on the whole, I think they are spot-on. The great value of this book is educational - I now understand why some of the fragrances I used to love no longer smell the same, because of the evils of reformulation - and I now have a list if perfumes that I am going to try, based on the authors' recommendations. Maybe I won't like their choices, but then again, maybe I will discover the (olfactory) love of my life. That's part of the joy of fragrance, isn't it - trying new perfumes and adding them to your collection.

I have both versions of this book, I used to take the hardcover (all white cover with blue perfume bottle on the front) out of the library constantly and post it note the hell out of it, then renew it 5 million times. My husband finally bought me a copy because he wanted the library to get their book back! I now have my own hardcover copy and yes it's all dog eared and post it upped! I just got my soft cover newer version (smaller book, more pages, multiple perfume bottles on the cover) in today, I eagerly paged through looking for the one glaring error from the original book to no avail.....Pink Sugar was once again snubbed! WTH.....it's one of the best selling and IMO smelling perfumes out there....why Luca and Tania?!?! All kidding aside, I really do like Pink Sugar and would like to know what Luca and his woman think of it, something tells me they don't think too highly of it. I really think you need to take this book with a grain of salt and a huge sence of humor as Luca and Tania do tend to go after perfumes they find fault with and some of these may be favorites of yours. A bunch of the descriptions of the perfumes are actually very funny, some are short history lessons, some are very brief, some are pages long...all in all these book are curremtly and probably will always be favorites of a fume freak such as myself, I've used my hardcover pretty much daily and have discovered and tested tons of perfumes that I probably never would have tried before discovering these books. I put a no for would I buy this again and obviously I wouldn't as I already own them but if I ever lost one I would replace it in a heartbeat.

This is a wonderfully fun and witty book full of opinions and ideas. The responsibility of interprepating the reviews and ideas is soley on the reader. I appreciate this as another opportunity to learn how people experienced fragrances at a given moment in time... like the awesome opportunities we have by reading and writing reviews on makeupalley! Just like us, the authors have no responsibility to like anything- and, just like us, they have preferences. I think they do a nice entertaining job of conveying ideas about why they label masterpieces as such.

I love the critical comments in this book. Like being on MUA, it's a great place to gather negative and positive comments about something you are considering to buy. I've used it to short list perfumes to try when I go to the mall. It's a great place to start looking. Do I agree with everything? Absolutely NOT! But that is how I take the reviews here too, not as gospel, but as a place to start thinking about something. In the case of perfume, I've been thoroughly enjoying testing and spritzing many scents kind of like wine tasting. Doesn't mean I'll buy everything I like or even like everything I try, but it's a great place to start learning about what perfumes do, and what to sniff for when you are evaluating a scent. LOVE their star system, although some things that I adore are only 3 or 4 stars. I don't agree with all what they say, but enough of it, that makes this one of my more useful reference tools.

Well written and a great resource. I admit, Mr. Turin and Ms. Sanchez and I must have similar tastes in perfume, because they gave many of my favorites 5 stars. However, agreed or not, I found it written beautifully by credible and believable people. Loved it. Hope they come out with another addition soon- I'll be first in line to buy.

Oh, for the love of Pete. Some of my fellow reviewers here are completely missing the point. This is a book of criticism. Criticism, whether it comes from Roger Ebert, Robert Parker, or Martin Bernheimer, is by definition subjective. The point is not whether they are &quot;right&quot; or &quot;wrong&quot;, but to hear an informed opinion (hopefully one among several) of an expert in the field. But in the end, it is an OPINION, not a papal bull. So what is my opinion? I love it. Witty writing that yes, can occasionally border on snide (but never actually gets there). Nobody can doubt that Mr Turin and Ms Sanchez are very knowledgeable about their subject. And yes, their tastes are somewhat rarefied. Why shouldn't they be? Would you rather read the opinion of someone who pronounces the latest toilet-spray fruity-floral &quot;awesome, totally, like, my favorite perfume EVAHH&quot;? I do not always agree with them, but I am always entertained and enlightened. For instance, I personally do not care for some of their 5 star picks, but I understand why they are masterpieces, and I appreciate their importance to the art form of perfumery. I bought the book in hardcover, and have now upgraded to the expanded paperback version.

Don't Go to the Cosmetics Counter Without Me 6th Edition253 reviews

Don't go to the cosmetics counter without me 7th edition46 reviews