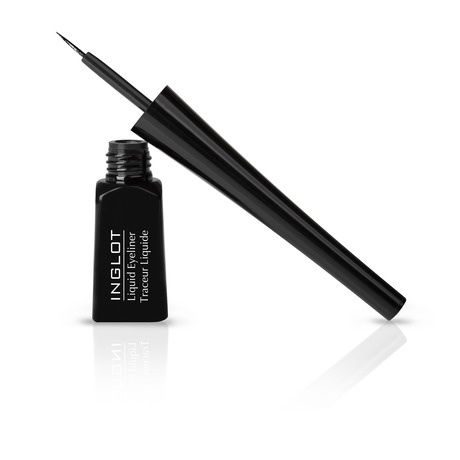 — Apparently my originalt review got deleted so I’m adding 1 in. I got inglot #25 liquid (matte black—the numbering system has discouraged me from buying more inglot—I cant tell what color is in the pix swatches. I had to google descriptions of the colors so I’d get the matte black. It has a felt tip (that you dip into an ink well. It’s not a marker “pen”) mine the tip has gotten more blunted as I’ve used it more &amp; more (-1 lippie for packaging). 5/5 for the eyeliner this formula isn’t waterproof but you’d never know it. It’s quite smudgeproof &amp; my eyes are so watery-Rheumy badly but this rarely smears. It does take a hot second to dry but it’s inky Black. I trace over it with my Tom Ford ONYX eye pencil kohl. It makes it really black &amp; dramatic &amp; it stays put! This was $14 iirc but it’s high quality for a cheap price from Macys.com . You have to spend $20+ on a good eyeliner normally. I’m not much of a gel gal but #77 is a good black gel to get if you need a waterproof eyeliner. ETA: For me tbh I prefer elf’s liquid liner if I’m going to use non WP as it has a better brush. This is like trying go like your wings w a dull pencil. I don’t know if I would rebuy #maybe I did buy a back up I lost it somewhere promptly. It started out being HG but as the tip deteriorated it made demoted less HG &amp; more like #ugh try #elf ladies &amp; gents for $3USD you don’t have much to lose, you might find your HG like I did. Grade: B+/A-

I think I got too used to NYX eyeliners that never smudge on me. This eyeliner smudged SO FAST on me. I have super oily eyelids but still, it was pretty bad. I did like the opaqueness though and I'll still use it with some eye primer underneath.

It's a real shame about this eyeliner that the lasting power isn't the greatest. I bought a dark blue shade (30?) and it was just the colour I was looking for. Application was the easiest I've ever had for an eyeliner (I normally buy felt tip ones and regret it, but this one has little hairs). The colour complimented by brown eyes well. I had to apply more than one coat though for full opacity - the formula is surprisingly super wet! If you shake the bottle you can hear the product splish sploshing inside (something I've never witnessed before with a liquid liner). That's about where the good stuff ends - it bled a little where I did my wing but nothing too major. I had it on roughly 7 hours the first time I tried it, and at the end of it my wing was obliterated and I had a few flakes on my under-eyes and glasses. It held up reasonably well on the actual eyelid, though, I'll give it that. The flaking doesn't really bother me, but there's nothing I hate more than eyeliner fading away. Particularly the wing! I'm thankful it didn't turn out as bad for me as it did for the other reviewers here. However, I paid 23 dollars for this sub-par product and now I'm quite limited as to when I can wear it (for a short party or when I only have a few classes in a day, I guess). Overall it's not completely terrible but for what you get considering the price I sure as hell would not recommend and certainly not repurchase. You'd be better off with something from the drugstore. At least if it's not that good you didn't blow a lot of money on it. And for the record, my HG liquid liner is by KIKO (precision liner). And guess what? The price was practically a quarter of this one - yup, 5 and a half dollars.

This was horrible. I mean horrible!!! I bought the purple color and I was very excited about it. However, within an hour at most, it just crumbled and disappeared. It was so bad! Don't buy this!

I have this liquid eyeliner in shades 33 and 34 and had the same issues with both. When I first used these liners, they were super watery and bled everywhere and didn't look anything like the colour on the website. I found I had to stick a toothpick into the little tube and wiggle it around to release the ball bearing and then shake it up loads. After I'd done that, they both perform brilliantly, although it is annoying that I needed to do this for both shades and suggests it's an issue with the liners as a whole and not just one dud. Shade 33 is a beautiful springy grass green and shade 34 is a really deep metallic emerald. The brush on this liquid eyeliner is small and flexible and the light liquid texture makes it easy to draw a precise line. Once on, they wear all day and don't crack, smudge or fade. Shade 33 does stain my eyelids a little. I do feel the price is a little steep for the relatively basic packaging. I do still really love these liners and the fact that they come in such fun colours! http://maliberrymakeup.blogspot.co.uk/2013/07/inglot-liquid-eyeliner-in-shade-33.html http://maliberrymakeup.blogspot.co.uk/2014/12/inglot-liquid-eyeliner-in-shade-34.html

I want to complain regarding my purchase of Inglot Liquid Eyeliner from Pacific Mall, Subhash Nagar., Delhi. It was completely different what the representative demonstrated. The eyeliner is total watery, so much that the eyeliner ink was falling onto my clothes . And when i went to return the product , they totally denied and my whole purchase of 900 INR is totally wasted .

No staying power whatsoever. Not waterproof, not smudgeproof, not flakeproof. These actually invent a whole new method of disappearing: Pure evaporation. They just disappear off your lids, without leaving a trace. I can't even find any flakes or specks on my face. Just missing liner. Where did it go? Who cares. Not buying ever again. Pity, because the color is gorgeous and the application effortless. But we buy makeup for the end result, and not the act of applying. Fail.

Beware this product is really bad!, it flakes off straight away, there not much to say its such poor quality. The packaging is sleek and nice the brush is great and accurate. But as far as the actual product goes dont waste your $$$

Flakes right off. This is horrible.

My mother only wears liquid eyeliner (she had a rough time using pencils with hard contact lenses) so they have always been on my beauty radar. Tried them all over the years. Wow. This was phenomenally bad. Application was lovely. The brush was very thin (maybe a touch too long) but it dried very quickly. However, the wear was awful. Never have I had a liquid liner flake off and that's exactly what happened. I wore it for 9 hours and when I went to remove it, it flaked and the liner itself was patchy. Crazy bad. However it did remove easy so that's something. It's a shame because I really liked the color (#29) which is a dark red plum.