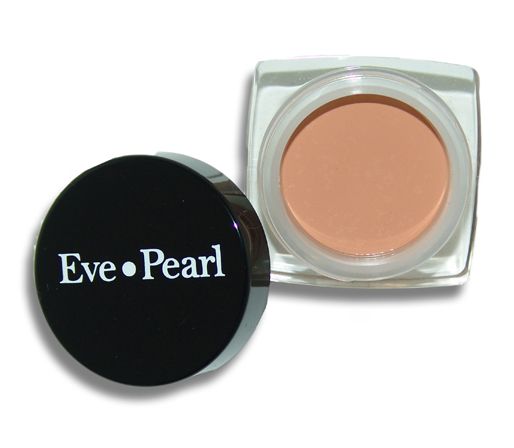 I don't understand why so many people like this orangey stuff. It's like a big smear of orange under your eye. Greasy. Shiney. And did I say orange? So you bascically wind up with dark circles smeared with orange. And for the money? I had to spend extra time washing this OFF, and that only made my eyes even more tired looking:(

I tried the Eve Pearl dual Salmon Concealer in light/medium color. I personally thought this product was just ok. I have dark blue under eye circles, and I was hoping this was going to be a miracle product from all the reviews I've read, but I didn't find it any better than some M.A.C products I tried. It does help with the dark circles, but certainly doesn't cover them completely. It didn't last nearly as long as my M.A.C products, and it cost way more! (I don't live in the US, so the cost of shipping was unreal). I tried applying it several different ways from instructions on youtube videos, but I didn't find it made much of a difference. I also found that under florescent lighting, the salmon color would shine through the lighter color and gave my under eyes a orange tint. The texture was nice, and it felt good on my skin, but it couldn't cover my dark circles, so I won't be buying this product again.

OMG you guys, this is freaking awesome! I'm dealing with pretty heavy under eye dark circles and this is the ONLY thing that works. Just got it in the mail, tried every concealer there is out there on the market and estee lauder double wear was Always the only thing that would lighten my dark spots, but would make it a greyish dark spot. But this is a total eye lift for me! Just need a little bit. I have the combination package with medium and light. I use medium to cover the entire eye lid under eye and then I use the light colour to hide the bag (just fill it in, not beyond that shadow line!!!). This is prettyyyyyy nice and my boyfriend noticed immediatly! SUPER HAPPY!

This is the one concealer I cannot live without. Although the concealer's consistency is really creamy, it doesn't become cakey after application. Throughout the year, no matter how dry my under eye area is, this concealer never creates dry patches under my eyes. My Marc Jacobs Remedy Pen creates dry patches underneath my eyes during the winter days so I went back to using this concealer, hoping it wouldn't do that same and it didn't! I have heard some people say/use this as a color corrector but I just use it alone. If it is a color corrector, I do believe it because it doesn't provide FULL coverage underneath the eyes. I can see a little bit of my dark circles seeping through but that is fine for me. I don't want my under eyes looking too cakey.

This is by far the best under-eye concealer I have ever tried. It's the ONLY one that actually hides my under eye circles. And I have severe, dark circles hereditary.. It actually works it's best when you use one shade DARKER than your natural skin tone and under your foundation. You can apply a highlighting pen over your foundation if you want to brighten the area. This is the best way to use it, it actually conceals the dark circles and not accentuate them, like all other concealers I've tried, and I've tried A LOT of them! I used to use Erase Paste (which was ok, but nothing special) and Bobbi Brown, which is also good, but not as good. Salmon concealer has the best tone, it's pinky-orange color really covers the darkness. BUT, the one that works better for me is the one in the pot, not the compact one. The formula in the pot is much thicker and so it covers better. This is actually a con, since the pot is quite expensive.. Update 2/27/14: I think Eve Pearl has generally made her salmon concealers less thick. The concealer in the new pot I bought doesn't seem the same when applied. I have been using this for more than 2 years now, I first bought it when it was a fairly new product and it was more than great. I believe the consistency has changed now, unfortunately.. I still like it, I just have to use more to get a good coverage.

I finally fell for all the hype and purchased this when Hautelook had it on sale. This DOES do what is says and eliminates all darkness around the the eye area. I was impressed with how it cancelled out everything with very minimal application. However, that being said, I don't like the consistency of this product. It has alot of &quot;slip&quot; to it. I was wondering how a product that says it is &quot;Oil-Free, Paraben-Free, Petrolatum Free and Mineral Oil Free&quot; can have such a slippery consistency. Then I started reading ingredients and found that they use Trigylicerides (Glycerin, which is extremely slippery if your every worked with it in science class.) I also noticed that it caused my mascara to smudge, which my mascara never did with other concealer's I've used. I did use a transparent powder over this, but I really don't care to do that at my age (50), because of the tendency for it to settle into fine lines. I've used Estee Lauder's DW concealer for quite some time and it has never caused me any problems. As much as I wanted to love this, I can not say it lives up to the hype. I won't toss it, but it will be a last resort item.

Some products work for some people but not for others. This really didn't work for me. I hated the consistency, its really heavy and I had difficulty applying it without putting too much on. Even though I used a small amount on a brush, I found the product to sit in my fine lines around my eyes. The upside is that its in a good container with a little mirror. Back to my tried and trusted Mac.

WINNER! This came as part of my Eve Pearl HD Cream Palette and it is a stand out! I have puffs under my eyes in the am (fluid retention) as well as some discoloration - not really dark circles per se, it just looks like I have not gotten a full night's sleep. This takes it all away. All of it. It also comes with a separate concealer that I can use on top of it, but this honestly gets the job done so well I often don't bother or just add a layer of foundation on top, then powder. I will be using it the rest of my life and am so happy to have found it!

It's okay. It's really more of a corrector for circles. That being said I generally correct, apply foundation, and then matching concealer...or use this, then concealer, and then mineral powder. I wouldn't say I'd choose this over bobbi brown correctors or vice versa. I always use my Clinique dark circle corrector (it's a love/hate) as a base to keep it from creasing so I can't comment on use without an under eye primer. I suppose since I'm still looking for a different one says a lot about how I feel about it.

I use this for my under eye circles in conjunction with the peach colour in the MUFE concealer pallette. I put this over the top of the MUFE as it is a better colour for counteracting the blue/black colour of the dark circles. The reason I use the MUFE underneath is that this salmon concealer is not very thick and therefore doesn't give the greatest coverage. So I need to use the thicker concealer underneath which stays in place better. This is easy to apply but as mentioned it doesn't give the greatest coverage on its own. The colour however is perfect.