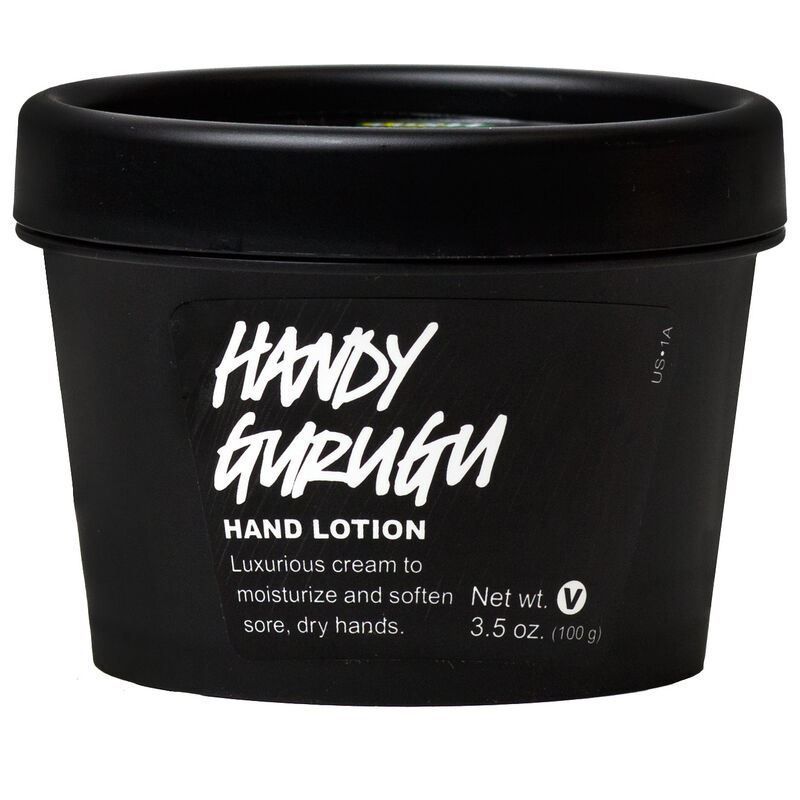 Last year I told you Lemony Flutter was the only thing that worked on my terribly work-ruined hands. It does work on my terribly ruined hands. But this stuff! Oh sweet merciful blue baby Krishna, this literally makes me want to cry with gratitude and relief! If you have especially bad hands, a well-meaning SA may advise LF over this one because it is thicker. Don't let the lighter formula of handy gurugu convince you it's less potent though. It seems to sink into the deeper layers. This soaks in nice, leaving hands feeling very moisturised for hours, even with frequent washing. Since October, I've only been applying about once a day and it really worked. I have no redness, cracks, bleeding, scaling, even my cuticles are MUCH better despite me not giving them any care. I do get dry cuticle bits sticking to the nail, but those are easy to remove. The nail fold which used to be difficult to soften and push back though is looking great, I don't have to push it back at all, I don't get painful bleeding cracks in it that I used to get all the time and rip off like the compulsive hang nail picker I am. You can touch stuff almost immediately and it won't leave residue on it. It doesn't soften the hard skin near my finger tips, I file that down. But I have no pain, discomfort, unsightly skin, dermatitis, for the first time in years. Now that it's windier, I use it more often, and am down to the last third of product, having bought it a good two months ago. I know people say you need half a pea size per application and whatnot, that's not realistic for me. If your hands aren't so difficult you might need less, but personally I'm okay having to purchase more often, simply because it's a miracle. It was about 14 euro, not cheap, but I used to spend much more buying countless products none of which worked, so I'm practically saving buying this. The scent starts out as earthy (natural but not dirty smelling) rose, and settles as something clean and powdery. I'm not too demanding regarding handcream scents, but even my coworkers always start sniffing around asking what that gorgeous smell is when I apply, so it must not be bothersome for most people. It may seem strong the first couple of minutes, but i don't think it's anywhere close to headache territory. It's not as strong as LF (which also smells nice to me). I'm okay with the pot packaging. They recycle, I don't dip dirty hands in it, I close the lid properly, I don't have it hanging around unused for months, so I think it's fine. But mostly, if you are cursed with sensitive hands and work or weather that's hard on them, scrub and disinfect frequently, get this. This time last year I was genuinely feeling sorry for myself and every night I would dread going back to work in the morning and continuing to torture my aching, sore hands. Nothing worked, at least not for long. I've tried creams, prescription ointments, wraps, oil soaks, gloves, lanolin, butters, layering products. Lemony Flutter was good, but this gives me healthy and pretty hands with zero work. I will keep repurchasing, and I'm actually encouraged to try out LUSH'S other moisturisers now.

I LOVE THIS HAND CREAM! Smells weird but oh my word, it softens even the heels on your feet as well as your hands! Love love loooove youuu!

I was intoroduced to this product when I made a LUSH order and I received this as a sample in my package. I just fell in love with the fragrance first and the thick texture. This is the best moisturizer for my hands- hands down. I really works for me and I will purchase full size pot as summer is over and I can feel it on my hands.

Bought this on a complete whim when visiting my local store to repurchase my facial moisturiser. For as long as I can remember I have had incredibly dry hands all year round which get particularly bad during late autumn/winter, at which point they crack and bleed (not pleasant), so I'm always on the lookout for a really good hand cream. I've tried loads in the past but never found anything that really works - they usually just seems to settle in the cracks and feel really greasy, and I'm back to square one every time I have to wash my hands. THIS however, has become my saviour - my hands actually look human (rather than reptilian) for once!! I've had this for a couple of months now and I've been using it most days and my hands feel so silky soft. I noticed a difference immediately after the first use but was sceptical about how it would hold up with hand-washing, and just facing the elements but I can honestly say my hands have never looked or felt better. Now admittedly I can't vouch for how well it performs in the winter months when my hands are at their worst, but we'll soon see how it fares. I've seen some other reviews that have mentioned this product feeling quite thick/greasy, and I can definitely see how it could be on hands that are already in decent condition, but with the state that my hands were in, I've found it sinks in quite quickly and still feels moisturising for hours afterwards. As for the smell, I really like it - it is quite an earthy scent and does linger for a while but personally I think it's quite pleasant - think that iconic Play Doh smell but a lil more medicinal. All in all I'd 100% recommend to anyone with dry hands and can safely say I will be repurchasing this time and time again.

This stuff is reasonable pricey but i think its worth it and would definitely repurchase once my current pot is over! I love to lather this on before bedtime as i am prone to very dry hands that are the bane of my life. This stuff is great if you dont mind the rather strong smell (that i actually dont find unpleasant but is strong nonetheless) and the slight greasiness at first- until it starts to soak in and work its magic.

I have dry, red, itchy and irritated skin on my hands , that is prone to cracking and bleeding. this lotion is Great If you don't get a long lasting headache from The super-strong scent. It works Great on my hands , but i feel so ill from The strong scent , i can't use it. If you're allergic or such, stay away! update: After a while you get used to the smell, it dies of a little the more the pot is opened. Works great for my hands, they're not as dry and cracked anymore. good for usage during the night, since the lotion is quite thick. If you can handle scents, I recommend it!

This is strong stuff! When you first open it, you're hit with this very strong scent. I'd describe the scent as vaguely &quot;masculine&quot;. Once you actually put it on your hands, the scent intensifies and after a couple minutes it goes away. It moisturizes well. It's really thick, and you don't need a lot. I mostly use it at night or while I'm doing something hands free, since it can take a while to absorb.

For the last couple of months I've been using this as a night treatment, and without fail, every morning my hands are well-moisturised and the skin is plump. I wash my hands a lot, and overnight they miraculously recover. I wouldn't use this during the day because I favour non-oily hand creams for the office: Elizabeth Arden or Aveda. Handy Gurugu sits on my bedside table. I agree that it has a medicinal smell. I've come to be quite calmed by it, but it's strong. Looking at the ingredients, perhaps it's camomile and oak moss. Since it does such a great job overnight, I'll definitely re-buy. As you don't need a lot, it lasts a while.

I've sampled this one many times and it's consistent. Smells nice (might be too strong for some) it's not a lemon or flowery smell - it's sweet herbs (if that makes any sense). A little goes a long way - rich but not heavy. I use as a night time hand and foot cream for a few weeks. Works great! My cuticles are in tact, no winter snaggles. My feet are nice and smooth, not ashy and rough.

lovely scented hand cream, nice and rich but not too greasy. absorbs well and my dry hands love this formula. if I could change one thing it would be the jar, a pump action bottle would be so much easier. would make a nice gift for a female friend, as the scent is a little to powdery to suit men.