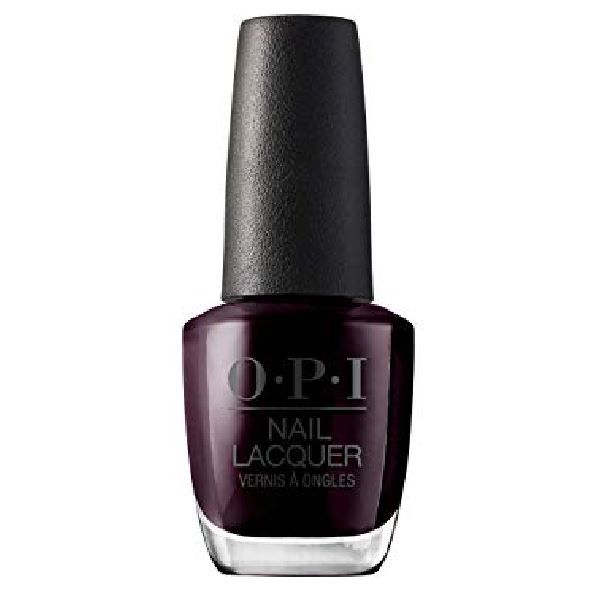 This is a really pretty black cherry polish. It is so dark that it almost looks black from afar, but when you get closer and especially in sunlight, you can see the real beauty of this deep rich dark black cherry color. This is a sultry sexy grown up color. It has subtle shimmers in it and that adds depth and dimension to this look. The formula on this is great and it covers completely in two thin coats. I did have trouble though with the initial coat of polish as it tended to want to run into my cuticles. The formula is not thin or watery and runny so I don't know why I was having trouble. This has been on my wish list for quite some time and I finally picked it up at HEB. I am so happy I did! I see now why this has been around for years, it's a classic and perfect for any time of year. Clean up is easy and this did not stain my nails or discolor my cuticles. I wore this for 4 days and only had a little bit of normal tip wear and no chipping. I really love this vampy shade on me. It's got that warmth that keeps it from looking harsh and cold even though it's very dark and I am fair. I love how it sparkles and come to life in the sunlight.

This might be my favourite OPI colour of all time. It really is like a black cherry - very deep reddy purple with a hint of shimmer. The shimmer is so fine this almost looks like a creme. It goes on opaque in two thin coats and I have never had a problem with the formula. I repurchased after my bottle which I'd had for many years dried out and the colour and formula seemed consistent. Great for fall and winter, really dramatic and vampy, yet sophisticated. A classic.

Love this color! Super dark shiny vampy color with a hint of a reddish wine shimmer! A very stunning color for the fall/ winter months. Cant believe how shiny it is. I have over 300 colors and this is a top favorite!

This color is the most beautiful, dark wine color - especially under the light. It has the most gorgeous glimmer and makes pale hands, paler! Definitely a vampy kind of color. However I find this hard to apply, it's difficult to work dark colors to make them look neat and polished, it's less forgiving when the polish seeps slightly into the nail beds, and requires a really good double layer with top coat, or else it loses its sheen after a a day or two. For that reason, I'm giving it 4 stars, just because I believe a good nail polish should be easy to apply.

I own a lot of vampy, almost black but not black polishes. For some reason, this is one of my favs. Something about that subtle ruby/plum shimmer just really does it for me. When you catch this polish in the light it's just gorgeous. Application was not the best. The first coat applied kind of streaky but evened out completely on the second coat. This is one of my go to dark polish's. I love it.

This is an edited review. This colour has grown on me a bit. The rating is the same, just a slightly changed description. The name &quot;black cherry&quot; is fitting. This is a blackened plummy-berry colour, and I do mean blackened. It's DARK. In most light, it's off-black, and the plum-berry shimmer is quite hidden. In direct or bright light, the shimmer is visible, but only just. It's not as pretty as I was hoping, based on the swatches and promo shots I'd seen. I do spend most of my time in indirect light, and I did expect this to be dark, but I had hoped to get a little more occasional shimmer out of it. Unfortunately, unless I'm in very direct light or the sun, it's just an off-black. I wore this polish when I first got it, and then let it languish in my collection for years. I was pretty underwhelmed by it, very &quot;meh&quot; about the whole thing. I even put this in my &quot;give away&quot; box, where it stayed for months. Then, one day, I started to really crave a super dark red with shimmer, and I started shopping around, looking at reviews and swatches, but my mind kept coming back to this in a sort of, &quot;Well, you already HAVE it,&quot; sort of way, and I gave it another chance. I'm a bit more well disposed toward this polish now, having made myself keep it on for a minimum of 24 hours, but the turning point was when I put on a ring I hadn't worn for a while, one which has a large, cabochon cut garnet in it, and I noticed that the nail polish has similar qualities to the garnet (which looks black in a lot of light, but has a lovely deep red inner glow). Truth is, I still wish this polish had more visible shimmer, but I feel a little less unimpressed with this now. I know, high praise, right? But, I finally decided, this is an okay polish for occasional wear when I'm just in the right mood (and it looks great with the aforementioned garnet ring, I must say). I will also note that this polish makes a pretty good base for flakies, which tend to bring out the plum-berry colour. This does look nice with my pale, cool complexion, and it's got a very nice, smooth formula. One coat is a little thin, but the plummy character of the polish is more visible with just one coat. The second coat evens it out, but pushes it right into that warm, off-black. So, I'm still not super thrilled with this one, and I probably won't wear it often, but my slightly-negative-neutral view of it has moved to somewhat-positive-neutral now. if you need an off-black with good formulation and very occasional flashes of plum-berry shimmer, this is a good choice, but if you have anything like that already, you can give this a miss. It's basically just an off-black with rarely seen plummy shimmer and decent formulation, and not much else.

Love, love, love it. I owe a lot of burgundy nailpolishes but this have been a favourite since the moment I got it. From a distant it 'just' looks purple/brownish, but up close you can see a gorgeous red/purple/ruby shimmer in it which gives it a amazing, warm glow and creates a lot of depth. Opaque in 2 coats. Dry time is one of the shortest I've experienced. Stays on my nails for about 5 days without getting major chips, which is quite something for me. Briefly, what is not to like?! If you love vampy polishes, this is the one for you.

Gorgeous colour...one that cannot be compared to anything Ive owned before. Sure its dark like the Lincoln Parks but its much more than those IMO. Its definitely on the red, ruby, burgundy palette &amp; not purple. But it has such depth due to the subtle sparkle which you really only get to see in the light. In the sun, its AMAZING. A #1 colour for fall &amp; winter for sure but really, this colour is so beautiful you could wear it all year round. Its opaque in 2 coats &amp; dries fairly quickly compared to the creme finish varnishes from OPI. A real sophisticated shade for those that love dark nails but with some attitude &amp; vamp. Highly recommended.

I adore this colour - one of my faves of the OPI line. I love it on toes! It wears well if you use a good topcoat. It's a dark blackened bordeaux with miniscule shimmer. Truly pretty. Very dark so if you do not like dark colours then it will not be for you. One of my HG colours for pedicures.

Dark vampy colour, I like it a lot but then I can't wear it for more than a couple of days without getting bored with it. Not the most original but still quite autumnal and classy.