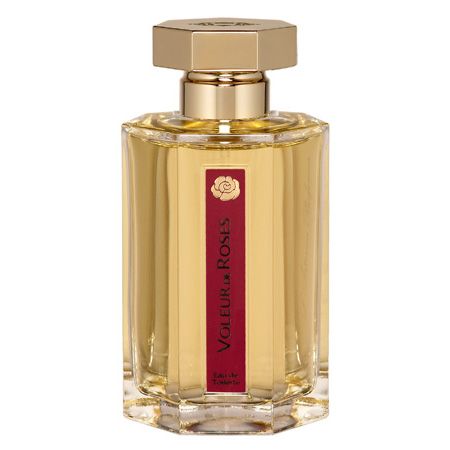 Quite possibly my current favorite modern perfume. My bottle of Voleur de Roses is an older bottle whose ingredients are merely listed as SD alcohol, deionized water, fragrance. Unisex and addictive, austere, but rich; however, if you are a person who needs sweetness in fragrance, this is not it. Another reviewer below, gingerbread girl, described it as &quot;Prometheian Fire of Roses.&quot; Even though I am NOT a fan of the L'Artisan line or of the ubiquitous use of patchouli (which seems everywhere now, from a chocolate gourmand clean patchouli to a substitute for oak moss in modern 'chypre' along with rhubarb leaves) VdR's rose patchouli plum cedar mixture is elemental, and somehow transcends perfume. On my skin chemistry, irrespective of weather or other circumstances, Voleur de Roses always smells the same. It retains it's rose character modified by moist earth, rose patchouli (it's not head shop patchouli, but not white patchouli stripped of character either), plum, pepper and camphorous cedar. VdR's opening is welcomingly cedar sharp, with a subtle, comfortingly dark rose coming quickly upon its heels. It's not dark in the 'modern sense,' where elements, such as incense, tabacco, oud, spice, wood, animalic or leather that overpower the rose accord, such as Lyric Woman (which is less rosy than Lyric. Man); lutens MKK; or Fumerie Turque). VdR is also not overly green or phenolic/leather/ birch tar (Piguet Bandit is too phenolic on my skin; chanel cuir de russie and caron Yatagan challenging but doable; vintage Cabouchard, vintage Tabac Blond extrait or vintage Aromatics Elixir, no leather problem). VdR's Dry down is wonderful, almost creamy, a bit fruity, a bit peppery, maybe plum, maybe a hint of unsweetened chocolate and dark old world red wine like Barolo. Despite these edible effects, VdR retains it's rose character and miraculously doesn't read as gourmand because it's not as sweet (I find MF Kurdjian's Lumiere Noire too sweet and lady Vengeance too sweet and plastic doll head) The dry down is relatively linear, warm, rounded, soft fading of top and middle notes. It's lack of sweetness doesn't ended it as particularly masculine, IMO, but I am a woman who wears a variety of scents, including men's cologne. I do prefer VdR to other gender bending modern rose chypre fragrances, that have been labelled as masculine, such as the very different citrus peppery Le Labo's Rose 31 (some citrus turns candied and artificial on me) or Rosine's more animalic but still curiously thin, Rose de homme. The type of person who wears unisex Voleur today, might have worn the more recognizably masculine cologne azzaro acteur in 1989 (Acteur opens with a blast of nutmeg, smoke, incense, birch tar blast that dries down to a more classic men's cologne scented with rose. (Acteur has more of a hint of pungent raw earthiness that does give me some pause in the opening). Other reviewers have compared VdR to lutens Rose de Nuit or shiseido Feminitie de bois which I find puzzling. VdR is nothing like lutens rose de nuit (RdN is, IMO, more animalic, perhaps a warmer amped up version of the greener, cooler original Agent Provocateur in the weird pink egg bottle) Nor do I get any similarity to Shiseido Feminitie de Bois (which on my skin becomes much sweeter and more femme; FdB is a tawny port or sherry compared to Voleur's Barolo or Une Rose's white Burgundy. If FdB is the level of sweetness you need, I would NOT recommend VdR. (I do like and own a FB of Shiseido FdB which was the precursor to the Luten's Bois line including Lutens FdB). Since other reviewers have had issues with VdR that are so different from my many experiences of VdR, I think skin chemistry must play a role. I recommend to test a sample before purchase, (easily available -- and wait for the dry down. If I couldn't find an older bottle, I am reasonably sure that I would purchase a newer bottle which appears on line for far more reasonable prices than in boutiques. Note: if VdR is not dark enough for you, try aromatics elixir in vintage form which I find both tannic, earthy, verging on root -like, but not quite tumbling over the edge.

I have been on a quest for the perfect &quot;dark rose&quot; fragrance and even though I've tried Frederic Malle - Une Rose, Pasteum Rose, and various Rose Chypres, this is still my favorite rose so far. The other reviews are accurate, it can change each time you wear it - sometimes rose, sometimes plum, sometimes patchouli depending on your chemistry any given day, but it still has that dark, earthy rose quality that stands out from all the others I have tried. I still want to try Serge Lutens - Rose De Nuit and if that fails then Voleur de Roses might just be the one for me.

Wet, earthy, sexy, dirtyish rose. Marketed as unisex, but one of the few florals I would find extremely sexy on the right man while not wanting to also wear it myself. It's very deep because of the rose-plum-patchouli combination, and to be honest, that combination isn't me. I love all three notes, and I am a huge fan of rose-patch scents (Juliette Has a Gun...) but the plummy note in this one makes it a bit overpowering on me. In addition, bergamot never lightens up a fragrance on my skin, and this is no exception. Therefore Voleur de Roses is all heaviness on me, but this scent is one I can totally see working on the right man (or woman). We were just meant to be acquaintances.

Wet, earthy rose. Surprised to see it is marketed to men...it seems a strong feminine to me. I would like it but for the opening, which is unpleasantly acidic. The drydown is nice, though, and lasts on me for around four hours, which is quite good for an EDT. Overall, not for me but worth trying, especially if you are a rose fan.

This is my favorite rose so far in my rosy-fragrance experimentation phase. This is the kind of rose that makes me imagine the Queen in Alice and Wonderland, and the playing cards getting yelled at for painting the roses red. This smells of a real rose bush--of dew, earthiness, and blood-red roses. Very mysterious feme-fatale rose--not a fresh or light rose. I am tempted to be a rose thief when I smell this. It has a slight naughtiness to it that reminds me of when I was a little girl and I stole my neighbors' roses. EDIT: I wore this again, and this time it was a pure patchouli bomb. This is one of those schizophrenic fragrances that emphasizes different notes each time I wear it, and because of that, I don't think I'd ever get a full bottle.

Because I liked Drole de Rose, I thought this would be a more exotic, mysterious rose frag. Wrong. It smelled exactly like dirt, black, Tim Burton-type evil dirt from Sleepy Hollow Cemetary, nothing like lovely soil that beautiful flowers grow from. In desperation, because I didn't want to throw away a nearly-full bottle, I tried layering it w/&quot;Stella&quot; and, wonder of wonders, the beast was tamed. But I still wouldn't buy another bottle.

I love rose fragrances and was excited to give this one a try. What transpired after I sprayed this on my arm was the smell of roses for about 30 seconds and then all I could smell was patchouli which I am not a big fan of, especially in larger doses as evidenced in this perfume. To me it smells like a cross between bad underarm BO and the scent you would smell in the room if you went to see some kind of gypsy tarot card reader. Just way too earthy for me. There are many, many rose perfumes that I love or like, but this one will not be added to that list. Pass.

I am sorry to disagree with most of the people here, but unless I got a bad decant, this smells nothing like a rose to me. At first sniff, I get a vine note - wine in a cellar, not in a bottle. Lots of moist (like in a cellar) - I live in a countryside full of vineyards and wine makers so I know what I am talking about. Something fermentating... Then it is very watery to me, probably the rose is hidden there, but it does not smell like a classical rose to me. I get a plum note, though (a candied one). And then fresh grapes, again. On my skin it is awful (smells like rotten wood, I find it unpleasant ) but is somewhat interesting when sprayed on paper - so i guess some skins react better than mine to this frag. It is defintely a man fragrance, very dry - I do not even get the sweet patchouli everybody mentions here.... some sweet note in the drydown after some hours...it does not show up earlier on me. I am really doubtful... provided that I got a good decant, this for me is a big NO. It is quite original - the blending together of such cacophonic notes - but to me, unwearable.

This one is weird .. but in a gooooooooooood way! I don't get rose, I but I do get a plumminess mixed with something else (probably the patchouli) that takes on a whole different life of its own. The first spray is a bit much - reminds me of Opium (that 80s thing) and then the middle bit is gorgeous (and lasts a good while on me) but the drydown takes a but of a masculine turn.

Voleur de roses.I don't have it yet, but I long for it. I am suprised this is marketed for men, but mind you I think only very strong personality types. men or women,can't get away with it, with the right body chemistry of course, because just out of the bottle, I thought &quot;this stinks&quot;, but then applied on the skin, and with an amazing dry down, well, all I could think was&quot; this is sex in a bottle&quot; I tried it in a store,and went on with my shopping, when I got home that night, I kept wondering what was that addictive smell, until I realized it was me! That night, when I woke up,I could smell it on my pillow, and thought &quot; OMG, I've got to have it&quot; The next mroning I went to the store again to douze myself in it! The price tag is my only deterent at the moment, as I'm travelling aborad and I am unwilling to pay the $200 it would cost to get it here, so I have to wait until I get home, but I already know, this is going to be HG for me. Funilly enough, this is the only fragrance by L'artisan that provoked such a reaction in me- except Mandarine- the rest I find pretty ordinary.in spite of all the hype.