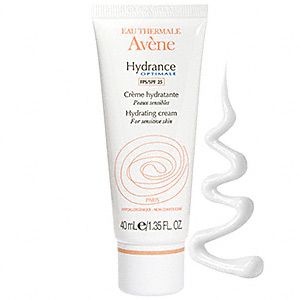 My HG daytime moisturizer. I used to never wear SPF because it made me oily and break out. This is the only moisturizer with SPF that doesn't. Anyone with combo/oily/acne-prone skin, try this moisturizer! It is very light and has a soft fragrance. In the winter, I usually dab a little of my heavier moisturizer on drier parts of my face before putting on this one.

This thing works great with my oily skin. I actually bought it mostly for the SPF. I didn't expect from a moisturizer to mattify and control the oils my skin produces, but it actually does it. I can leave the house with just this on my face - no foundation or powder - without feeling self-conscious. Also, my skin feels soft and velvety without that typical &quot;wet&quot; feeling oily skin can have (you know the one) and I can't stop touching it (yes, yes - I know I shouldn't but I can't help it, it feels so soft!). The texture of the cream is very light and it is absorbed surprisingly quickly. It is not greasy at all and it does not leave any white cast on the face. It also works great under foundation - it prevents my Maybelline Fit Me from turning me into an oily mess as it usually does. It does have a smell but it is very clean and fresh, it is quite similar to Avene's cleansing gel's smell, if you''re familiar with it. However, if you have dry skin, I'm pretty sure you'll need something &quot;heavier&quot; and richer than this. Another downside for me is I think it's a little too expensive for a 40 ml tube.

Considering Avene is supposed to be a brand that caters for people with sensitive skin, it’s surprising to me that this product contains synthetic sunscreen ingredients that are well known to be irritating. And, as one other reviewer has pointed out, it also contains Octocrylene which has been deemed unsafe for cosmetic use in many countries. I do not have sensitive skin, in fact it is quite resilient, but this caused me to break out in red bumps all around my nose and mouth. Very disappointing.

It is a good cream for sensitive skin but it absorbs very quickly and does give enough mosturisation to my dry skin.

I started using Hydrance Legere UV this fall over hydrating serum to replace my summer sunscreen. The texture is light and pleasant, I like the scent, sinks right in leaving no residue or tackiness, it's not mattifying but not shiny either. The SPF 20 is adequate for fall/winter and make up sits nicely on top. That's where the good points end. Besides not really being hydrating and despite being promoted as suitable for sensitive skin, mine becomes bright red after using it. Pass.

I'm acne prone, fair-skinned. Used this for about 5 years, never caused any skin issues, redness, drying or itching. No white residue. Everything was great! So I thought. EUs Scientific Committee on Consumer Safety has estimated that Cyclopentasiloxane is not safe in many respects for use in cosmetic products. It has been shown that Cyclopentasiloxane in high concentrations has a negative effect on the liver and respiratory organs and Cyclotetrasiloxane is suspected to affect fertility. Our largest drug store here in Sweden actually removed all products containing cyclic silicones. This is one of the products that was on the list. I'm definitely not using this in the future.

I like Avene. But unfortunately if you get the crappy American reformulations, they suck. It gives my skin little white clusters of small but hard pimples and it's everytime I get anything Avene from Derma stores. (which I am convinced it's because they carry only the American formulas and packaging.) I've bought both the American...I'm assuming which had English translations either directly on the box or on the tube. Then I bought the other &quot;European&quot; ones with just French and other germanic languages (?) on it, there is absolutely nothing in English on these tubes, box's, or papers inside. Avene that I've found like this leaves my skin radiant with a glowing dewy radiant complexion. It brings out the golden tones cancels redness, absorbs literally in seconds, doesn't smell like sunscreen, and hydrates beautifully... I adore this as my makeup base. Also it provides the basic spf solar protection which is it's only downside, if they provided a 5o spf they would be hard competition for LRP anthelios spf 50. Which I might have to get next since I live in the mountains . ???? I've actually gotten this light version one for combination skin and also a completely different product Avene tolerance extreme from the Derma store and it just sits on top of your skin and doesn't absorb, and I've noticed mineral oil in them. I've bought these alot from other small owned french dermatologist stands and they didn't do this. They never broke me out. Beware. Avene shouldn't break you out they shouldn't have bad formulas since they pride themselves on there scientific medical centers and research. What's going on why does America have different ones. I know it wasn't expired either. I give the French on let four star on star off for price and the American one I would give a one. Don't buy this one.

This is amazing. Seriously. My skin is a nightmare for finding any suitable beauty products, it's super sensitive and parts of my skin are acne-prone, oily, and dry. While I only had mild acne, it was still there, and was aggravated so much by moisturisers that for a while I could not use any. Cheaper products like Simple kind of worked in terms of protecting my skin, but did nothing to actually improve my skin quality. Initially I thought this product was too expensive, though having seen how effective it is I would happily pay the price (also it lasts much longer than you would expect). I saw an immediate change in my skin, and for the two months I've been using it has continued to gradually improve. The dry and oily parts of my skin are correcting themselves. My acne is not irritated at all and has shown a significant improvement. The cream is very plain which I like. It doesn't have any funny scents added to it. Overall it seems very neutral. It also doesn't sting at all on application which I experienced in the past. Everything about it feels good. This is also the only moisturiser including spf I have been able to use without aggravating my acne. I would highly recommend this to anyone with sensitive skin or those with a combination of skin problems.

This is a review for the product sold in Europe under the name Hydrance Optimale UV légère. I basically first bought this because it was recommended by Lisa Eldridge in one of her videos and have since repurchased it two times. Its role was actually described as a light, broad-spectrum sunscreen more than a moisturizer, which is also how I tend to use it. It absorbs quickly even if I apply generous amounts, does not leave a white cast and is pretty much undetectable on my skin. I apply primer and foundation on top of it with no problems. It also does not break me out or cause clogged pores (some sunscreens tend to do that to my fairly sensitive skin). It does have a light scent (something herbal and inoffensive, not a sunscreen smell) but it does not linger after application. Because it is SPF 20, I normally use it in autumn/winter or whenever the UV index is lower than 4-5. I wish Avene provided a PA rating for this, I'd be very interested to know what protection, if any, it gives against UVA. At least one of its ingredients (bis-ethylhexyloxyphenol methoxyphenyl triazine, or Tinosorb S) is supposed to provide UVA protection.

I have extremely sensitive skin and was about to guve up on moisturiser altogether as my skin would I burn and breakout no matter which moisturiser I would apply. I was surfing the internet one night and came across this brand. I thought I would give it one last go and ordered this cream. I'm so glad I did because so far it's all good and i haven't broken out or got pimples or a burning sensation. It's just great. The only downfall for me is that it doesn't feel hydrating enough so next time I repurchase I may get the one for dry skin. I would highly recommend for those with super sensitive skin! Thumbs up.